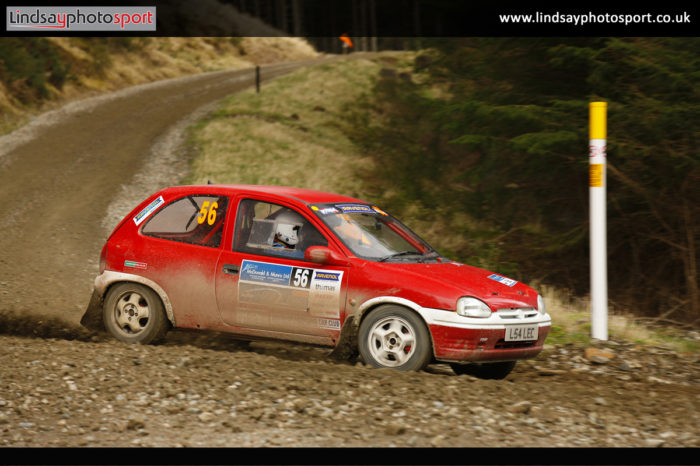 Dumfries driver Scott Sloan suffered a major setback and heartbreak back in June where competing on the DMACK Carlisle Stages, his Vauxhall Corsa was destroyed by a fire.

The Carlisle Stages was a round of the BTRDA, a championship which Sloan wanted to compete in as well as the ARR Craib Scottish Rally Championship in 2016.

Scott recalled: “Things were starting to go well for us with a win on the [McDonald & Munro] Speyside Stages and a very close battle on the Plains leaving us two seconds shy of a podium.

“All early signs were pointing to a great year ahead until disaster struck on the Carlisle Stages. After a promising start to the event we went into the second stage on a charge but unfortunately we hit something which burst the exhaust and punctured the fuel tank.

“When we reached the time control at the end of the stage fuel under the car ignited. After a frantic effort to use what extinguisher we had there was nothing we could do to save the car we built up over five years.

“The fire left nothing salvageable on the car.”

Despite Scott being left without a car to rally in, a return in 2017 has become increasingly likely thanks to crowd funding. Sloan set up a page with the help of a fellow competitor and managed to raise £1180, a sum of money he calls “amazing.”

He said: “Until the accident I knew nothing about crowd funding, and it was a fellow competitor who set up the page. I was blown away by the reaction to the page and am truly grateful to everyone for their support. It shows how generous and kind the rallying family is.”

Since the accident and thanks to the funding, Scott has now begun the rebuild process.

He explained: “I have got a new Corsa shell with a roll cage and few other bits and bobs with it. The main objectives at the moment are tidying up the shell, a bit of welding and sorting out the wiring loom.

“The most time consuming part of the rebuild comes down to finances, and as and when I can afford to buy the more expensive bits for the car. But there is plenty to keep me busy in the mean time!”

Despite having made some significant progress in rebuilding his new Vauxhall, Scott couldn’t confirm when he’d be back out on the stages, but hoped to make a return in 2017.

“I have high hopes of making a return at the beginning of next year but whether it’s before then or slightly later I’ll be doing my best to get out as quickly as possible.”

Now just two months on from the incident, it’s incredible to hear how much progress Scott has made, and it really is testament to the rallying community.

Scott said: “After seeing the car on fire I had to start coming to terms with the fact I wouldn’t be rallying again for years and years, but in the days and weeks that followed the support that I received and I am continuing to receive has been amazing and has brought the dream back to life.

“I would like to say a massive thank you to everyone. I am truly grateful and will do my best to be back out on the stages soon.”

Sloan won’t be out for a few months yet, but the rest of the SRC will next be in action on the Coltel Grampian Stages in Aberdeenshire on 13 August.