Grampian Stages poised to be a classic 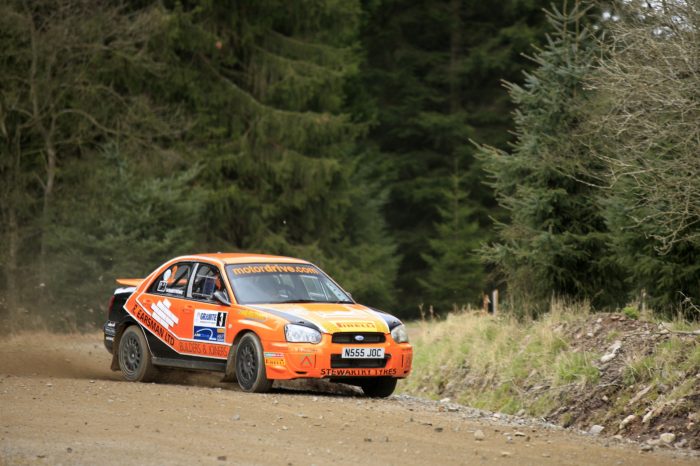 After almost a two month break, the 2016 ARR Craib MSA Scottish Rally Championship returns on Saturday 13th August for round 5 of the season, the Coltel Grampain Stages rally.

The Grampian Stages, based in Banchory, Aberdeenshire, is the newest round on the SRC calendar, and will start and finish in the grounds of Crathes Castle.

The event has attracted a capacity of entry list of over 90 cars, including three R5 machines and two World Rally cars.

The stages are run in the Kincardineshire forests to the south-west of Aberdeen, on similar roads to those of the former Granite City rally, which witnessed one of the most thrilling battles in recent history between David Bogie (Fiesta R5+) and Dave Weston Jr (Impreza WRC).

The battle for the overall win this weekend has been spiced up by the entries of Weston Jr (Impreza WRC) and 2014 ARR Craib Scottish Rally Champion Euan Thorburn (Peugeot 208 T16 R5).

However Weston Jr and Thorburn would be foolish to think they’ll have it all their own way, with the SRC contingent looking to stamp their authority and few are a stronger force to be reckoned with than defending SRC champions Jock Armstrong and Paula Swinscoe in their Subaru Impreza.

After taking victory on round 2 in Jedburgh, the pair haven’t been able to stop a rampant Garry Pearson who has taken the last two wins on the Speyside and the Scottish.

Beating Pearson is a must if Jock is to take his second Scottish Championship title, but Armstrong is in fighting spirit.

Jock said: “We want to win on the Grampian and we have stepped up a level with the car, with Teg Sport helping us on the engine and mapping side, so it’s down to us now. It’s going to make the last round [Galloway Hills, Jock’s home event] interesting and memorable if the title is decided there.

“To retain our title is not going to be easy, but that’s why you do a championship. I like the competition and the buzz when winning in my older car.

“Garry has been going well and has been consistent, but it’s taken me a few years to get this title so we are determined to keep a hold of it.”

Having only finished off the podium once in 2016, the duo are the ones to beat heading to the Grampian, and could provisionally clinch their maiden Scottish Rally Championship title in Aberdeenshire if they win the Grampian.

Garry said: “We’ve always thought about it [the championship] for sure but the only way we approach the rallies is event by event. We’ve two events remaining and in rallying anything can happen.

“We can’t wait to get back out on the stages, it sounds like they’re going to be in top form so we can’t wait!”

Garry’s Fiesta will return to the colour scheme it donned on the Borders and the Speyside after being painted white for the Scottish rally last time out. The Duns driver ran a poll on Twitter where the fans chose black over white.

Pearson added: “It’s great that the fans can have some input. I think the black certainly goes with our sponsors logos and sets us apart from the cars around us.”

Mike Faulkner and Peter Foy were arguably one of the unluckiest crews on the Scottish after missing out on Armstrong and Swinscoe’s second place by less than a second, but the Dumfries event marked a return to form for the pair who are extracting everything they can from their class 11 Mitsubishi.

After a slow start to the year, Mike is now back up to fourth in the championship and another podium if not a rally win will be the goal on the Grampian.

John MacCrone and Rhianon Gelsomino are in the cabin of the second of the two Fiesta R5’s entered in the Coltel Grampian Stages. The Tobermory driver missed the recent Scottish rally due to a lack of funding but is making a welcome return on round 5 of the championship.

John said: “It’s been nearly four months since we last sat in the Fiesta R5 so no doubt it’ll take a few miles to get back into it. Hopefully once the first stage is out of the way and we blow off a few cobwebs we can carry on as we left off on the Speyside!”

The duo have been devoid of luck thus far in 2016, but came perilously close to a podium finish on the Speyside Stages, setting impressive stage times on their way to fourth overall. They could be a dark horse for a victory on the stages around Aberdeen.

MacCrone added: “It’s a very strong line up but we will be giving it our best to mix it with the top guys. You need to be on it from the word go, but our confidence is high after the last run [the Speyside] and as long as the feeling comes I’m sure we can take another step forward on the Grampian.”

Mark McCulloch and Michael Hendry head to Aberdeen in buoyant form after a fourth place finish on Mark’s home event. The Mitsubishi Evo IX crew are currently sitting third in the championship, but have a charging Faulkner and Foy right behind them so will have their work cut out to stay ahead after the Grampian.

Bruce McCombie and Michael Coutts have enjoyed their way to fifth in the 2016 standings, and are ones to watch this weekend with the Grampian being Bruce’s home event.

McCombie is from the rally base of Banchory, meaning he can count on plenty of local support to give him a boost aboard his Mitsubishi Lancer Evolution IX.

Bruce is striving to close the gap to the frontrunners and there’s no better place to do that than on his home event.

Stonehaven’s Barry Groundwater has been one of the most solid points scorers this year in his Mitsubishi Lancer Evolution X.

With Elgin’s Neil Shanks back in the co-drivers’ seat after missing the Scottish due to other commitments, Groundwater will be looking for a strong points haul from his home rally.

Shaun Sinclair has had a difficult 2016 SRC campaign aboard his Subaru Impreza WRC, despite a podium finish on the Border Counties at the wheel of a Ford Focus RS WRC.

The ex-Petter Solberg machine which he has used on all but one of the year’s rallies has been dogged with various issues throughout the season, but Shaun saw the funny side on the Scottish reporting at the passage control exiting SS5: “You know you’ve made it when you start enjoying your breakdowns!”

The Connell driver will hope for a clean run on the Grampian.

Fred Milne and co-driver Chris Williams will be another crew to keep a close eye on in the Aberdeenshire forests, with this being Milne’s home rally.

Fred has shown flashes of incredible pace this year since returning to the SRC in April for the Speyside Stages. He bagged a solid ninth place finish in his ex-Barry Groundwater Mitsubishi before failing to finish the Scottish despite a great turn of speed.

Milne and Williams could be dark horses for a very strong result.

Scott McCombie and Mark Fisher are another one of the strong Mitsubishi contingent in the SRC, and find themselves equal ninth in the championship standings following an eighth place finish last time out on the Scottish.

With a few drivers missing from the Grampian entry list, Banchory’s very own McCombie will be looking to use his home advantage to better his season best result of seventh from the Snowman and come out on top of the epic battle within the SRC Challengers.

With Donnie MacDonald, Dale Robertson and Andrew Gallacher, who are all currently sitting in the top 10 of the championship, not competing this weekend, it opens the door for a few others to score big points.

Look out for John Wink/John Forrest, Alasdair Grahm/Laura Stuart, Ross MacDonald/Matthew Johnstone, Iain Wilson/Keith Riddick and Scott Mutch/Greg McDonald who are making their final 2016 SRC appearance. The rally promises to be a great one.