Battles going down to the wire in Classes Championships 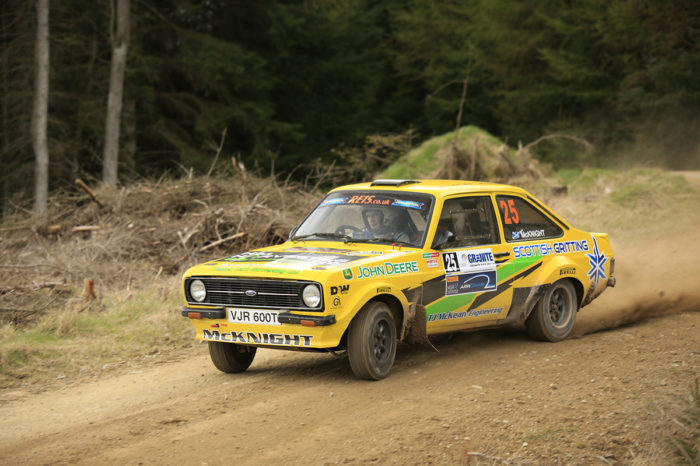 The Coltel Grampian Stages, organised by Stonehaven and District Motor Club, is set to host round 5 of the 2016 ARR Craib MSA Scottish Rally Championship this weekend on August 13.

The Grampian is the newest event on the Scottish calendar, and is based in Banchory starting and finishing in front of Crathes Castle.

The SRC contingent won’t have time to stop and admire the architecture however as the battles within the classes are heating up as we reach the business end of the 2016 season.

Angus Lawrie and Paul Gribben lead the class 2 championship with three victories from four in their Vauxhall Corsa 1400. The Castle Douglas driver holds an 11 point advantage over Portree crew Grant MacRae and Martin Bruce (Peugeot 205), with Carluke’s Ross Carbry hoping he can reach the top step in his Corsa.

The Peugoet 205 infested class 3 championship is once again looking like one of the classes to watch this season. Bridge of Dee’s Donald Peacock is at the front of the pack in the starting order and in the championship with two class wins to his name, including victory on the Scottish rally in June.

However Dundee’s Robbie Beattie won’t be far behind in his similar Peugeot, with Chris Collie and co-driver Richard Crozier keeping the pair honest in their Peugeot after missing the last three rallies. Collie is a proven force in the SRC and so the class 3 title hopefuls will have their work cut out to beat the local driver.

Class 5 has been all about Andy Struthers versus John McIlwraith, with the pair battling their 8v Ford Escorts on over 100 miles of Scottish forest stages this season.

McIlwraith missed the Snowman, but the Canonbie driver, co-driven by Duns’ Scott Young has two class wins to Struthers’ one, but Andy won on the Scottish, so it couldn’t be any harder to predict.

The duo will have John O’Kane (Kyle of Lochalsh) and Calum Fraser (Inverness) for company on the Grampian as well as a couple of local drivers.

Class 6 for historic specification vehicles has once again seen just one Scottish Rally Championship entry, from championship leader Alex Ian Milne (Brechin). He does however face class opposition on the Grampian but not for SRC points.

Class 7 for front wheel driver machines with engines between 1.65 and 2 litres meanwhile has been much more tightly contested over the course of 2016.

Kevin Gray from Invergordon heads the battle in his yellow Vauxhall Astra from Caroline Carslaw’s Fiesta ST. However it is a different Fiesta that will be battling Gray and co-driver Daniel Chrisitie on the Grampian.

Blanefield’s Luke McLaren has entered in a class 7 Fiesta for the Grampian, having contested 2016 in a class 3 Peugeot. McLaren, co-driven by Sunderland’s Phil Kenny, has been in the thick of the class 3 battle so it will be interesting to see how he goes in the more powerful Fiesta.

Gray and McLaren will wade into battle with a local contingent of Ford Fiestas and Peugeot 306s.

Heading the entry list in class 8 is the Inverness pairing of Dougal Brown and Lewis Rochford, making a welcome return to the championship after missing the Scottish. The duo were last in action on the Speyside, where they took a class win after an enthralling battle with the non SRC registered Quintin Milne.

Championship leaders Grant Inglis and Robert Gray from Glasgow will be looking to defend that championship lead on the penultimate round in their similar Escort Mk2, with the striking orange Escort of Portree crew Duncan MacDonald and Neil Ross looking for a strong result to close that points gap.

Hamilton’s Keith Seager sits level on points with leaders Inglis and Gray in his BMW 318i Compact after a consistent season, but is yet to win an event in 2016.

Class 9 for larger engine RWD machines was won by Perth’s Gordon Murray in his Ford Escort Mk2 on the Scottish rally, and he will be looking to add a second win to his tally this weekend with Duns co-driver David O’Brien alongside.

the Snowman and Border Counties, with local driver Scott Kerr (Stonehaven) looking to beat the pair of them and take a popular home victory in his Escort.

The Group N class 10 battle has been intriguing in 2016, with pre-season favourites Fraser Wilson and John Morrison not having it their own way.

While Morrison has completed a bit-part campaign, Wilson from Port William has had a season dogged with mechanical issues in his Mitsubishi Lancer Evolution IX. He won the Speyside but crashed out of the Scottish, meaning he is 12 points off the series lead.

Paisley driver Alasdair Graham heads the championship with Alford’s Laura Stuart in what has been a very impressive season for the pair.

Graham has taken two class wins in his first year with the Mitsubishi, and is keen to take the class 10 championship so will be motivated for a strong result on the Grampian.

Making a welcome return to the SRC is Strathblane driver John McClory, whose company sponsors round 2 of the championship, the Brick & Steel Border Counties Rally. McClory will be co-driven by David Hood in his Evo IX.

The SRC Challengers has been one of the revelations of the 2016 season, with the series offering a championship for drivers who haven’t finished in the overall top 10 of an MSA event in the last 10 years. It has been a hit with the drivers and the fans with the championship far too close to call.

Alasdair Graham, Iain Wilson, Ross MacDonald, Scott McCombie and John Wink are all separated by just 24 points heading into the Grampian, with either one of these drivers capable of winning the category.

All five will compete this weekend, along with other challengers Scott Mutch, Fred Milne, Brian Watson and Scott Macbeth to name a few.

After four rounds the pair are dead level on 89 points with two class wins a piece, but Mutch and co-driver Greg McDonald won’t be competing on the final round due to personal commitments so the duo will be giving it everything to come out on top in the Kincardineshire forests.

The Coltel Grampian stages covers over 40 miles of competitive forest rallying in the forests around Aberdeen, and will be contested on Saturday 13 August.