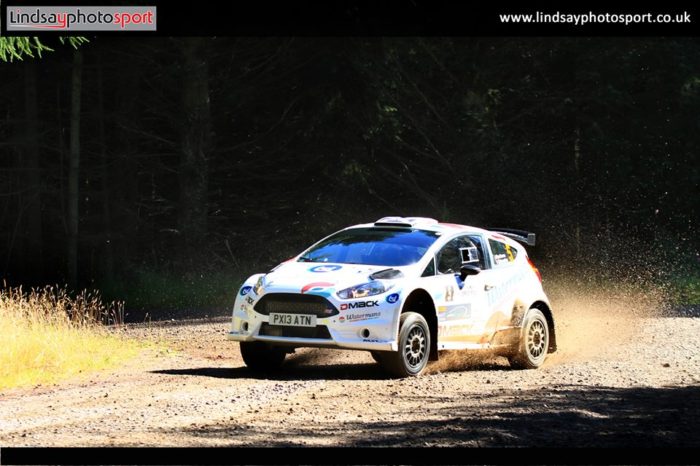 The 2016 ARR Craib Scottish Rally Championship will go down to the final round of the season after John MacCrone and Rhianon Gelsomino took victory on round 5, the Coltel Grampian Stages.

The Tobermory driver may have been doing only his first gravel rally since April’s Speyside stages, but his pace belied it taking two outright stage wins on the afternoon loop to beat fellow Fiesta driver Pearson by 23 seconds, despite entering the sixth and final special stage dead level on time with the Duns driver.

It was a long overdue result for MacCrone and Gelsomino, who suffered misfortune on all the previous three rallies they had contested this year.

At the finish at Crathes Castle, John couldn’t hide his delight.

He said: “We were quickest on the last two by quite a lot, managed to get back up to second [overall] and six seconds from the [overall] win.

“We are delighted with that. I think we were only six seconds off the pace on the first one where we had the problems with the stage mode so that’s encouraging.”

He pumped his fist and said: “The pace is coming!

The rally enjoyed a majestic backdrop, starting and finishing in the grounds of Crathes Castle, using similar forests stages to those of the former Granite City Rally.

Conditions were predominantly dry for the competitors, but rain on the previous day and at the start of SS5 did the best to catch out the unwary.

Duns pairing Garry Pearson and Robbie Mitchell were hoping of clinching their maiden Scottish Rally Championship title and the second for a Duns driver in the past three years on the Grampian Stages, but losing 23 seconds to MacCrone and Gelsomino in the final test with Armstrong behind in third meant it wasn’t to be this weekend.

However, the R5 crew still managed to extend their championship lead, and are in a great position to take that first championship on the Galloway Hills.

The pressure perhaps got to Pearson who made a few costly errors, overshoots and mistakes throughout the day that ultimately cost him the win.

Garry said: “We made a small mistake at the start of the last stage so decided to back off and just take the championship points so we’re more than happy.

“We went in to the last stage with the idea to try and push a little bit but to be honest with you John basically had nothing to lose today, it was his rally to win and he won it so we are more than happy with second.”

The Subaru driver was right on the pace from the off, but went off the road, beaching and stalling the car on SS3, the 16 miles of Drumtochty, which ultimately put him out of the battle for the win.

Come the finish the Castle Douglas driver finished 30 seconds behind Pearsons’ Fiesta and 53 from the R5 of MacCrone and Gelsomino.

If Armstrong is to retain his championship title he fought so hard for, he will need to win his home event next month.

Jock said: “I’m not sure what the calculation is but if Garry needs to take it to the final round that’s exciting for everybody.

“I’m looking forward to the last round, it is home turf for me which won’t help Garry but bringing people like John MacCrone into the mix as well, that helps the championship so you look forward to other years and other rallies.

The rally wasn’t plain sailing for Mark, who lost his rhythm on the long SS3 catching and passing Mike Faulkner and struggling initially with the wet start to SS5, but he finished just 29 seconds shy of the SRC podium.

At the finish, he said: “We’re very happy, had a good run through that last stage with a few of us tying for third fastest so can’t complain about that!

“We’re getting closer to the podium, we’ll really go for it on the Galloway Hills we’ve got no pressure now.”

Consistent, enjoying himself but wanting to be slightly closer to the front running pace, McCombie and co-driver Michael Coutts were in a good battle with McCulloch and Hendry all day, finishing just 15 seconds back after the full competitive distance.

Bruce said: “The rally was good, we had a good day. We were slow in the first two but after that it was nip and tuck with Mark, but he just pipped us. The car didn’t miss a beat.

“We’ll go to the Galloway and try and beat him on his home soil, that’s what we’re aiming for!

Groundwater is from nearby Stonehaven so the Grampian was also a home event for him, and was enjoying himself on stages that were very fast in places.

No real problems befell him, and he was rewarded with a very solid points finish.

Arguably the most disappointed crew following the Grampian will be Mike Faulkner and Peter Foy, who had a rally to forget in Aberdeenshire aboard their Mitsubishi Lancer Evolution IX.

A puncture on the 16 miles of SS3 all but ruined his day, as he lost a couple of minutes and was passed by fellow Mitsubishi driver Mark McCulloch in the stage after deciding to run on it.

Faulkner explained at the second service break: “We got a front puncture with 11 miles to go, we decided to run on it which was just too far and we’ve done quite a bit of damage, meaning the car was quite difficult to drive on the last one [SS4].”

However, after service the car was back to how he likes it, meaning Mike managed to overhaul Scott McCombie for seventh in the SRC by just two seconds.

McCombie, Bruce’s brother, was another who was on home ground on the Grampian, but “straightening the scenery” on SS4 didn’t do much to help his charge.

“It was a bit slippery, I went wide and there was a pile of logs there so it was my own fault,” he said.

Twenty seven seconds back and taking a strong result were Iain Wilson and co-driver Keith Riddick in their not so common Subaru Impreza.

His Impreza wasn’t at full health on the first loop of stages, but the boys at service got it back to full working order, which instantly gave Iain confidence in the long SS3, a stage he later described as “awesome.”

The Mitsubishi Evo IX driver was arguably one of the happiest men throughout the day, despite sweating in SS3 which caused him to slow down a little.

To round off a great weekend, Ross even won his first game of horse on the road section. He finished a mere eight seconds behind Wilson and Riddick’s Subaru.

Some drivers however didn’t fare so well on the Coltel Grampian Stages.

Despite setting some solid stage times throughout the morning, one right hander was too much for local man Fred Milne whose Evo found itself in the trees at the bottom of a bank.

It was yet another disappointing weekend for Shaun Sinclair who had Jamie Edwards alongside on the notes.

The switch from an S9 to an S14 Impreza WRC hired from McKinstry Motorsport did nothing to change his fortunes, with his Subaru grinding to a halt after making a “funny noise” on SS3.

The next and final round of the 2016 ARR Craib MSA Scottish Rally Championship is the Galloway Hills Rally, Castle Douglas, on 10 September.