Plenty of action within the classes on Grampian Stages 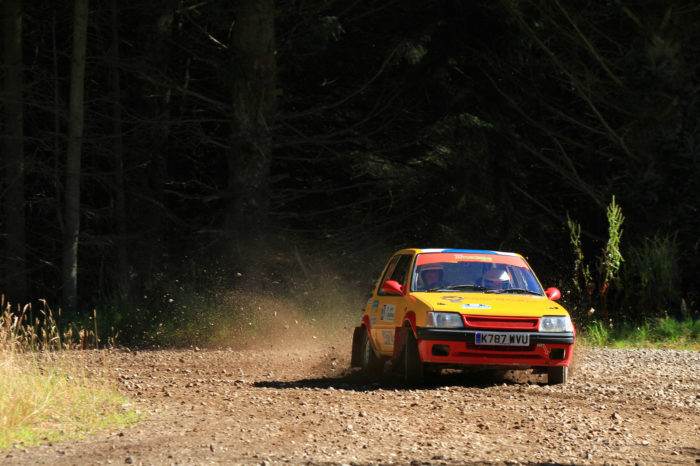 Round 5 of the 2016 ARR Craib MSA Scottish Rally Championship saw the teams and their machines head to Banchory, Aberdeenshire, for the Coltel Grampian Stages.

The Coltel Grampian Stages, organised by Stonehaven & District Motor Club, is the newest event on the SRC calendar, but uses stages similar to those of the former Granite City Rally. The event enjoyed a majestic backdrop, starting and finishing in the grounds of Crathes Castle.

The stages were very fast in places, and predominantly dry despite some rain the previous day and the odd shower in the afternoon doing its best to catch out the unwary.

Class 2 title favourites Angus Lawrie and Paul Gribben missed out on the Grampian as their Corsa developed an alternator fault, meaning the battery ran flat in the 16 miles of SS3.

Ross Carbry and Nikki Addison also failed to finish in their Corsa, ending their Grampian adventure early and off the road.

This opened the door for Grant MacRae and Martin Bruce (Portree) to take their first class win of the year after having finished second on the previous two rounds; the Speyside and the Scottish.

Craig (Drumnadrochit) and John Martin (Beauly) guided their Skoda Felicia to second in class at the finish, ahead of Steven Crockett and Martin Henderson’s Peugeot 205.

Class 3 witnessed a close battle between the Peugeot 205’s of Chris Collie and Robbie Beattie, with Collie pipping Beattie by just nine seconds after almost an hour of competitive driving.

However, Dundee driver Beattie took more points than his championship rivals to help his class 3 title aspirations, finishing 19 seconds ahead of Donald and Scott Peacock (Bridge of Dee) in a similar Peugeot 205, with local Aberdeen driver David McLoughlin taking a season best result of fourth with fellow Aberdeen co-driver Graham Robertson on the notes.

Tore’s Thomas Gray with experienced Jedburgh co-driver Dave Robson alongside stamped his authority on the class 4 championship with his second class win of the year in his Ford Fiesta R2.

The defending SRC Junior Champion defeated his rivals by over 2 minutes, with Jim Robertson (Penpont) and Colin Maxwell (Dumfries) coming home second in their Citroen C2, just 10 seconds ahead of the similar car of David Martin (Belford) and Neil Ewing (Largs).

As was the case on the Border Counties and Speyside stages, John McIlwraith (Canonbie) and Scott Young (Duns) took the class 5 win in their Mk2 Ford Escort, further strengthening their championship lead.

John O’Kane was a distant second in his similar Ford but at least finished the event, with the rest of the contenders retiring meaning there was only two class finishers.

Alex Ian Milne took the class 6 honours in his historic Ford Escort Mk2, once again this season being the only starter and finisher in the class, meaning the Brechin driver is assured of the class championship in 2016.

Kevin Gray (Invergordon) and Daniel Christie (Insch) took second in their Vauxhall Astra despite an eventful opening stage, with his Vauxhall’s front end looking rather second hand at the first service break.

Kevin explained: “Going into the first stage, on a K right I think it was, we just got a bit of opposite lock on and a wee bit sideways and managed to catch too much of the inside of the corner. There was a log pile on the inside, so it was a don’t cut corner! We rolled a couple of times but after 3-4 minutes we managed to get her back on her wheels.”

The class 8 spoils were scooped up by Inverness duo Dougal Brown and Lewis Rochford for a second time in 2016 in their Ford Escort Mk2.

Despite a front puncture on the long 16 miles of SS3, Brown and Rochford edged out rivals Duncan MacDonald and Neil Ross (Portree) in a similar Escort by under 10 seconds after six special stages.

The pair were so quick that they beat several four wheel drive cars taking 18th and 21st overall respectively.

A long way back, coming home 61st overall but third in class 8 was Hamilton’s Keith Seager and Mark Runciman from East Kilbride in their BMW 318 Compact.

However, the pair still managed to beat points leaders Grant Inglis and Robert Gray who had a torrid day in the office, finishing last of the classified finishers, 28 minutes down on overall event winner Dave Weston Jr.

Continuing where they left off on the Scottish were Gordon Murray (Perth) and David O’Brien (Duns), taking the class 9 victory in their larger engine Ford Escort Mk2.

The pair were unchallenged after Donald and Rachel Brooker retired their BMW 130i, but made an impression finishing level on time with Fraser Wilson and Craig Wallace’s Mitsubishi Lancer Evo IX.

Class 10 for Group N specification vehicles was won for a third time this year by Paisley’s Alasdair Graham and Alford’s Laura Stuart with their Evo IX Mitsubishi.

However their rally wasn’t without fault, as Alasdair explained: “We lost the clutch [on SS4], totally lost my concentration in a fast, muddy corner through the trees. I got sideways, kept it pinned to try and catch it but the nose went in, up into the air and we struggled to get it started.”

They still managed to beat Wilson and Wallace who finished second in class however, with this being a disappointing and frustrating season for Fraser with the exception of the Speyside.

John McClory and David Hood were hoping to take the battle to Graham and Wilson in another Evo IX on their return to the SRC, but unfortunately the pair left the road on SS2 and there was no going back from there.

The SRC Challengers has been one of the most exciting series’ this year, gifting drivers who haven’t finished in the overall top 10 of an MSA event in the past 10 years a chance to win some silverware. It has received great praise from the competitors and fans alike, with an incredibly close battle ensuing in 2016.

Scott McCombie and Mark Fisher took their third category win, giving their championship hopes a serious boost with 11th overall on the Grampian Stages in their Mitsubishi.

Finishing 27 seconds behind were the Impreza crew of Iain Wilson and Keith Riddick, with the pair taking their first Challengers podium after a strong performance in Aberdeenshire.

Ross MacDonald and stand in co-driver Mairi Riddick took a well-deserved third in their Evo VIII, with Ross taking his first overall top 10 in the Scottish Rally Championship in just his fifth SRC event with a four wheel drive car.

John Wink and John Forrest’s title hopes are all but over after a brake pipe issue saw their Evo IX fail to reach the finish at Crathes Castle. It was a shame after Dom Buckley Motorsport put in so many man hours to repair Wink’s Mitsubishi after his big crash on the Scottish rally.

However it was Inverurie’s Matthew Thomson and co-driver Ian Graham who took the spoils and look set for the Subaru Cup title after finishing first in the category and 25th overall, with Mutch and McDonald not competing on the Galloway Hills.

The pair benefited from the misfortune of Elgin’s Scott Mutch and Mosstodloch’s Greg McDonald, who lost power steering in the second loop of stages, causing some wild moments for Scott who had to look through Greg’s window through some of the corners he was that sideways.

The sixth and final round of the 2016 ARR Craib MSA Scottish Rally Championship is the Galloway Hills Rally based in Castle Douglas on 10 September.

As well as the fight to become the 2016 ARR Craib MSA Scottish Rally Champion, the Galloway Hills will draw the curtain on each of the class battles, with the drivers’ best five scores from six events deciding whether they become the champion of their class.