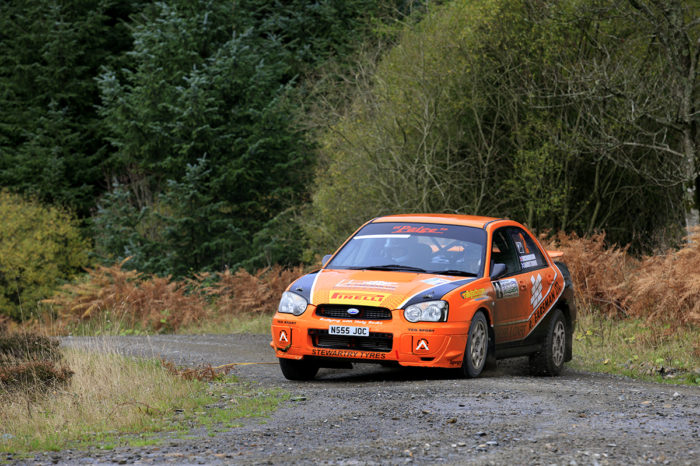 The 2016 ARR Craib MSA Scottish Rally Championship title battle is going right down to the wire on the sixth and final round of the series, the Armstrong Galloway Hills Rally.

The rally, based in Castle Douglas, takes in six special stages covering 44 competitive miles in the Dumfries & Galloway forests north west of the rally base, and is returning to the SRC having last being included in 2013.

A previous winner of the event, Mark McCulloch, outlines what the competitors will face on the Galloway Hills.

“The stages are usually very good and fairly gravely unlike the sandy stages further north. They flow well and generally have quite varied road widths which makes it tricky trying to judge your speed in places.”

This year the rally will see the 2016 Scottish Rally Champion be crowned, and it is the Duns pairing of Garry Pearson and Robbie Mitchell who are in the box seat to become the fourth different champions in as many years.

Competing in an ultra-competitive Ford Fiesta R5, Pearson has often been the class act of the field in 2016, taking two wins and four podiums from just five starts.

Pearson said: “It would be an excellent accolade to achieve! We want it very much.”

Speaking about his approach to the Castle Douglas event, he reiterated: “It’s another event for us in an R5 so we won’t be altering our pace or preparation from the other rallies.”

However, if Garry is to win his first Scottish title he will need to beat local man and event sponsor Jock Armstrong on home soil, who will be going all out to defend his Scottish crown with Paula Swinscoe.

The Subaru Impreza pilot hasn’t beaten his championship rival since the Border Counties rally in March, but knowing he has to win to have any chance of retaining his Scottish title, bet against him at your peril.

Still with a mathematical outside shot of the championship, Mark McCulloch and Michael Hendry head into the Galloway Hills in superb form following their fourth place on the previous round in Aberdeenshire.

The Mitsubishi Lancer Evolution IX driver is a local lad, and is vying to reach the podium once again before the season is out.

He said: “Having come from the Grampian and studied the points we are really happy with our championship to date.

“We started the season aiming to be top 5 and even with drop scores we have achieved that. We are going to the Galloway Hills in a potential battle for third overall in the championship and with no pressure so it is a perfect position to start the rally.

“Our main rivals for third are Mike Faulkner and Peter Foy and at the start of the year I would have said it wasn’t possible to beat them, but after the last two rounds I think we have an outside chance of taking the fight to them and that’s all we can try and do.

“A podium on the rally; that would be an added bonus!”

Mike Faulkner and Peter Foy have once again missed out on a Scottish Championship title in 2016 following an up and down year in their Evo IX Mitsubishi.

The Wigton driver has given his all resulting in podiums on the Speyside Stages and Scottish Rally, but two punctures wrecked any chance of a good result on the Grampian, leaving the pair fifth in the overall standings.

John MacCrone and stand in co-driver Stuart Loudon are the ones to watch in Castle Douglas after claiming a maiden SRC win on round 5 in their R5 Fiesta.

MacCrone took the win in style, demolishing his opposition in what became a final stage shoot-out, doing his confidence the world of good. The fact it was his first time on gravel since April’s Speyside Stages only made the feat more impressive.

MacCrone  can’t win the SRC title this year, but may well end up having a say in this year’s battle.

Ahead of the final round of the season, John said: “Jock and Garry will both be going balls to the wall chasing the championship so it’s going to be a lot of fun trying to get in amongst that, along with all the other chargers!

“My aim for this season was to enjoy my rallying after the accident last October and I’m doing that now so it’s all good.”

Bruce McCombie and Michael Coutts enjoyed a great battle with Mark McCulloch and Michael Hendry last time out, and are looking to renew that rivalry this weekend on the Galloway Hills.

The Banchory driver lost out to McCulloch on his home patch, so is determined to reverse the favour and defeat his rival on Mark’s home territory.

The season has been another solid one for the Mitsubishi driver, showing great flashes of speed and plenty of consistency to see him firmly within the top 5 of the championship.

Andrew Gallacher and Jane Nicol return to the SRC after missing the previous round in Banchory, and the pair will be looking to find the form they did earlier on in the season, with a strong top 10 finish undoubtedly being the target.

The Hurlford driver will  pilot a Ford Focus WRC as he bids to cement a top 10 place in the championship.

As well as the battle for overall honours, the title battle within the SRC Challengers, for drivers who hadn’t finished in the top 10 of an MSA event in the past 10 years, is going right down to the wire with several names in the mix to claim the inaugural trophy.

Alasdair Graham, Iain Wilson, Ross MacDonald and Scott McCombie are all in with a chance of taking the title, in what has been one of the most exciting championship battles in recent rallying memory.

With such small margins between the crews, the series has witnessed great battles up and down the country in 2016, with one final onslaught to decide the SRC Challengers victor set to take place this weekend in the forests around Castle Douglas.

Scott McCombie has taken three category wins this year on the Snowman, the Scottish and the Grampian, and therefore with drop scores to be considered is the favourite for the title, especially given his current rich vein of form with co-driver Mark Fisher.

However, Paisley driver Graham and his Alford co-driver Laura Stuart are at the top of the tree in their class 10 Mitsubishi, and will be determined to take both the Group N class spoils and the SRC Challengers.

Iain Wilson and Keith Riddick (Subaru Impreza) and Ross MacDonald and Matthew Johnstone (Mitsubishi Lancer Evo VIII) have both been models of consistency this year, and so sit well in the equation despite not taking a class win this year.

The other man who has won in the category besides McCombie and Graham is Huntly driver John Wink, who took the spoils on the Border Counties.

The Mitsubishi driver, co-driven by Martin Forrest, started his season off well but costly errors on the Speyside and Scottish followed by mechanical issues on round 5 mean Wink isn’t in contention for the Challengers title, but will be one to watch as he looks to bag a good result to round off his season.

The Armstrong Galloway Hills Rally will be contested on 10 September, and will see the crowning of the 2016 ARR Craib Scottish Rally Champion as well as all of the class champions.