Champions elect among the SRC classes 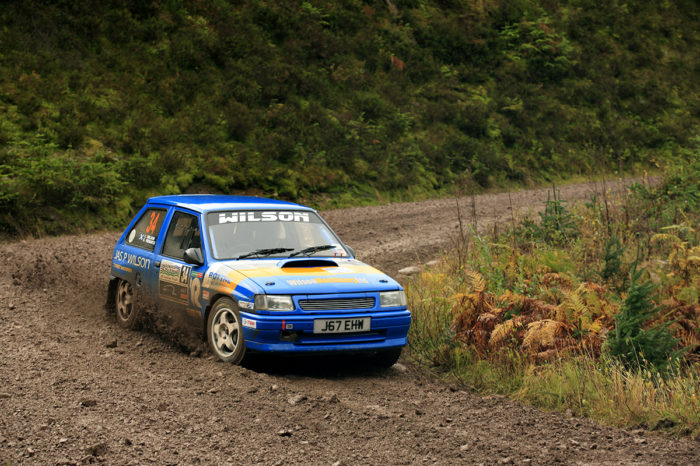 The 2016 ARR Craib MSA Scottish Rally Championship has been a thrilling season’s rallying as has become accustomed with the SRC, but it is all to be decided on the final round of the series, the Armstrong Galloway Hills Rally.

The rally comprises of 42 competitive stage miles in the forests around Castle Douglas, and will be the setting for many championship deciders amongst the various classes within the Scottish Rally Championship.

The class 2 championship for 2WD cars up to 1450cc could not be closer heading into the final round.

MacRae took the spoils last time out on the Grampian Stages however, where Lawrie and co-driver Paul Gribben (Annan) failed to finish, so MacRae and co-driver Martin Bruce (Portree) will be looking to cause an upset on Lawrie’s home turf.

The pair’s main competition within the class will come from another yellow Corsa, driven by Ross Carbry (Carluke) and Steven Brown (Onich).

Donald Peacock and Scott Peacock (Bridge of Dee) head their rivals Robbie Beattie (Dundee) and David Findlay (Blairgowrie) by a slender margin as the championship heads to the south-west.

Both drivers have two class wins apiece this year with the other going to Scott Beattie, but Robbie Beattie may need Donald Peacock to run into trouble in his similar 205 GTI if he is to take the overall class 3 honours in 2016.

Thomas Gray (Tore) and Dave Robson (Jedburgh) top class 4 (for 2WD cars with 1450-1650cc, more than 8 valves) in their Ford Fiesta R2 thanks to victories on the Speyside and Grampian Stages.

Gray, last year’s Junior Champion, has been impressive with the experienced Robson alongside, and now only needs to finish in the points to secure his second title in as many years.

The main opposition comes from James Robertson (Penpont) and Colin Maxwell (Dumfries)’s Citroen C2. The pair took the class win on the RSAC Scottish Rally and can equal Gray on points in the championship if he fails to finish and they win the rally.

Belford driver David Martin, third in the championship, will also be out, as will yet another C2 driven by Murray Coulthard (Twynholm) with Scott Beattie’s Talbot Sunbeam and Alec Curran’s Vauxhall Corsa joining the mix with Elgin’s Susan Shanks on the notes.

McIlwraith didn’t start the opening round in Inverness, but since has charged to three class wins in the Scottish Borders, Moray and Aberdeenshire, while Chalmers took his one and only class victory in Dumfries & Galloway.

It is effectively a direct shoot-out between the pair, making these fast charging Escorts even more exciting to watch.

Brechin co-driver Alex Ian Milne has an unassailable lead in class 6 for historic specification vehicles, meaning he has already swept up the class championship.

However, on the Galloway Hills he will face incredibly close competition in his Escort, with potato former and Escort legend Steve Bannister making his first appearance since the Border Counties in March. Lauder’s Callum Atkinson will co-drive.

A whole host of Ford Escort Mk2’s, Mk1’s and RS1800’s join the battle on the stages although aren’t registered for championship points.

Class 7 (for FWD cars 1651-2050cc, more than 8 valves) has been an intriguing battle so far in 2016, with Caroline Carslaw’s Ford Fiesta sitting at the top of the championship table.

After missing the previous round in Aberdeenshire, the defending SRC Ladies Champion is back to try and claim the class crown, with the services of Tobermory co-driver Ross Williams in her Ford Fiesta ST.

Kevin Gray (Invergordon) and Daniel Christie (Insch) sit just 10 points behind in their Vauxhall Astra, and like Carslaw have taken two class wins this year.

However if they are to take the championship they will need to win the event and hope Carslaw runs into trouble.

The battle within class 8 (for RWD cars, 1651-2050cc, 8 valves or more) is always an entertaining one, and for the Galloway Hills it has been spruced up by the entry of Banchory driver Quintin Milne and co-driver Sean Donnelly from Elgin.

Milne will be a formidable force for the class win with his driving style similar to that of 1988 Scottish Rally Champion and 1995 World Champion Colin McRae.

However, the championship battle is between the Escorts of Grant Inglis (Glasgow) and Duncan MacDonald (Portree) and the BMW 318i Compact of Keith Seager (Hamilton).

Seager heads the championship due to his great level of consistency, but considering the dropped scores it is Inglis and co-driver Robert Gray who hold a slender margin over the impressive Duncan MacDonald and Neil Ross (Portree).

Winners on the Grampian Dougal Brown and Lewis Rochford will not be competing this weekend.

Class 9 (for all 2WD cars above 2050cc) has already seen a winner in Donald and Rachel Brooker with their BMW 130i. Subsequently the pair have decided not to contest the Castle Douglas finale, but class 9 should still produce a battle.

Form men Gordon Murray (Perth) and David O’Brien (Duns) will be out once again in their Mk2 Escort seeking a third win on the bounce, but will face stiff competition from the non-registered crew Derek Crossen and Mark Faulkener in another Ford Escort.

The battle within class 10 (for Group N vehicles) was expected to be a battle between John Morrison and Fraser Wilson this season, but Alasdair Graham (Paisley) and Laura Stuart (Alford) have been the stars of the show in 2016.

Grabbing class wins on the Border Counties, the Scottish and the Grampian has seen them lead the championship for most of the year, with a solid result this weekend being enough for him to take the title in just his first year with the Evo IX.

Fraser Wilson (Port William) and Craig Wallace (Kirriemuir) will be determined not to lose out in their Evo in what has been a largely frustrating season for the pair, with their highlight being the class win on the Speyside.

The duo have won the class on the past four events in their Mitsubishi Lancer Evolution IX, with Dale Robertson (Duns) winning the opening round.

Iain Wilson (Dalbeattie) and John Wink (Huntly) complete the championship top three, with Faulkner ultimately now too far ahead for the chasing pack to catch.

Class 12 (for Group A 4WD cars, S2000 cars, R4’s and all other 4WD cars not in class 13 with a sequential gearbox) is a tight affair between Castle Douglas’ Jock Armstrong (Subaru Impreza), Dumfries’ Mark McCulloch and Banchory’s Burce McCombie (Mitsubishi Lancer Evolution IX’s).

The Subaru man has won the class on rounds 2, 3, 4 and 5 making him the firm favourite for the championship, but McCulloch and McCombie are firmly in the hunt with Barry Groundwater not far behind, although Barry is not contesting the Galloway Hills.

Class 13 (for WRC and R5 cars) has been won by Duns duo Garry Pearson and Robbie Mitchell in their Ford Fiesta R5, with the pair taking maximum points on all but the last round in Banchory.

The Ladies Championship is set up to be a two way fight between Linzi Henderson (Subaru Impreza) and Caroline Carslaw (Ford Fiesta ST), with Gina Walker (Citroen C2) rounding out the top 3 in the championship in her first season in the Scottish championship.

Henderson holds a seven point advantage over Carslaw so it is all still very much to play for.

Grant MacRae’s Peugeot 205 tops the Juniors ahead of Gina Walker and Andy Struthers. MacRae’s 13 point gap at the summit of the series is enough to confirm him as the new Scottish Junior Champion.

Other confirmed champions are Donald Peacock who has a huge lead at the top of the 205 Cup, and Inverurie driver Matthew Thomson who will take the www.usedcarparts.co.uk Subaru Cup due to the absence of class rivals Scott Mutch and Greg McDonald.

The Scottish 2WD Championship however is far from decided, with Duncan MacDonald, Dougal Brown and Grant Inglis all being separated by just a smattering of points.

Behind the Escorts are a host of other hopefuls including Thomas Gray, Angus Lawrie and Grant MacRae, making this championship battle far from over.

All the action will be on Saturday 10 September in the forests around Castle Douglas, making the Armstrong Galloway Hills Rally certainly not one to miss.