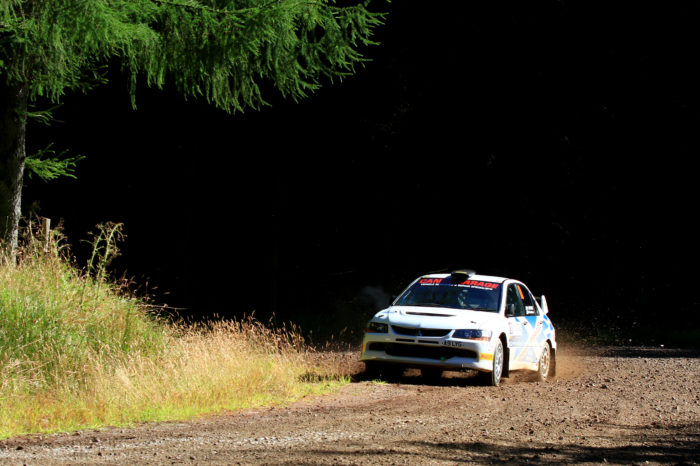 The 2016 ARR Craib MSA Scottish Rally Championship has been a thrilling season by all accounts, but it isn’t just the battle for overall honours that is keeping the fans enthralled.

The new-for-2016 SRC Challengers Cup, for drivers who hadn’t finished in the top 10 of an MSA event since 2006, has been a revelation for the competitors and spectators alike.

The battles within the category have been some of the best we have seen all year, particularly the battle last time out on the Grampian Stages which saw Scott McCombie and Mark Fisher take their third category win ahead of Iain Wilson and Ross MacDonald.

Heading into the sixth and final round, the Armstrong Galloway Hills Rally in Castle Douglas, the championship is all to play for with the drivers’ best five of six scores counting to the overall tally.

Four drivers are still in contention for the inaugural trophy, ensuring the Galloway Hills should be a classic.

Paisley’s Alasdair Graham and Alford’s Laura Stuart sit at the top of the tree in their class 10 Mitsubishi, but with drop scores applied they sit a mere six points back from frequent pace setters Scott McCombie and Mark Fisher.

Graham has grabbed one class win this year on the McDonald & Munro Speyside Stages in April, and has claimed a further two podium finishes on the Border Counties and Scottish Rally, before a disappointing result after an off road excursion hampered his challenge somewhat on the Grampian.

However, he is up for the challenge and knows the opposition will be too.

“We are going to push all the way and hope it pays off.” He said.

“Everyone else around us will be doing the same thing so I know it’ll be very close. If we managed to win the Challengers it would be the biggest victory in all the years we have been competing.

“Laura and I owe a lot to our friends and family that have supported us and if we won the Challengers it would really be for them as much as us. It’s been a fantastic competition and we have loved it.”

The men to beat heading to the Galloway Hills are Banchory driver Scott McCombie and his Workington co-driver Mark Fisher.

The pair, campaigning a Mitsubishi Evo IX, have taken three class wins this year including a two in a row on the Scottish and recent Grampian Stages, meaning their competitors have their work cut out to defeat them on the Galloway Hills and potentially the SRC Challengers trophy.

“It’s only my second full season of rallying so I would be absolutely over the moon to walk away with the Challengers title.” Scott said.

“However we are a long way from that and I am well aware that anything can happen. There are so many contributing factors that must go our way.”

The only real blip in McCombie’s season came on the Speyside Stages, where broken suspension led to their first and only non-score of the season.

“Due to our bad luck on the Speyside we must get a finish this weekend,” he said, “however we can not afford to sit back and take it easy so we will attack this rally in the same manner we do every rally by trying to finish in the best position possible.”

Chasing a maiden Challengers win after coming so close last month is Dalbeattie driver Iain Wilson, with Haugh of Urr’s Keith Riddick guiding him through the forests.

The Subaru driver has been one of the most consistent performers not just in the Challengers but overall in 2016, having never finished lower than sixth in the category and completing 100% of the competitive mileage.

However, if Dalbeattie’s finest wants to take the first ever SRC Challengers title, he will need to get the better of McCombie and perhaps hope the Banchory driver suffers some issues.

Iain said: “We have been consistent this year, that’s true, but we also feel we have under achieved on a few events so the plan is all out attack this weekend. We made a few breakthroughs at the Grampian with the general set up of the car so although it feels a bit strange to drive at times we’re hoping to carry that extra speed into the final round.

“We know we’ll have to be on top of our game to finish ahead of the other lads that are in the mix, the trouble is they will all be doing the same! A good close battle that we manage to come out on top of would do just fine.

“This looks like it will be our last year in 4WD so it’s now or never! The banter between the competitors has been flying around the last few weeks and that’s also been fun.”

Rounding out the championship quartet is Conon Bridge driver Ross MacDonald, with Aberdeen co-driver Matthew Johnstone returning to the co-drivers’ seat of the Lancer Evolution VIII after missing the last round.

Ross has had a solid season so far, but acknowledges he will need to go all out if he is to take the inaugural Challengers trophy.

“Consistency has been the key for us this year but I will certainly be trying to go for broke this weekend and see what happens.” He said.

“We need a bit of luck in regards to other people’s results but we will try to do our bit and see what happens.

“It’s great to be heading into the last round with a chance of winning something, especially in just our first year with the Evo. I don’t think we expected to be competing where we are so soon so we are delighted with the progress we have made this season.”

The championship hopefuls won’t have it all their own way however on the Galloway Hills, with plenty of other drivers including John Wink looking to round out their seasons with a strong result.

The Huntly driver, co-driven by Inverurie’s John Forrest, looked to be McCombie’s main championship rival in the early stages of the season following a second on the Snowman and win on the Border Counties, but things have taken a turn for the worse since with the Evo IX crew only scoring 25 from a possible 75 points in the following three rallies.

Two off road moments on the Speyside and the Scottish saw him lose positions and retire altogether, before brake failure put paid to his chances on the Grampian.

Wink said: “Unfortunately the championship is out of our reach after the brake failure on the Grampian, but the aim for us this weekend is simply to try and set a base for next season.

“There’s no pressure on us, so we’ll go out and try our best to get a decent result. A category win would be brilliant but we’re up against some really experienced drivers and some really good cars as well.”

Wink and Forrest will be running a special livery this weekend, with the Mitsubishi being covered in organ donation logos in support or organ donation week.

Other drivers to watch are Brian Watson who enjoyed a season best result on the Grampian, James Gibb in the AG Fiesta and Keith Morris in his Mitsubishi.

John Wink and Iain Wilson summed up what competing in the SRC Challengers this year has been like.

John said: “The Challengers championship has been brilliant. It has given competitors like us a chance to battle against people at the same level, and something to really drive for! It has been a fantastic addition to the SRC classes.”

The sixth and final round of the 2016 ARR Craib MSA Scottish Rally Championship, the Armstrong Galloway Hills Rally, will be contested on Saturday 10 September in the forests around Castle Douglas.