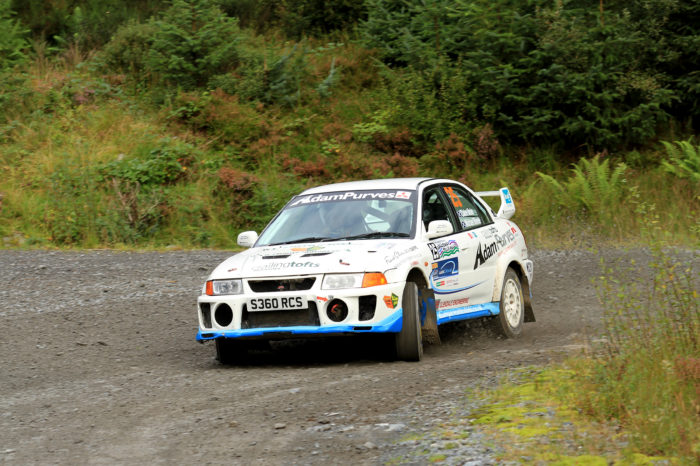 Cornhill farmer Michael Binnie has been one of the biggest improvers of the 2016 ARR Craib MSA Scottish Rally Championship, with 2016 being the Mitsubishi Lancer Evolution V driver’s first season of rallying.

Getting involved in the sport was something Binnie was always interested in, and it stems from his dad.

“I am lucky enough to have a motorsport mad family so all my life I have been indulged in it, predominantly in circuit racing due to my fathers’ past.” He said.

“Rallying always caught my eye, even when I couldn’t legally drive a road car I would pester my dad for a rally car! I have always wanted to rally, it has just been a case of getting college out of the way, then working my socks off to get a budget together.”

Michael caught everyone’s attention on the final round of the SRC, the Armstrong Galloway Hills rally last month, where he steered his older Mitsubishi to tenth overall, seventh SRC and the leading Challenger home alongside Duns co-driver Claire, all this in just his sixth rally.

Binnie recalled: “It felt great! At the start of the season I would never have expected a top ten finish. We set some good times on the Scottish which showed the pace was there so it was nice to back that up at the end of the season after two disappointing DNF’s. To take the Challengers win was the icing on the cake.

“There was no secret to it, but if there was I wouldn’t tell you! I just tried to keep the car as straight as possible, I learnt that from my karting days.”

Binnie finished the 2016 season 24th overall on 36 points, with two top 30 results on the Border Counties (where he kicked off his season) and the Speyside Stages before DNF’s on the Scottish Rally and the Grampian Stages.

But Michael is happy with his first Scottish Rally Championship season.

“The season has been predominantly positive. We suffered DNF’s at the Scottish and also the Grampian because of mechanical failures bur aside from that we have taken some solid results for my first season.”

Partnering Michael Binnie this year was experienced navigator Claire Mole, who has competed alongside the likes of Gwyndaf Evans in her career. Working with her is something Michael acknowledges has helped him progress well in 2016.

He said: “It has been a pleasure to work with Claire this year, we clicked from the start. I am very lucky to have such an experienced co-driver sitting next to me, she has helped me improve massively throughout the season.

“The Speyside was our first rally together and it was a real eye opener for me as I didn’t appreciate just how much work co-drivers put in building up to the event. We drivers definitely have the easy job!”

After a good debut season, the plan for next year is just to build on the platform he has built for himself this year.

“We are currently planning on doing the full SRC season in 2017 with the same machinery as this season. Claire will also be sitting alongside me for the full season so we can hopefully take off from where we left.

“Having said that, I’m sure the Snowman could throw a few curve-balls so it might be a case of getting through that one.

“I would like to thank my sponsors for supporting me throughout the season, and also my service crew for the hard work they put in on the car and for giving up their weekends to come rallying. Finally thank you to the organisers and marshals who ran each event smoothly, you are a very dedicated bunch!”