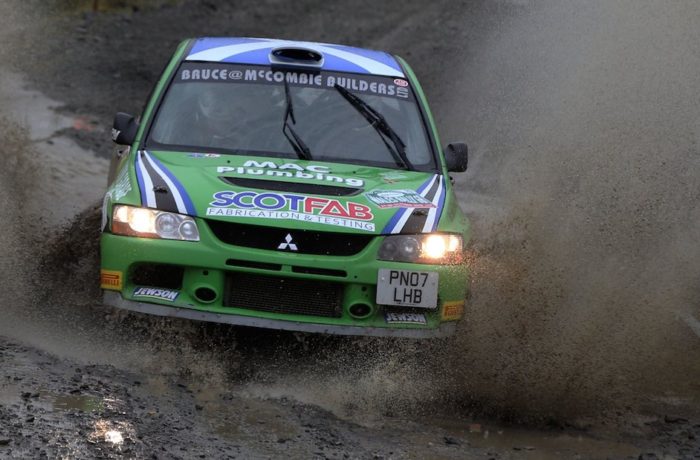 Bruce McCombie and Michael Coutts continued where they left off on day 2 of the Dayinsure Wales Rally GB National, eeking their lead over rivals Luke Francis and John Roberts to 32.7 seconds.

The weather this weekend was predicted to be humid and dusty, but yesterday’s action proved otherwise. Today however conditions were slightly better, but the stages were very rough in places after the international field had been through.

It was a good day for the Scottish crews with four Scots in the top eight after the day’s four tests.

The day started with the short, spectator friendly Cholmondeley Castle stage before heading down to classic forest tests such as Pantperthog, Dyfi and Aberhirnant.

McCombie steered his Evo IX through the infamous roads at a high pace, winning two of the day’s four special stages to extend his lead by 5 seconds over the course of the day.

However, the over-heating issue that affected his car yesterday was still plaguing the Banchory driver. Luckily, it only really affected him in the 13 miles of Dyfi, which bodes well for tomorrow with the longest stage just 6 miles long.

McCombie said: “We’ll just have to do what we can do, no point in pushing it too hard. We might just not run the anti-lag system.

“The stages were rough, that last stage was harum-scarum for a minute, but we can’t complain. It’s not bad for me!”

Iain Wilson also had a very good day at the wheel of his Subaru Impreza, climbing up to fourth overall at the close of play.

He has 11 seconds in hand over Wug Utting in another Impreza, with the gap ahead a little too much to make up on pace alone over the 16 stage miles tomorrow.

Wilson said: “It’s been a long day, no dramas but the front three are stretching away a bit. We’ll need some problems for them to catch up.

“The stages were all quite good, they all had their rough bits but not as bad as I thought, I was worried about it last night. There was a smear of rain now and again but nothing bad.

“We’ll need to keep those boys chasing us behind tomorrow.”

Scott McCombie and Mark Fisher brought their Mitsubishi Lancer Evolution IX back to Deeside in sixth overall after a strong day at the office.

The Banchory man overhauled Rudi Lancaster in the morning to sit effectively in no-man’s land on the leaderboard, with slim hopes of reeling in fifth but no real pressure coming from behind.

At the end of Saturday, Scott said: “The castle stage was tricky, very slippery particularly as it was greasy. We were a bit lary in there.

“Today was definitely better, the car felt like we are used to but the gear shift light is reading wrong, you don’t know what you’re getting with that!”

Fraser MacNicol remained in eighth overall after a solid day behind the wheel of his Mitsubishi Lancer Evolution VI. He has a chance of overhauling Rudi Lancaster’s Escort tomorrow as he is just 12 seconds behind, but credited his rival saying he doesn’t want to pass him as Rudi deserves it going that quickly in that car.

Fraser said: “It was a good day today, we enjoyed the stages. There were rough bits but that’s to be expected with WRC cars going through.

“I’m really impressed with the pace of the guys at the front as we were pushing but aren’t really gaining. The car is up for it, the co-driver is up for it, it’s just me who is struggling!”

Matthew Jackson in Mark McCulloch’s Subaru and Robert Thomson in an Evo IX both made good progress today, ending the leg 11th and 13th respectively.

Carl and Rob Tuer sit two places back in 15th and top of their class in their 1600cc MG ZR. However, that battle is going to be a tough one with the R2 Fiesta of Gee Atherton less than 10 seconds behind.

Simon Hay is back up to 28th overall after his driveshaft woes yesterday, and was proving what could have been with some strong stage times.

“Tomorrow is just about getting more time in the car, we aren’t pushing to get anything.”

Tom Coughtrie kept it together in his Escort Mk2 to hold 33rd overall, while Ian Forgan and Kevin Robertson began the recovery from difficult days yesterday in 44th and 48th overall.

Geoff Goudie sits 51st overall overnight, but that could have been so much higher had he not broken the front left suspension on his GC8 specification Subaru Impreza in Dyfi.

“We just hit a hole, he said, “and it went bang, we thought it was a puncture so we just kept going. It was going well, the pace was picking up.”

Lee Hastings lies 58th overnight after a disaster of a day yesterday, but thankfully his Saturday went a lot smoother.

“We can lift our head up high tonight, we’ve had a good day. We set some good stage times today, I’m just getting used to Chris [Robertson] as well as it’s our first time together. Everything was coming together come the end.

“Tomorrow we want to see if we can some more good times, as long as we can bring it home.”

The final day of the Wales Rally GB National takes in three stages covering 16 competitive miles and a smaller liaison distance, with the ceremonial finish taking place in Llandundo at 15:19.