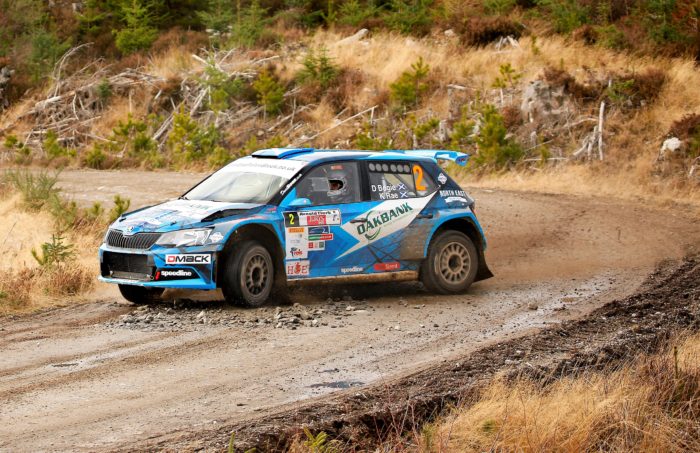 Bogie, with co-driver Kevin Rae alongside dominated each of the event’s five stages in his Skoda Fabia R5 to win the Inverness based rally by a comfortable 58 seconds. Despite being pushed in the early stages by Subaru WRC pilot Shaun Sinclair the Dumfries driver stamped his authority on the event from the outset.

Over 100 crews headed to the Highlands for the season opener and the strong entry list included a total of four previous Scottish Rally Champions. With interest in the SRC at an all-time high, the series was bolstered by much of the top 30 competitors in the event registered to score points for the championship.

Conditions in the region were unseasonably mild and the usually snowy and icy conditions were replaced with sunshine and high temperatures. However, the demanding Cairngorm forest tests still did their best to catch out the unwary with changeable grip levels.

The lack of snow would also mean Bogie would have to wait until stage two before opening out a lead on his nearest rival Sinclair. The Meall Mor test had its “Bogey” beaten by Bogie, Sinclair and regaining SRC champion Jock Armstrong, meaning each driver was awarded an equal time for averaging over the 70mph limit.

It was in the 13 miles of SS3 Strath Rory where Bogie really made his mark, going fastest by an incredible 28 seconds. That advantage would be an important one after the Dumfries driver had a spin in the penultimate test, meaning Fiesta R5 driver and SRC returnee Euan Thorburn would tie on times.

But Bogie’s lead would never be in doubt and he crossed the finish ramp in Inverness almost a minute clear of his closest competition.

“The plan was to come here and get some more time in the car so it’s been a great rally for us” said Bogie. “The pace has been good, the stages have been good and it makes such a difference when there’s no snow and ice, they really do change in character. The stages up here are as good as any you’ll get in the UK and to start the season with a win is hopefully a sign of things to come.”

Sinclair and co-driver Jamie Edwards finished an impressive second overall in their Subaru Impreza S14 WRC. Despite being one of the drivers to beat the bogey time in SS1, he ultimately couldn’t live with Bogie’s searing pace and was guilty of “pushing too hard” in the morning loop. At the finish, Sinclair said: “We held on, did all the donkey work earlier on in the day and then it was just all about hanging on to the position for the remaining stages.”

Thorburn with local Paul Beaton alongside, grabbed third overall at the finish in their Ford Fiesta R5. The Duns driver took time to bed himself into the new car but can be happy with an equal fastest time on SS4. 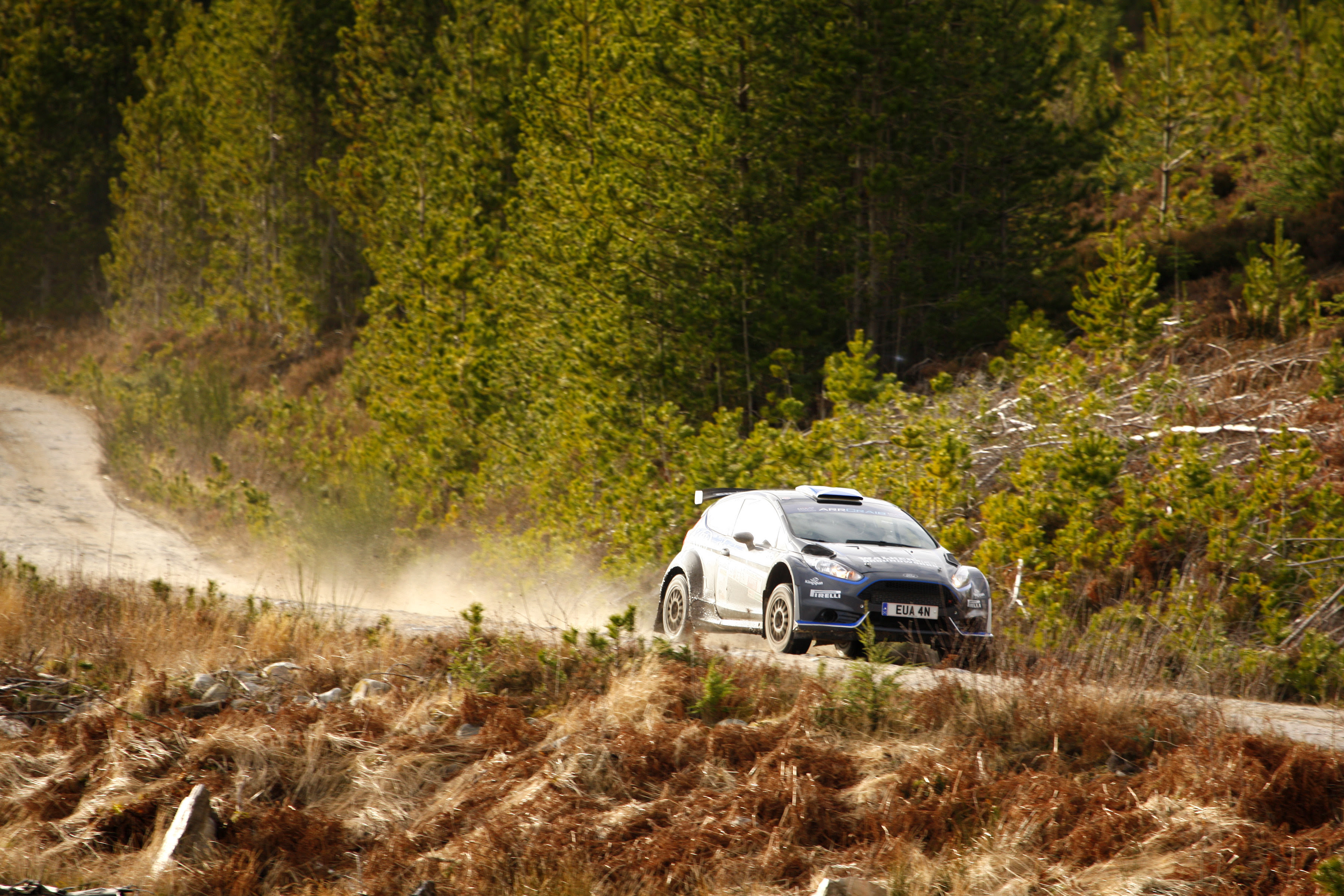 The 2014 Scottish Champion was pleased to get to the end of the rally and get more valuable time behind the wheel of his Fiesta. “Our plan today was to build it up slowly and see where we got to at the end of the day, so we’re happy enough to get some miles in the car” said Thorburn.

Defending Scottish Champion Jock Armstrong was robbed of third place in the very last stage by a charging Thorburn.  The Subaru Impreza pilot co-driven by Paula Swinscoe, got off to a rapid start but as the day wore on, couldn’t quite live with the pace of the R5 and WRC cars ahead of them and took fourth.

Rory Young and Allan Cathers took a remarkable fifth position in the very same Fiesta R5 Garry Pearson took to second place in the 2016 Scottish Rally Championship. The Dumfries driver insisted his plan was to “just have fun” and he certainly did that, coming out of each one of the stages with a smile on his face.

Sixth overall went to Bruce McCombie and Michael Coutts in their Mitsubishi Lancer Evo IX who were out for the first time since their Wales Rally GB National success.

Steven Clark and Paul Brown had a good day at the office, taking their older Mitsubishi Lancer Evo V to seventh place, just losing out on sixth to McCombie and Coutts in the final 10 miles.

Mark McCulloch and Mike Faulkner were both acclimatising to upgraded Mitsubishi Lancers on the Snowman, with the former getting the better of the Faulkner by just 6 seconds.

Last year’s winners Donnie MacDonald and Andrew Falconer rounded out the top 10 in their Ford Fiesta R5. It was a decent R5 debut for MacDonald, but a moment early on in SS3 drained his confidence and meant he lost touch with the leading runners.

The SRC Challengers category picked up where it left off in 2016 with a good battle for the honours on the Snowman.

Scottish two wheel drive honours went to local crew Dougal Brown and Lewis Rochford in their Mk2 Escort ahead of Peugeot 208 R2 driver Marty Gallagher. The Irishman crossed the water to get more experience on gravel and was rewarded by taking the SRC Juniors win by just one second in the process.

Thomas Gray became the first recipient of the SRC John Horton Star Driver Award for his performance on the opening round.

The Muir of Ord driver was awarded the accolade courtesy of the grit and determination he showed to finish just one second behind Gallagher after a crash on last year’s Mull Rally that split his Fiesta R2’s engine block in half. Gray will now carry a Star Driver banner on his car for the rest of the season, and will join six other drivers in an end of year shoot-out to win an overseas rally package at the end of 2017.

Gray said: “I’d be lying if I said we weren’t trying all day, it was a good battle. We’re surprised [to win this award] but are happy.”

The ARR Craib MSA Scottish Rally Championship takes in over 300 stage miles across seven different events in Scotland and will head to the Brick & Steel Border Counties Rally in Jedburgh on March 18. 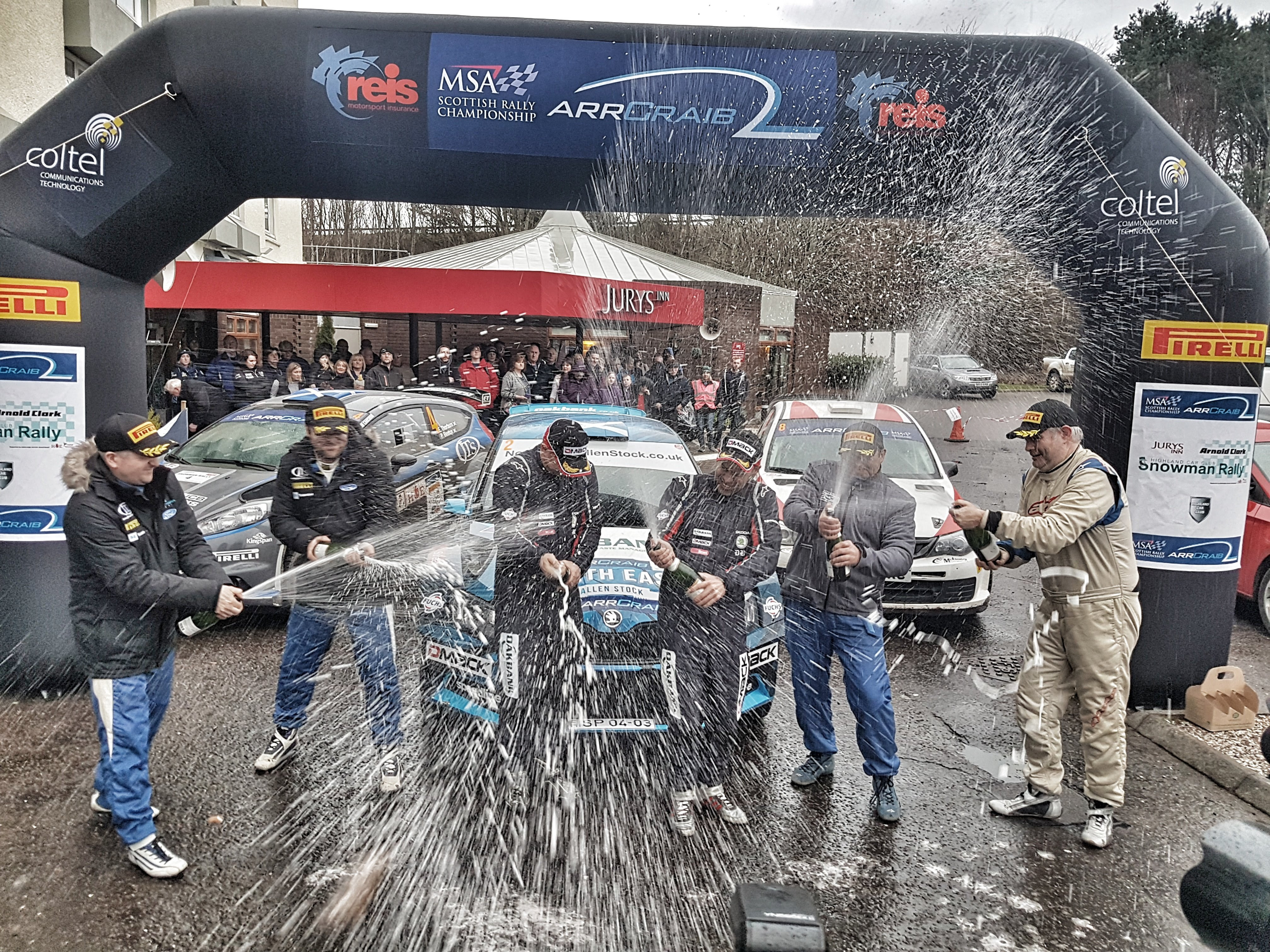