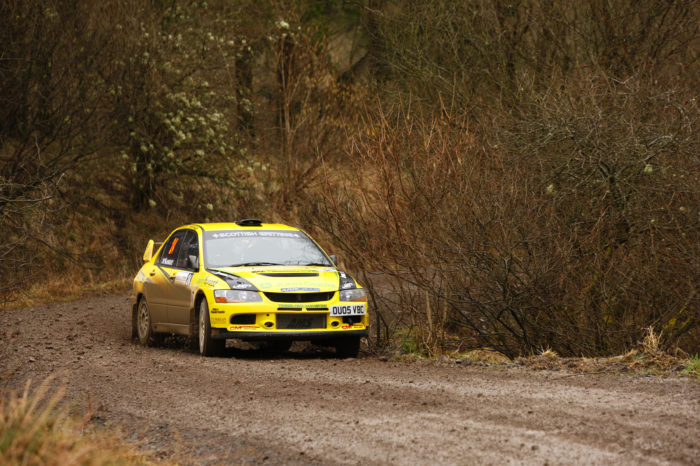 Greg McKnight and Laura Marshall certainly made an impression upon the ARR Craib MSA Scottish Rally Championship (SRC) on round two of the 2017 series, the Brick & Steel Border Counties Rally.

The Mitsubishi Evo IX crew were running as high as second overall in the Tweed Valley, just behind eventual winner and defending champion Jock Armstrong, before brake issues and then a double puncture wrecked their podium hopes. The duo limped home to claim sixth place.

Despite the obvious disappointment, McKnight was ‘very happy’ to have proved his pace in what is still a new car to him.

“I was able to take many positives away from the Border Counties rally,” he said. “I was very happy with my pace. I had a lot of confidence which has taken me time to find since switching to four wheel drive.

“My pace at the start of the rally was a bit of a surprise but I was glad to see the pace was consistent throughout the day until our problems struck. My confidence was growing with every stage and for the first time everything felt like it had clicked into place,” McKnight continued.

“It has altered my goals slightly for the rest of the season. Now that I have been in that position I would like to continue my momentum. It has made me even more ambitious!”

Frustratingly for Greg, the car developed the same brake issue that brought his Snowman Rally to an end, just two stages from home. He acknowledges the part co-driver Laura Marshall played in helping salvage valuable points from the weekend.

McKnight explained: “It was a fast downhill section when I felt the brake pedal go straight to the floor. I instantly had to back off and knew we were going to lose a lot of time. We are going to make some alterations to try and prevent these brake problems happening again, we have learnt our lesson!

“Words can’t explain how I felt knowing that second overall had gone, it would have been such an achievement for us. Laura did a good job getting us to the end and continued to read the notes as normal despite knowing we had no brakes at all!”

The Penpont pilot’s sheer pace and spirited performance saw him claim the SRC John Horton Star Driver Award for the event, which sees the nominated driver go through to an end-of-season shoot-out for a paid entry to compete in a top European event.

McKnight is delighted to have his pace recognised with such a prestigious award.

“After a slightly disappointing end to the rally, I was overwhelmed to receive the John Horton Star Driver Award,” he enthused. “Despite the end result, it was nice to know that my pace had been noted. I think this is a fantastic award and it would be such an experience to compete in a European event. I am appreciative to be a part of it.”

Greg McKnight and Laura Marshall will join the rest of the SRC contingent in Elgin for round three of the 2017 championship, the McDonald & Munro Speyside Stages on Saturday 22nd April. The Moray event is unique in that it features two runs through the Cooper Park spectator stage on tarmac.