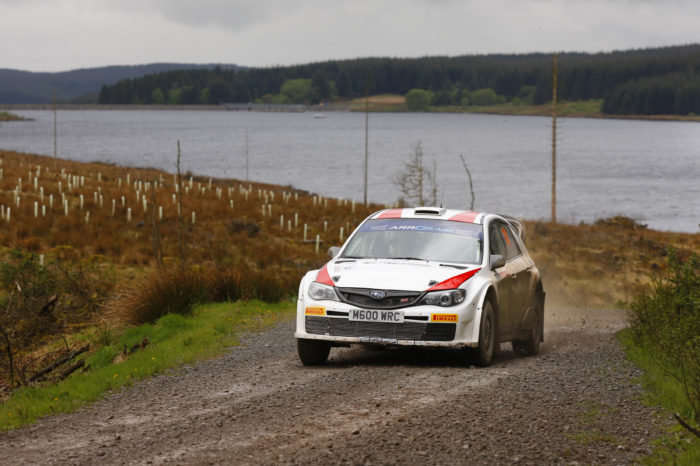 “The championship is the goal,” Sinclair explained.

“Unfortunately it’s looking as if the only way we can realistically take the title is by either Euan [Thorburn] or Jock [Armstrong] having a problem.

“I’m very frustrated that we haven’t managed to win a round yet, but I’d probably put that down to our lack of testing. I don’t sit in the car until the day of the rally so it takes us up until the first or second stage to get up to speed and then it’s almost too late. We’ve only had one test this year and that was before the Border Counties. I think even the pace notes become alien to you if you don’t get out frequently.”

Sinclair and co-driver Jamie Edwards got their season off to a near perfect start, taking second on the Snowman Rally behind five time Scottish Champions David Bogie and Kevin Rae in their Skoda Fabia R5.

“I wasn’t surprised by our strong start on the Snowman, it was the first time I actually drove stages that I remembered which certainly helps,” Sinclair recalled. “A lot of this championship is down to memory given the experience my competitors have compared to me, and the car is awesome so that obviously helps!”

Since the season-opener in Inverness, his season fluctuated a little. A costly off road excursion on the Border Counties saw the Oban driver claim just three points, but he bounced back to claim fourth on the Speyside Stages before returning to the podium on both the Scottish and Argyll Rallies. But having run so highly in difficult conditions, the overwhelming feeling was of disappointment on stages he was victorious on in 2010.

“Because of the active diffs on our car, the slippery stuff doesn’t play to our strengths so in a lot of cases we were very much a passenger on the Argyll,” Sinclair said. “I was slightly disappointed with the final stage as I felt I had a really good stage but Euan [Thorburn] ended up taking a lot of time out of us. I wasn’t too surprised though as if somebody can drive those R5’s fast they are very, very hard to beat.

“I think the Grampian should suit me, it’s my kind of style; quite open and fast. I need to win the event and if I don’t the championship is more than likely going to over. I’m not hoping for anybody to have a bad weekend but there is potential for it. We’ll certainly give it a go.”

Guiding Sinclair through the Scottish forests and undergoing his debut season in the SRC is Jamie Edwards. The relationship between the Welshman and Sinclair has been very strong across the first five rounds of the year.

“Jamie is a very easy-going guy so it’s going really well,” Sinclair expanded. “I am probably fairly unpredictable when it comes to what I’m going to do or say next so he is definitely the peaceful one, managing to pick me up and keep me right when I get a bit erratic. I definitely listen and try to impress him, I have so much respect for what he does.”