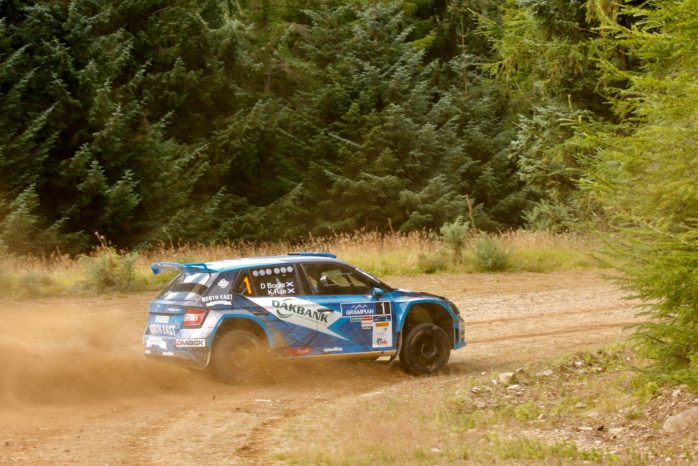 Whilst David Bogie and Kevin Rae took a commanding victory in Aberdeenshire, all eyes were on Euan Thorburn and Paul Beaton whose second place was enough to nett them their second  ARR Craib MSA Scottish Rally Championship title at the Grampian Forest Rally this weekend.

The Skoda Fabia R5 crew won the event by 58 seconds from Thorburn and Beaton’s Fiesta R5, with Jock Armstrong and Paula Swinscoe completing the SRC podium.

A strong entry of over 80 cars descended on the small Aberdeenshire village of Milton of Crathes with one of the strongest top 20’s of any rally in the UK. Undeterred by all the championship talk behind him. Bogie was in fighting mood after a disastrous Ypres Rally which all but ruined his British Rally Championship season. The Dumfries driver took his frustration out on the stages, to draw first blood and open up a 14 second lead heading to first service.

Behind him it was predictably tight. Championship protagonists Thorburn and Armstrong held second and third, with Shaun Sinclair snapping at their heels in his Impreza S14 WRC. Mike Faulkner, Mark McCulloch and Bruce McCombie were enjoying a ding-dong battle in their Mitsubishi Evo IX’s while Fred Milne was impressing on his debut in the Impreza S12B WRC.

The 13 miles of Drumtochty North would prove crucial in the battle for overall honours and the SRC title. Bogie took the stage by 12 seconds, but importantly Thorburn edged Armstrong’s Subaru by 15 seconds to consolidate the second place he needed. Backing this up with another strong time on SS4, the Fiesta R5 pilot backed off in the final loop, sticking to the middle of the road in order to bag the all-important points.

His Skoda Fabia R5 rival however did no such thing, continuing to exert his dominance by winning all six of the rally’s stages. Bogie started the Grampian without a shot of a record sixth title, but has won more than any other driver this year with three victories to his name. 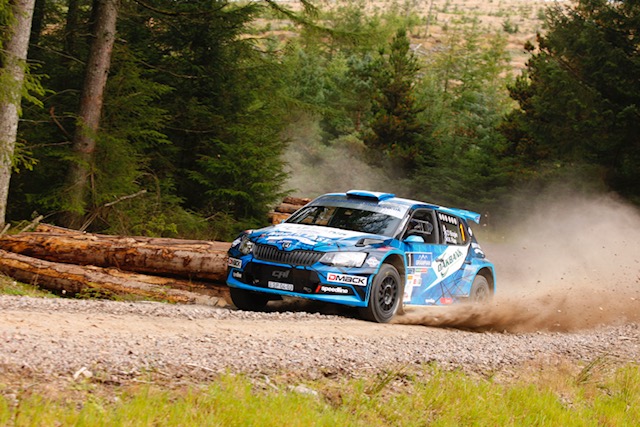 “It was a brilliant day,” Bogie admitted. “These stages up here are some of the best in Scotland; they have such a great nature and were in a really good conditions so I enjoyed myself out there. I love the British Championship but it’s always nice to be back in Scotland where I have lots of family and friends and know a lot of the marshals. All in all it’s been a great day out!”

The biggest smile however belonged to Thorburn who reached the finish at Crathes Castle as a two-time Scottish Rally Champion.

“This feels pretty good, we’re double champions now,” he enthused. “The first one was special, we worked very hard for it but this one is just as nice so I’m delighted.

“Jock is a season regular in the Scottish Championship who know the stages just as well as anybody so we knew we’d be up against it this year but obviously delighted to have taken the championship. The pace in the SRC is right up there, always has been at the sharp end so it’s extra special to win it. We’ll be partying tonight!” 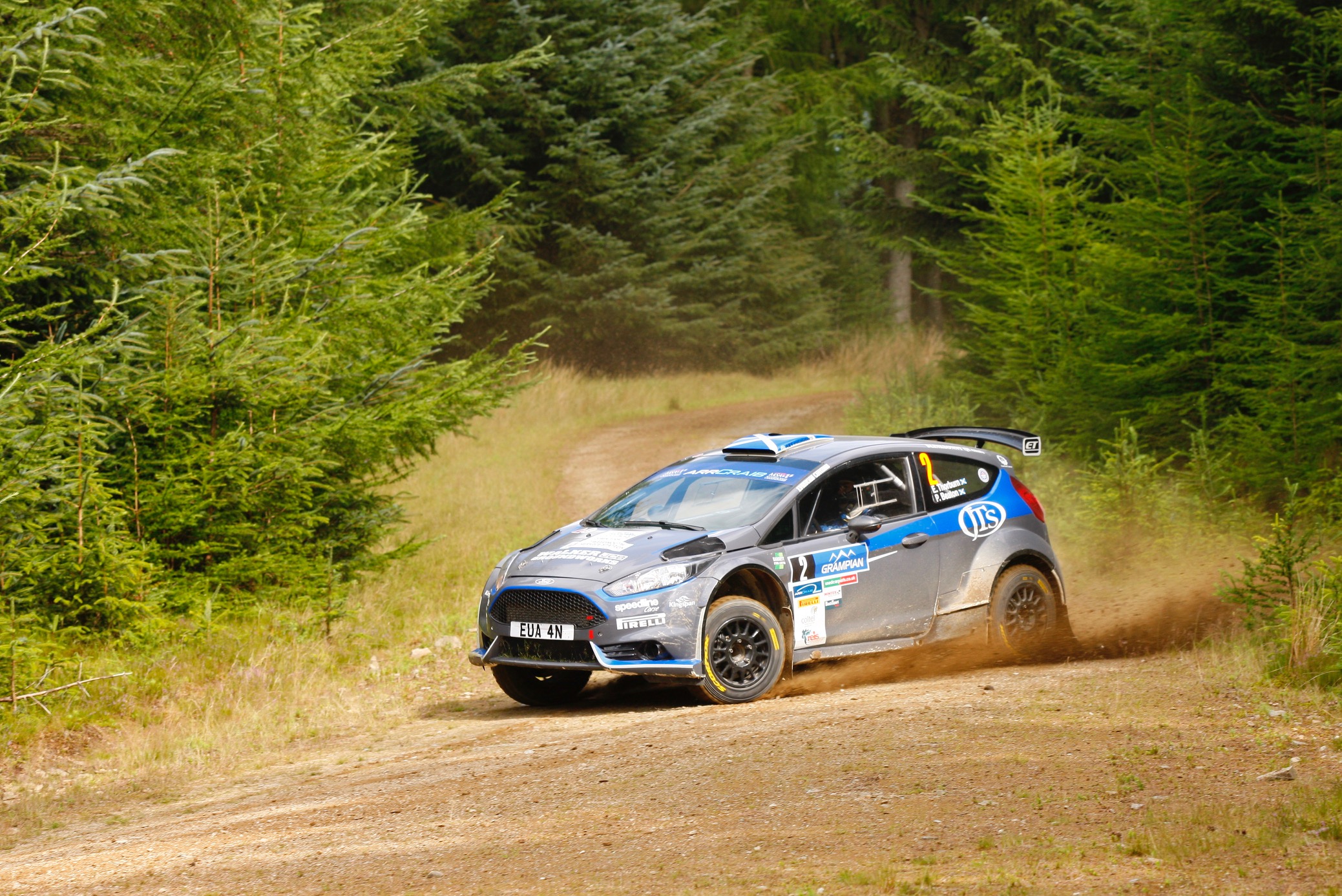 Armstrong and co-driver Paula Swinscoe made it onto the podium for the fourth time this year, but didn’t do enough to keep their title hopes alive.

“I almost went off through the final corners of the final stage, which was a pretty lary moment we got away with,” the outgoing champion explained.

“Well done Euan, a very good result for him. It’s never the best feeling to lose out but I’ve won this championship before and drove quite well today so I can be happy.” 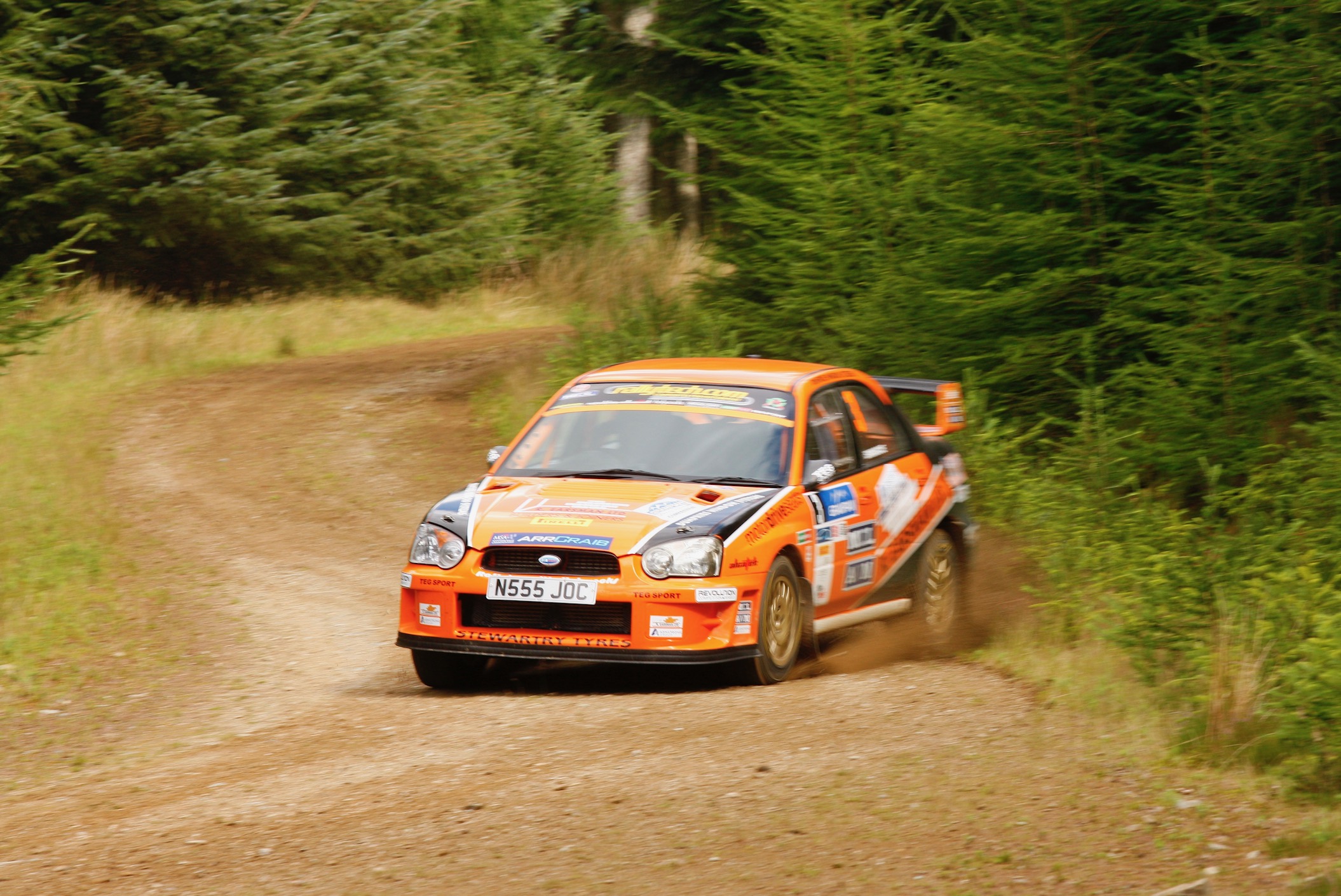 Armstrong missed out on a third consecutive title by finishing behind Thorburn – Image: Lindsay Photo Sport

Fourth was another solid result for Shaun Sinclair and Jamie Edwards but the Oban driver was left frustrated, feeling he should have done better. He finished just three seconds shy of the podium.

Mike Faulkner and Peter Foy came out on top of the Mitsubishi scrap to bag fifth, ahead of Mark McCulloch and Michael Hendry who were waylaid with yet another puncture.

Bruce McCombie and Michael Coutts returned to Scottish Championship action and were happy with seventh, ahead of the even happier Donnie MacDonald who also returned after missing the Argyll in his Ford Fiesta R5; the Inverness driver revelling in the Aberdeenshire stages.

Ninth and tenth places were filled by the leading two Challengers crews, who had an almighty scrap for supremacy.

The battle between Michael Binnie, Simon Hay and Iain Wilson was ferocious all day, with just six seconds separating the trio after SS2. Binnie stole a march in the next loop to head to second service with a 12 second cushion over Hay, only for the Evo VI driver to come back at him in the final two.

In the end a solitary second was all that split the two title rivals at the finish, with Binnie coming out on top on his debut in John Wink’s old Evo IX. Iain Wilson’s brake problems resurfaced but he recovered to take third, 19 seconds clear of John Wink who was debuting the Hyundai i20 R5 in the Scottish Rally Championship. 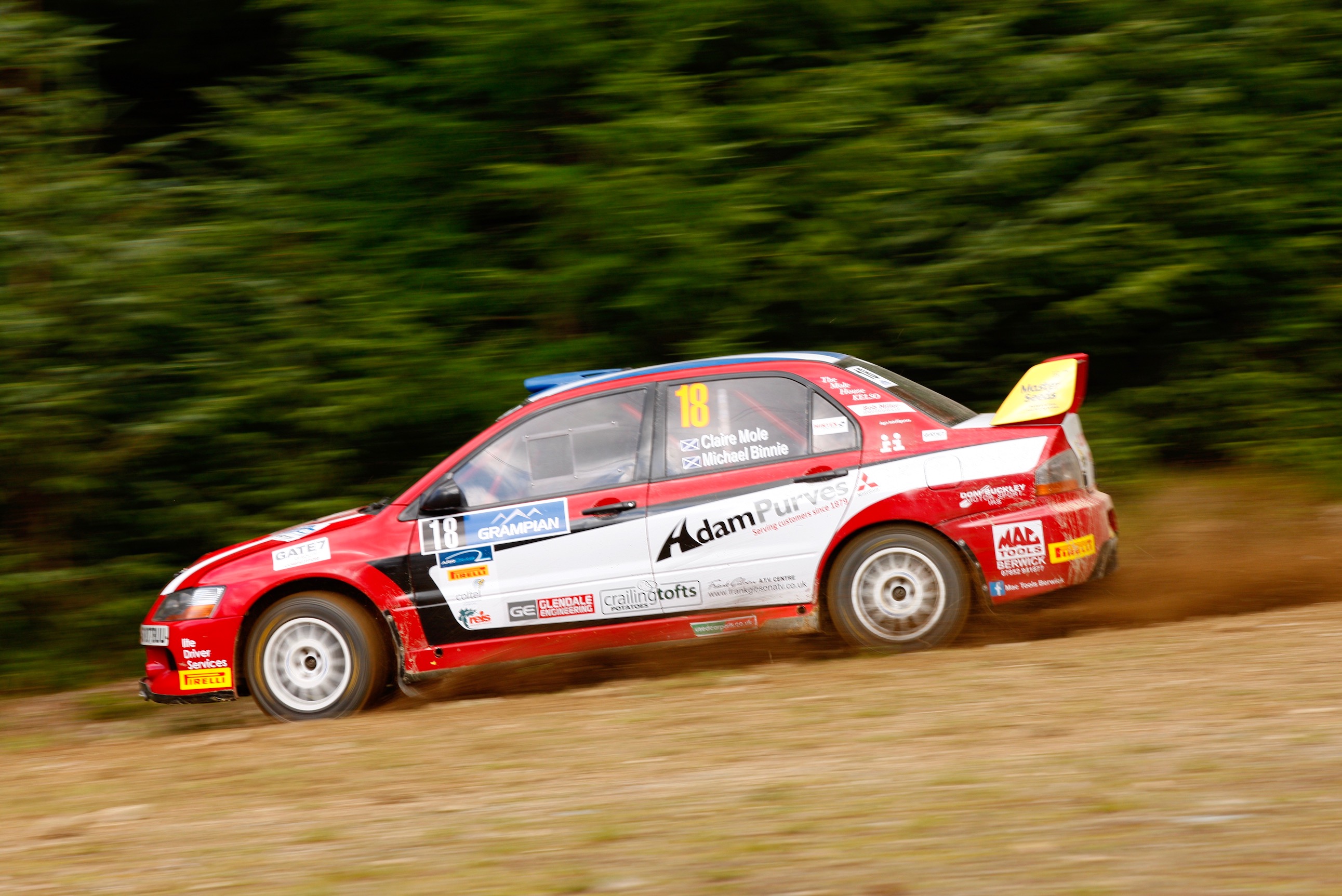 Binnie made the best possible start to life with his new car – Image: Lindsay Photo Sport

The battle for Scottish 2WD honours took a major twist when Mike Stuart rolled his Escort Mk2 on SS2. Having won the previous round in Argyll, Duncan MacDonald ran away to his second victory of the year to reignite his previously dwindling championship hopes. Angus Lawrie took an incredible second place in his Vauxhall Corsa on a giant-killing run, with Paul McErlean bringing his Escort Mk2 home third.

Finlay Retson made his SRC debut on the Grampian and marked it with a win in the Juniors behind the wheel of his Ford Fiesta ST. Gina Walker’s second place was important for her championship challenge, ahead of points leader Andy Struthers who took third; both competitors in Citroen C2’s.

The www.usedcarparts.co.uk Subaru Cup belonged to John McIlwraith for the second time this year. Matthew Thomson came home second in the category ahead of Michael Robertson.

The SRC John Horton Star Driver Award was awarded to Lawrie after his incredible pace and determination to win his class, come home second in the 2WDs and finish 22nd overall on the event.

“This certainly means a lot,” he revealed. “It’s been a goal of mine to receive this award ever since it was announced, it’s such a great opportunity. To be recognised out of all the competitors here today is really special and I am so happy! It’s great for all the team who are involved just as much as me, this is certainly a team sport.” 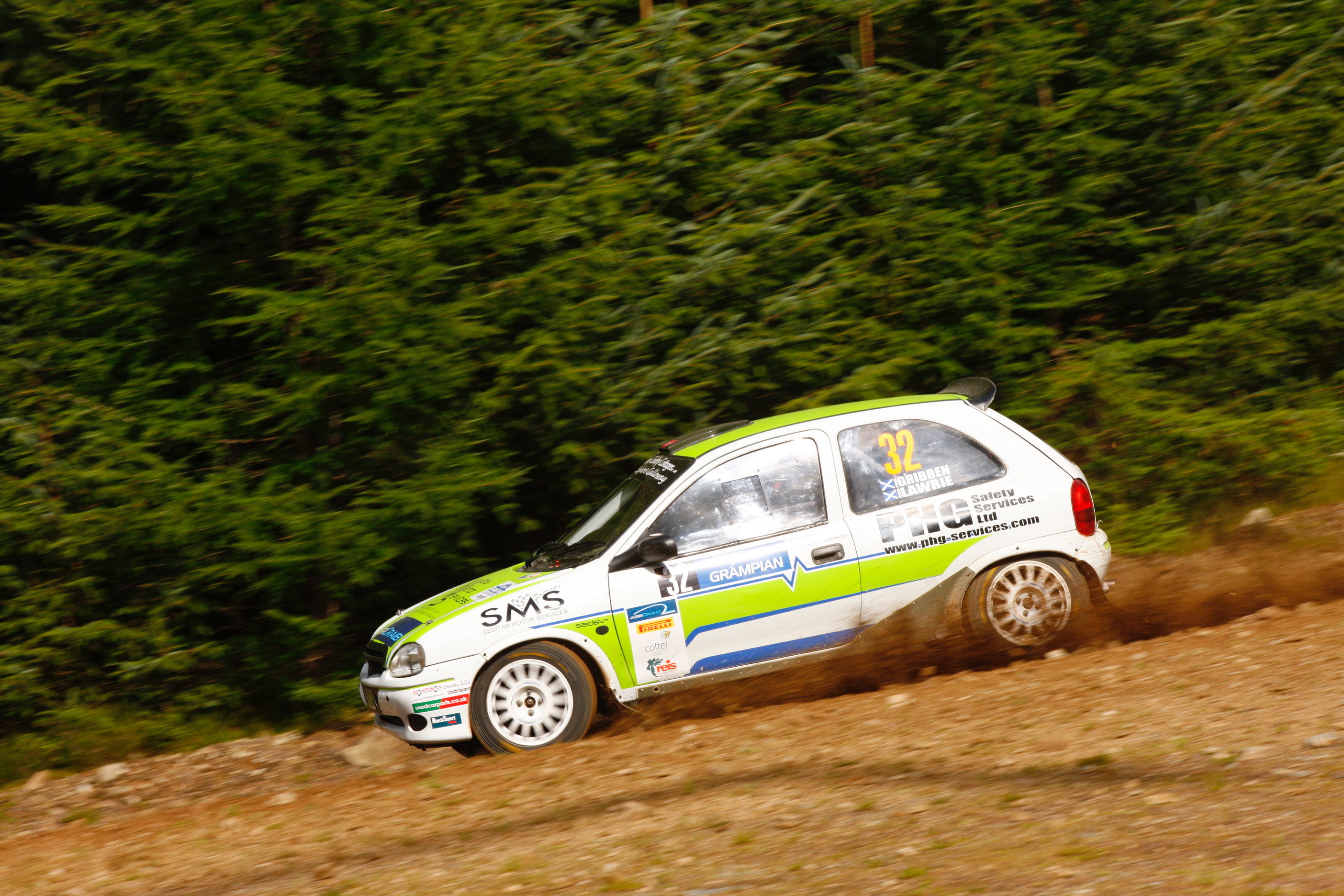 Lawrie has been eyeing up the Star Driver Award – Image: Lindsay Photo Sport

Lawrie joins Thomas Gray, Greg McKnight, Michael Binnie, Mike Stuart and Alex Pirie in an end-of-season shoot-out for a supported entry on a European event at the end of the year.

The Scottish Rally Championship concludes on the Armstrong Galloway Hills Rally on Saturday 9th September. With Thorburn and Beaton taking the overall spoils, the focus now switches on the other categories in what promises to be an epic rally to close the season. 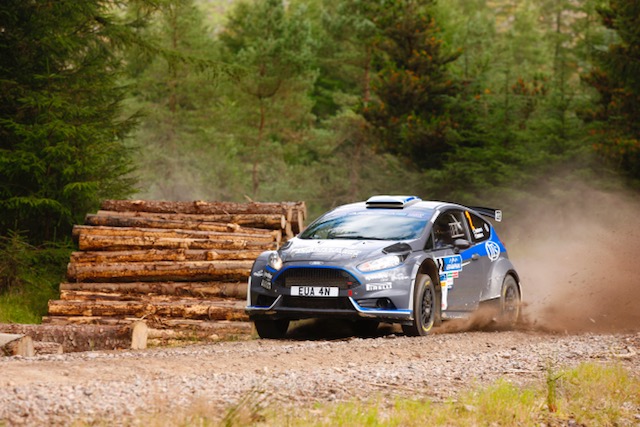 Thorburn has taken the title having never been off the podium in 2017 – Image: Lindsay Photo Sport