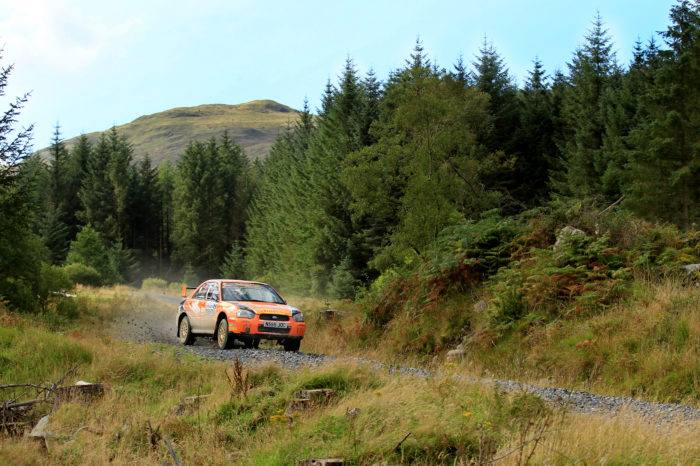 The 2017 ARR Craib MSA Scottish Rally Championship (SRC) reaches its conclusion this weekend (9th September) as the series heads to Castle Douglas for the traditional end of season finale.

The event consists of over 40 stage miles with just one service break adding an extra challenge to the day’s rallying, with the cars leaving the beautiful Threave Garden and Estate just outside the rally base at around 9am, before returning around six hours later.

Eight time winner of the event Jock Armstrong will be first into the stages on Saturday. The local man has Cameron Fair alongside him, replacing long-term co-driver Paula Swinscoe, but he will be pushed hard by newly crowned champions Euan Thorburn and Paul Beaton in their Ford Fiesta R5. 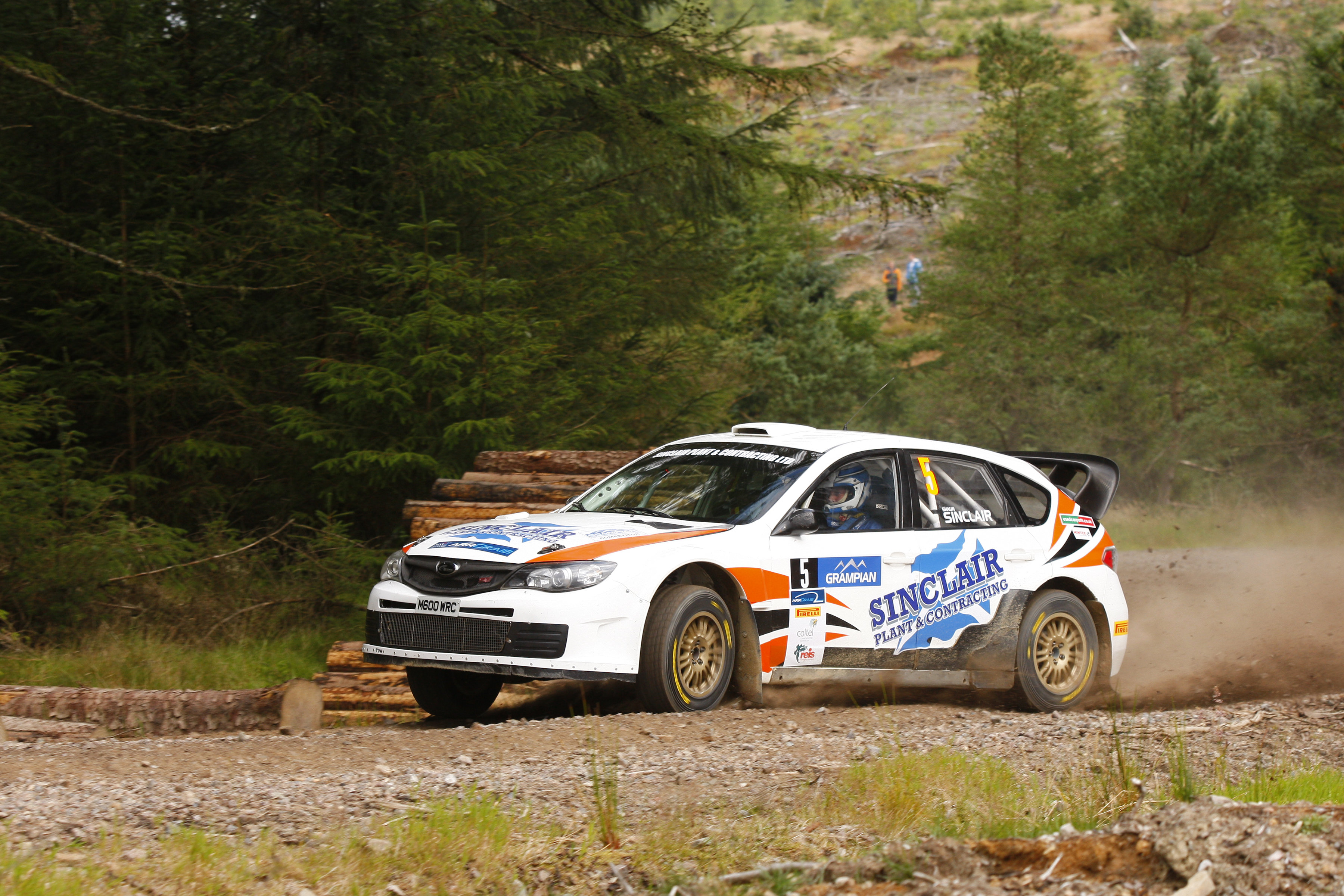 Winless so far this year, Sinclair & Edwards have one more chance to put that right – Image: Lindsay Photo Sport

Shaun Sinclair and Jamie Edwards have been contenders all year long but are yet to score their first SRC win of the season. The pair start at two in their Subaru Impreza S14 WRC, and will be determined to end the season on a high.

Mike Faulkner and Peter Foy will also be looking for a strong result to end their season, with the Evo IX crew in a tight battle with Sinclair and Edwards for third spot in the championship.

Rory Young and Allan Cathers return to the SRC in their Ford Fiesta R5 for the first time since the Scottish Rally in May, ahead of Mark McCulloch and Michael Hendry who have shown sublime pace on the last few rounds. The Mitsubishi pairing could be an outside bet for the podium. 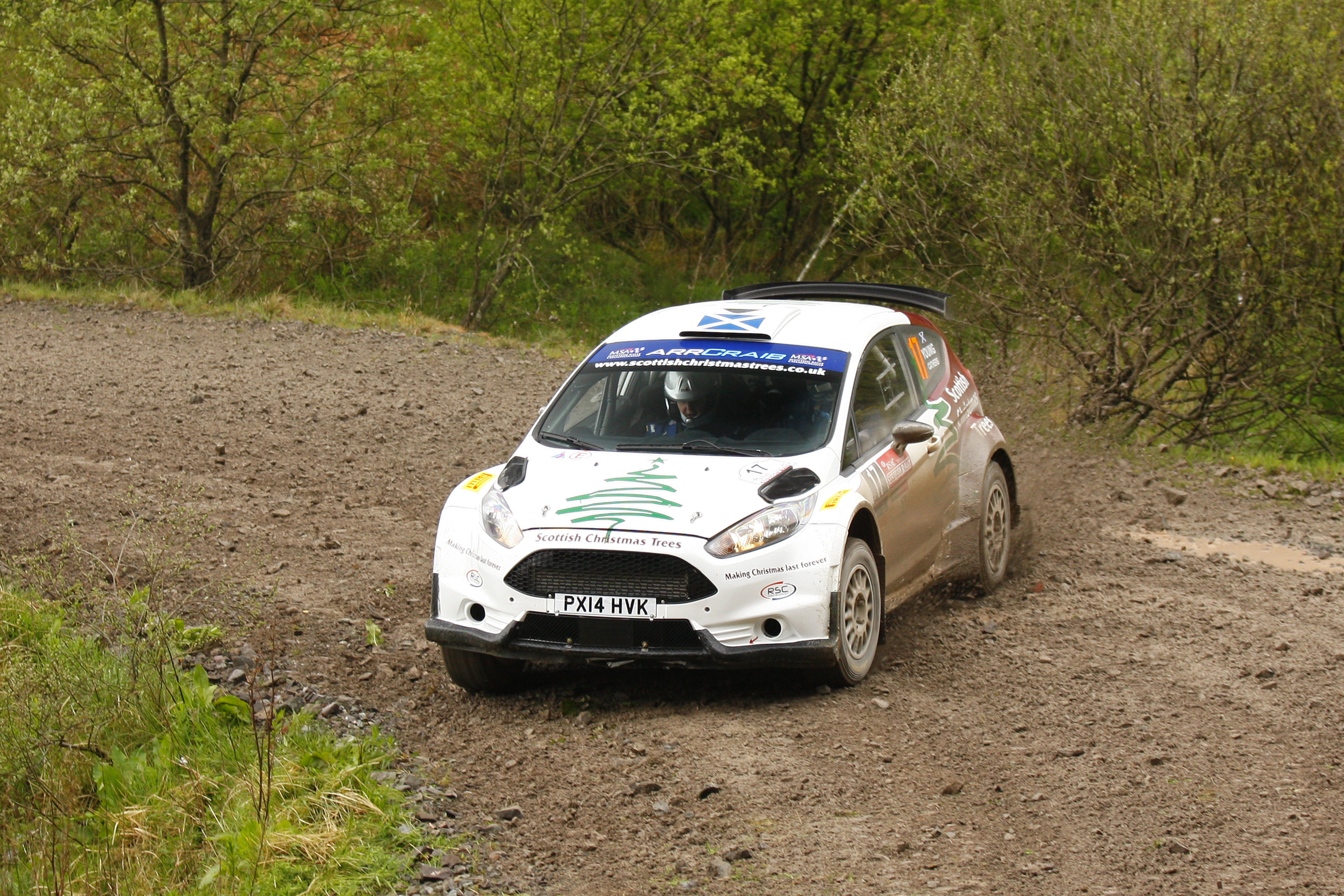 Rory Young has been a podium contender on each of his SRC appearances in 2017 – Image: Lindsay Photo Sport

David Bogie and Kevin Rae are back in the SRC for the fourth time this season, but not behind the wheel of their Skoda Fabia R5. Instead the five time champions are debuting their Ford Escort Mk2 on gravel, and start at six in their Millington powered machine.

Bruce McCombie has Daniel Forsyth alongside him for the first time and starts at seven, ahead of the right hand drive Fiesta R5 of Donnie MacDonald and Andrew Falconer.

Fred Milne will debut his new, lighter Mitsubishi Evo IX with a fifth different co-driver of the year beside him in Neil Shanks. Andrew Gallacher will start his first SRC event of the year alongside Jane Nicol in the ex-Mark Higgins Ford Focus WRC. 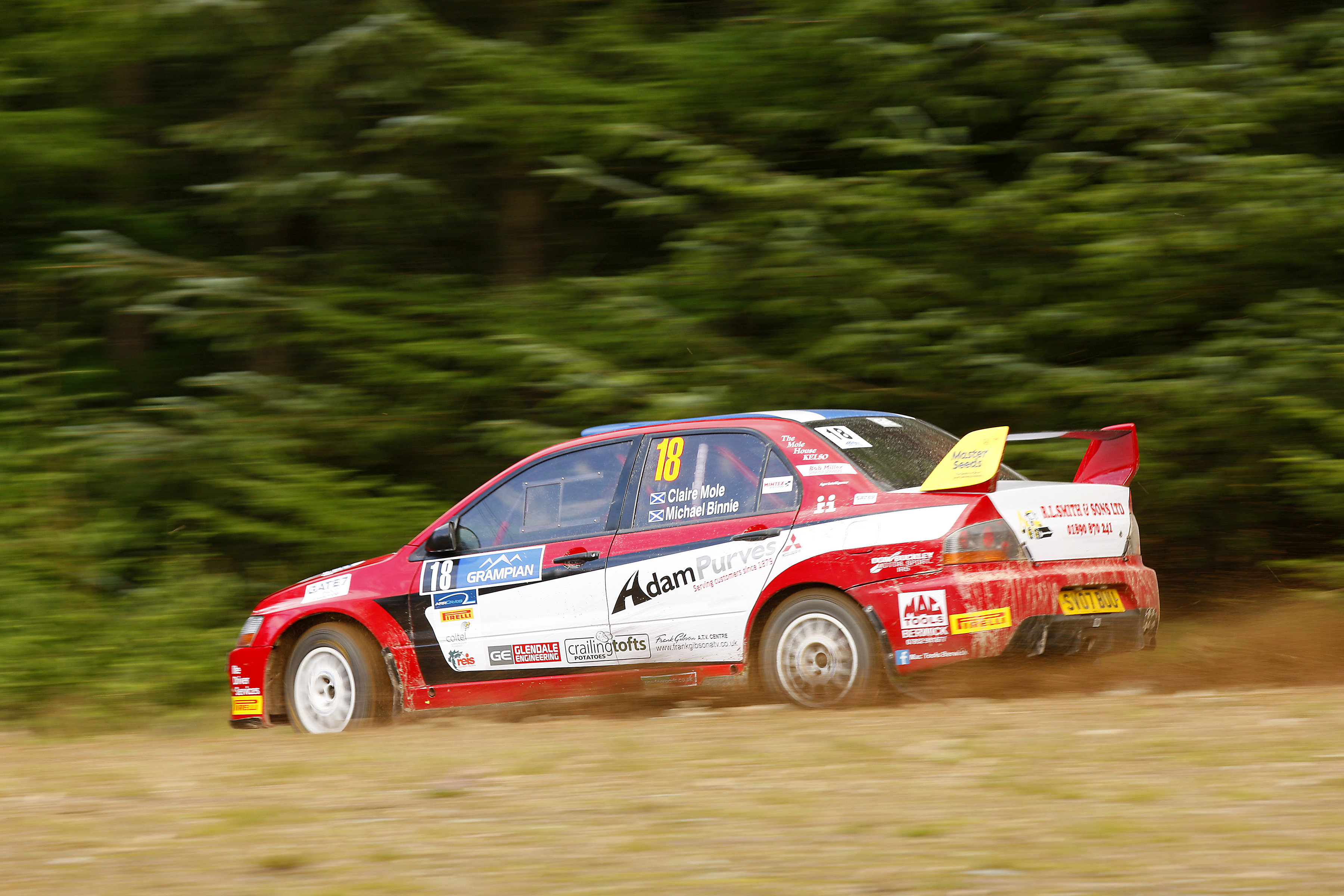 Michael Binnie, Simon Hay and Iain Wilson line up next, with the trio involved in a huge battle of supremacy for the SRC Challengers championship and Class 10 honours.

Just one second separated Binnie and Hay on the last round up in Aberdeenshire; an advantage that would prove vital to the Cornhill driver who heads to Castle Douglas with a two point lead over Hay.

Victory for Binnie would seal him the championship, while a win for Hay with Binnie third or lower would hand the Aberdeen driver the title. Iain Wilson can still win the title in his Subaru Impreza, but is four points adrift and is realistically needing his Mitsubishi rivals to hit trouble. 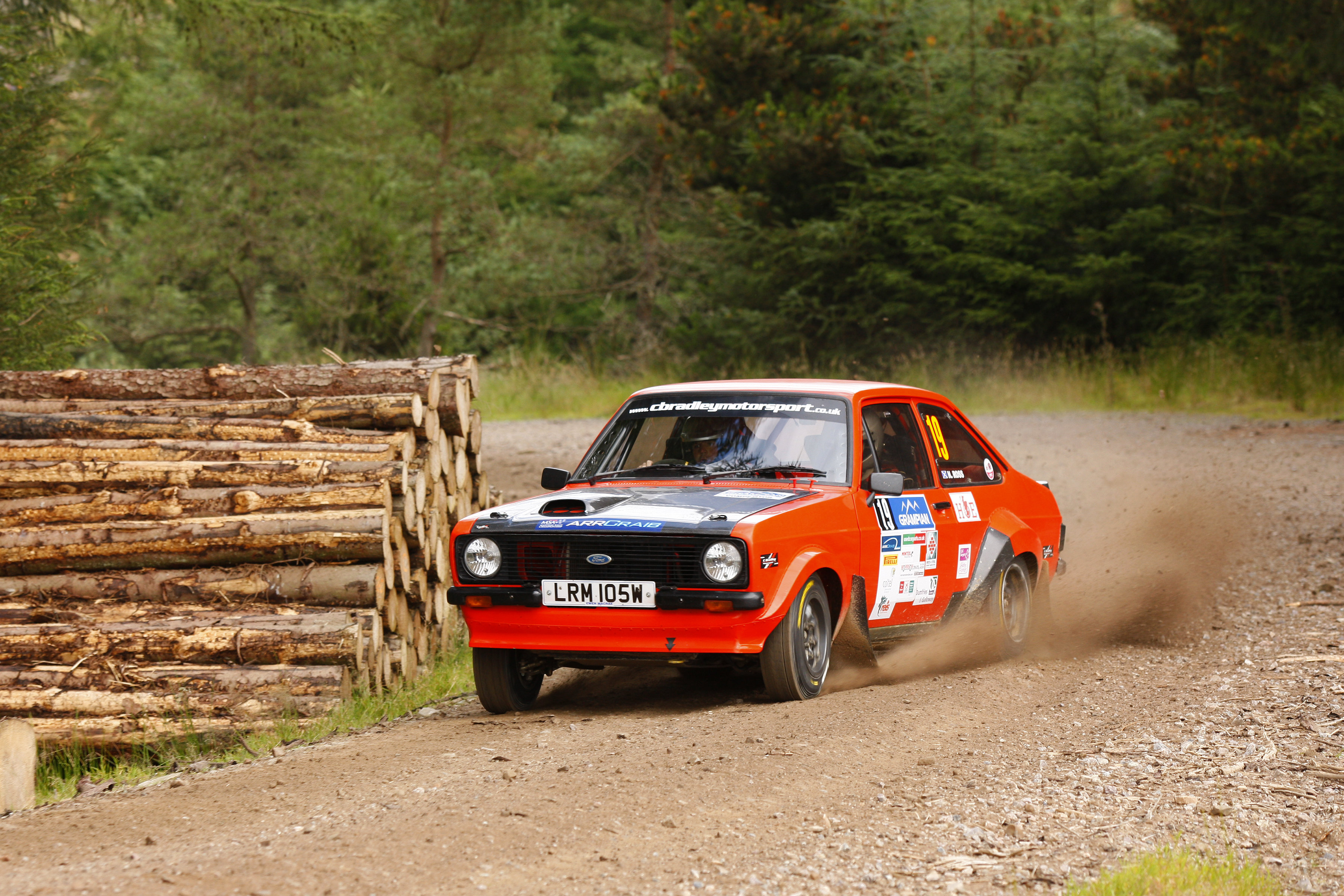 Things are a little clearer cut in the Scottish 2WD Championship. Dougal Brown heads to Dumfries & Galloway with a 17 point advantage, knowing he only needs to beat his rivals Duncan MacDonald and Mike Stuart to take the championship.

That will be easier said than done however with the recent form of MacDonald, who won both the Argyll and the Grampian. He is currently third, just behind the impressive Mike Staurt, with all three Escort drivers likely to be challenged for the event win by David Bogie.

Andy Struthers, Max Redpath and Gina Walker will all start the Galloway Hills Rally aiming to take the SRC Juniors title and the free entry into the Wales Rally GB National Rally that comes with it.

Struthers has been a model of consistency but trails the Peugeot 205 of Max Redpath by a single point ahead of round seven. That means victory for either driver would net them the title, with Gina Walker needing to win and have another driver separate her from Struthers and Redpath to become Junior Champion. 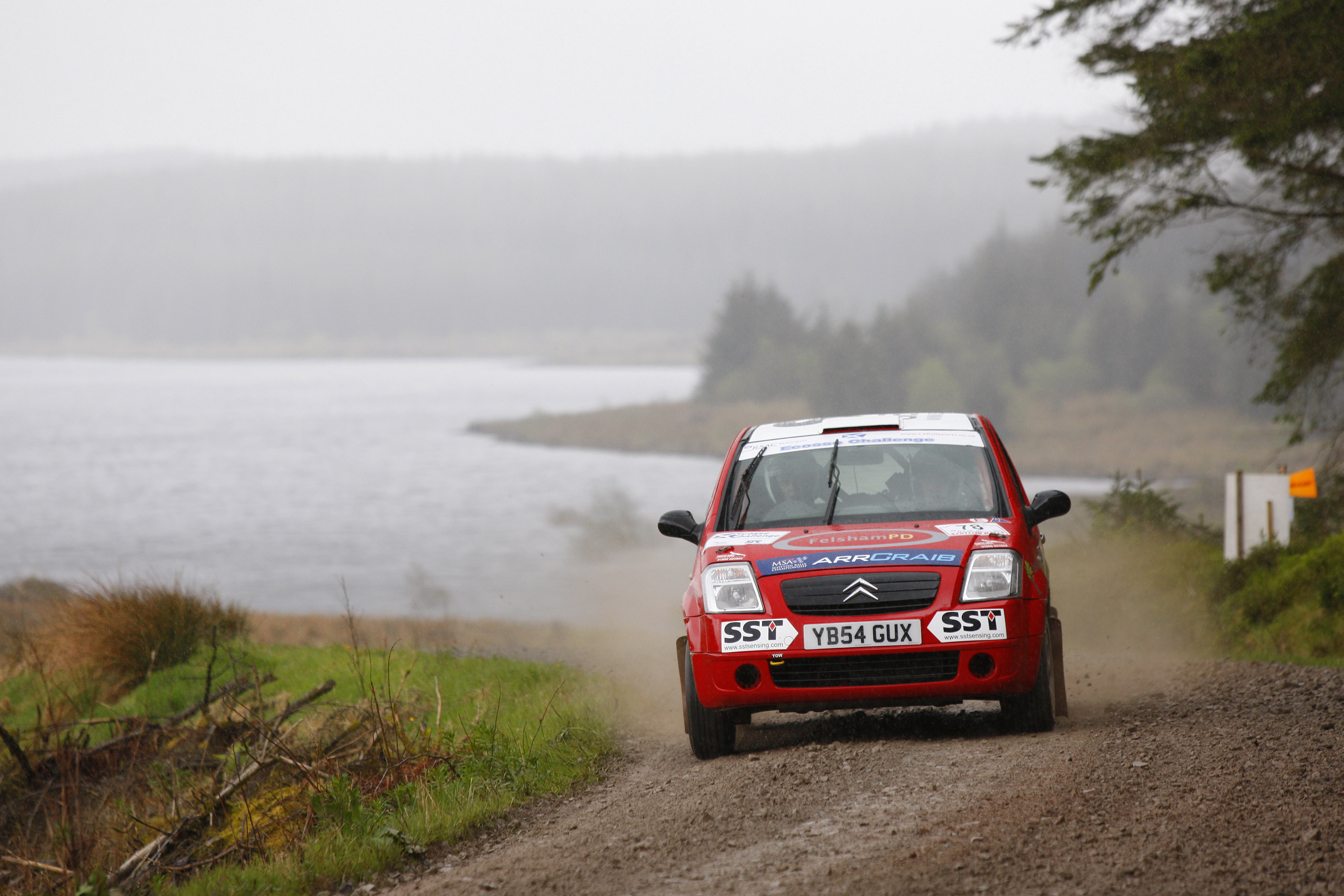 Things couldn’t be tighter in the www.usedcarparts.co.uk Subaru Cup with title protagonists Michael Robertson and Colin Baxter tied on 118 points. Both drivers have one category win apiece in 2017, with Robertson the more consistent across the season. John McIlwraith is the form man, but the championship is out of his reach.

The SRC John Horton Star Driver Award is also nearing its completion, with four more drivers set to receive a nomination for the shoot-out on September 20th in the coming week. One competitor will receive the award for their performance on the Galloway Hills before three wildcard entrants are announced shortly afterwards.

Eleven championships can still be won on the Galloway Hills, making the final round of the SRC one you can’t afford to miss.