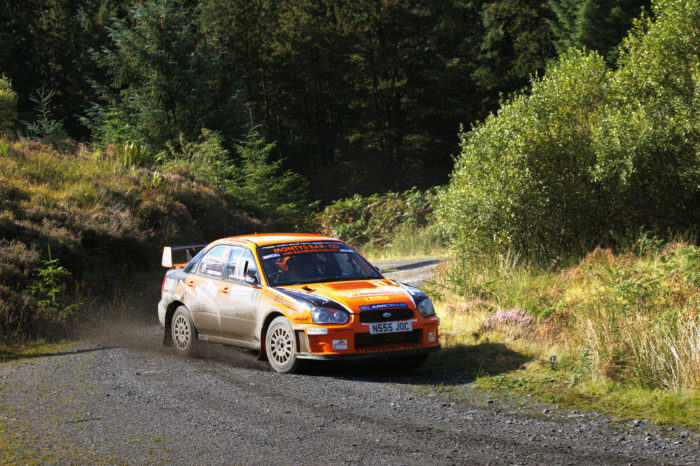 Jock Armstrong and Cameron Fair took a convincing victory on the Armstrong Galloway Hills Rally this weekend (9th September), the final round of the 2017 ARR Craib MSA Scottish Rally Championship.

Rory Young and Allan Cathers rounded off the top three SRC crews, and completed the podium in their Fiesta R5.

Despite some changeable weather leading up to the event, conditions were relatively dry for the seventh and final round of the Scottish Championship season. Local man Jock Armstrong with new co-driver Cameron Fair alongside, was out of the box quickest in his Subaru Impreza, winning the opening three tests before service to open up a convincing lead.

Armstrong’s closest challengers were Sinclair and Mike Faulkner who were involved in a scrap for second and third overall in the championship. However, both would fall back in the final test. Sinclair suffered a launch control failure and Faulkner, with co-driver Peter Foy alongside left the road after an enforced temporary suspension fix failed.  This left the 2015 and 2016 SRC Champion clear to take a record-breaking ninth win on the Galloway Hills Rally.

“That was seriously hard work today,” Armstrong admitted. “It all came together today. We nailed the first stage, then the second and it just continued on from there. Cammy [Fair] was quietly nervous this morning, but he got over that and he kept producing the goods, which is more than fine by me.” 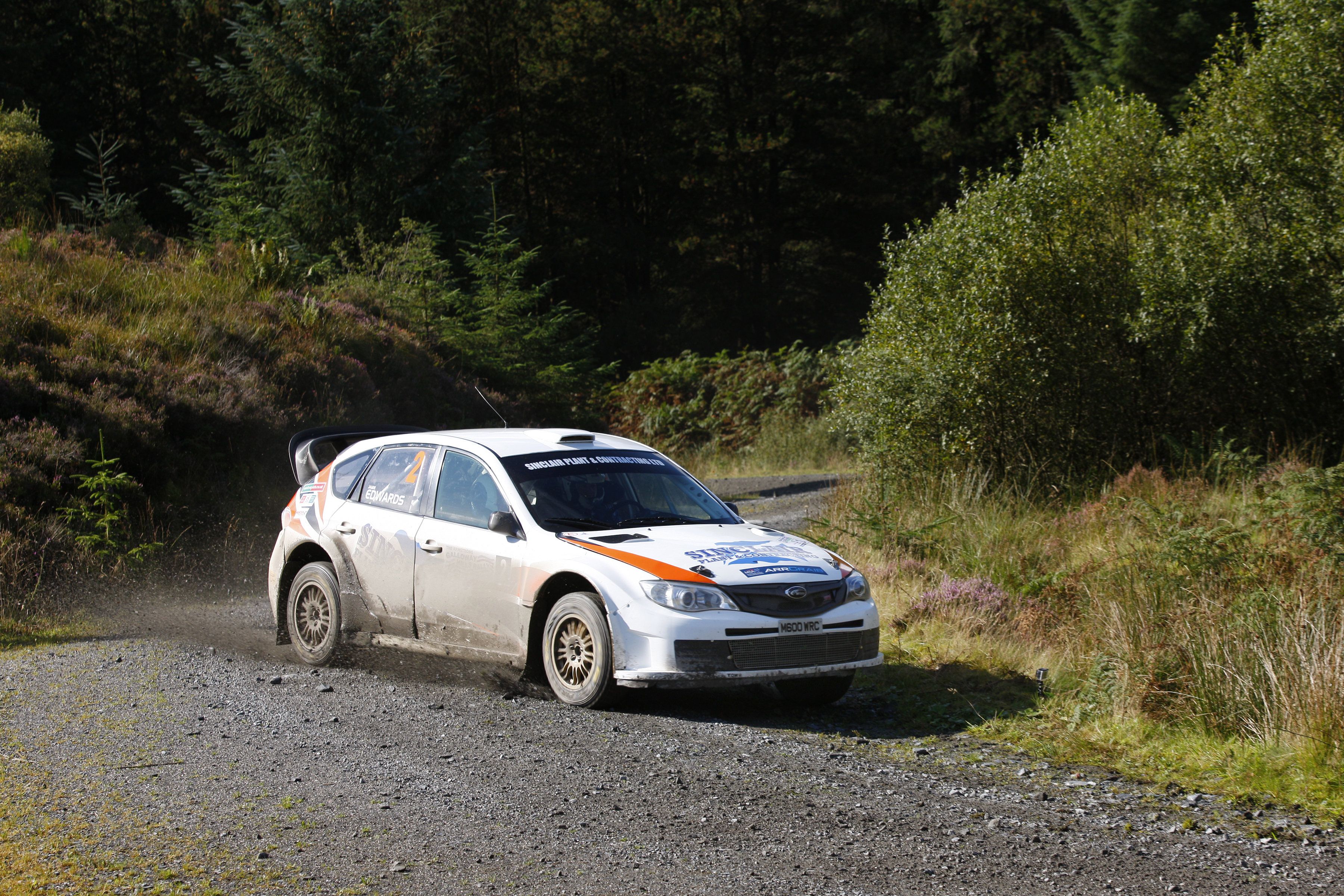 Sinclair and Edwards were desperate to win their first event of the year, but were happy with the progress they made.

“We were a lot closer to the pace than we’ve been the last three or four rallies, so we can be happy about that,” Sinclair said. “The stages were terrific, some of the best we’ve been on this year, very fast and flowing.

“It’s been a great year all in all, Jamie [Edwards] has improved me massively as a driver. Sure this car is quick but he’s helped me really commit and be quick with it through the corners.” 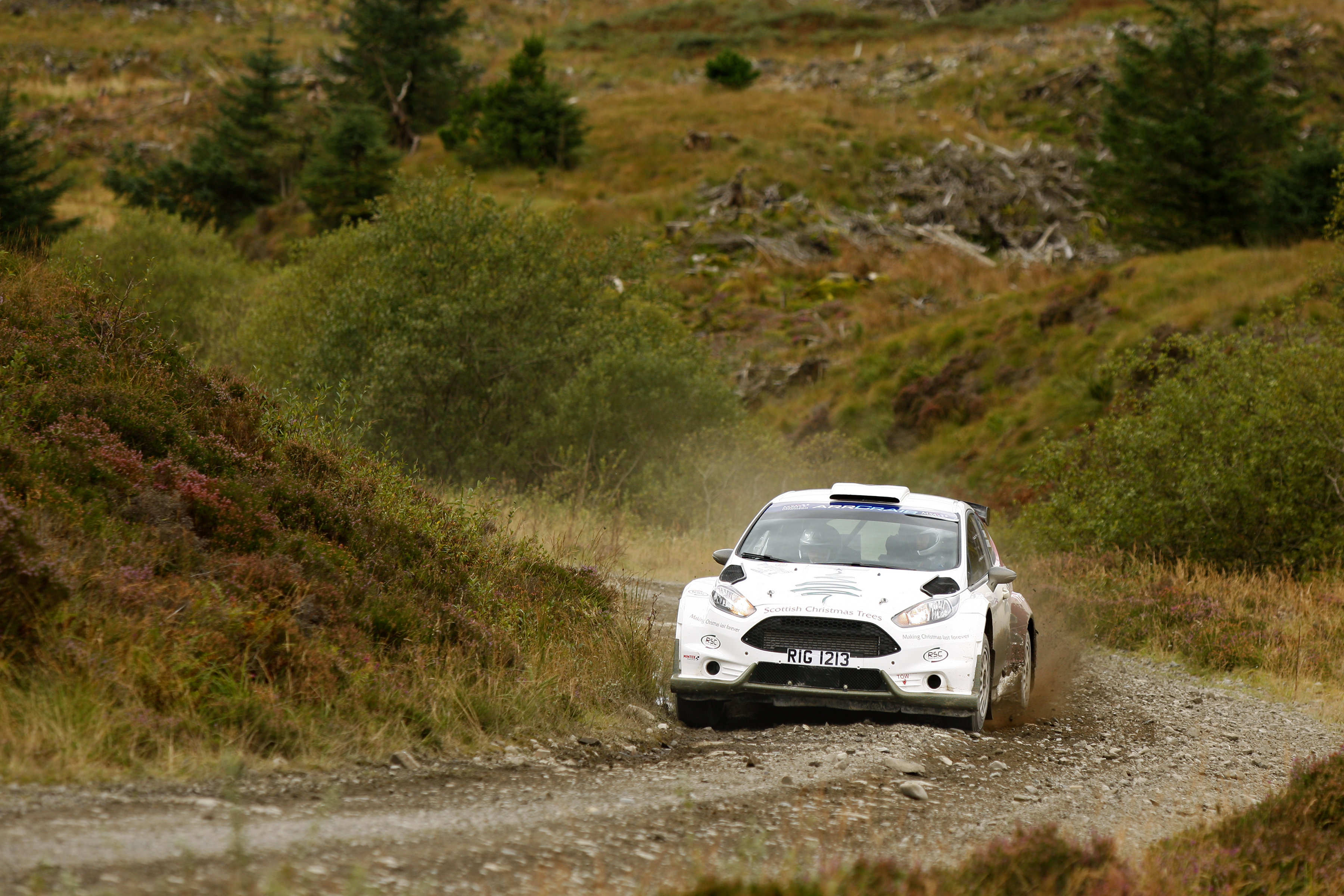 Young and Cathers were delighted to secure their first Scottish Championship podium in a different Fiesta R5 to the one they’ve used on three previous rounds this year. The Dumfries driver finished just 12 seconds behind Sinclair at the finish.

“It’s been a fantastic day, but I’m ashamed to say this is only the second time I’ve done my ‘local’ event as a driver,” Young confessed. “To get onto the SRC podium is a great boost. Rather unexpected but a nice surprise.”

Mark McCulloch and Michael Hendry brought their Mitsubishi Evo IX home fifth overall and fourth in the SRC, staying in touch with the leaders all day to come home just nine seconds behind Young’s R5.

McCulloch suffered a slow start emerging the first test in ninth place, but set some sublime stage times to climb back up to fourth at the finish. That, coupled with his improving pace throughout the year was enough to see him rewarded the SRC John Horton Star Driver Award for the Galloway Hills Rally, putting him forward to the shootout later this month.

“This was a great way to end our season with such a nice reward,” McCulloch said. “We feel like we’ve posted some great stage times this year, against such fierce competition. Receiving the Star Driver Award just tops it all off!” 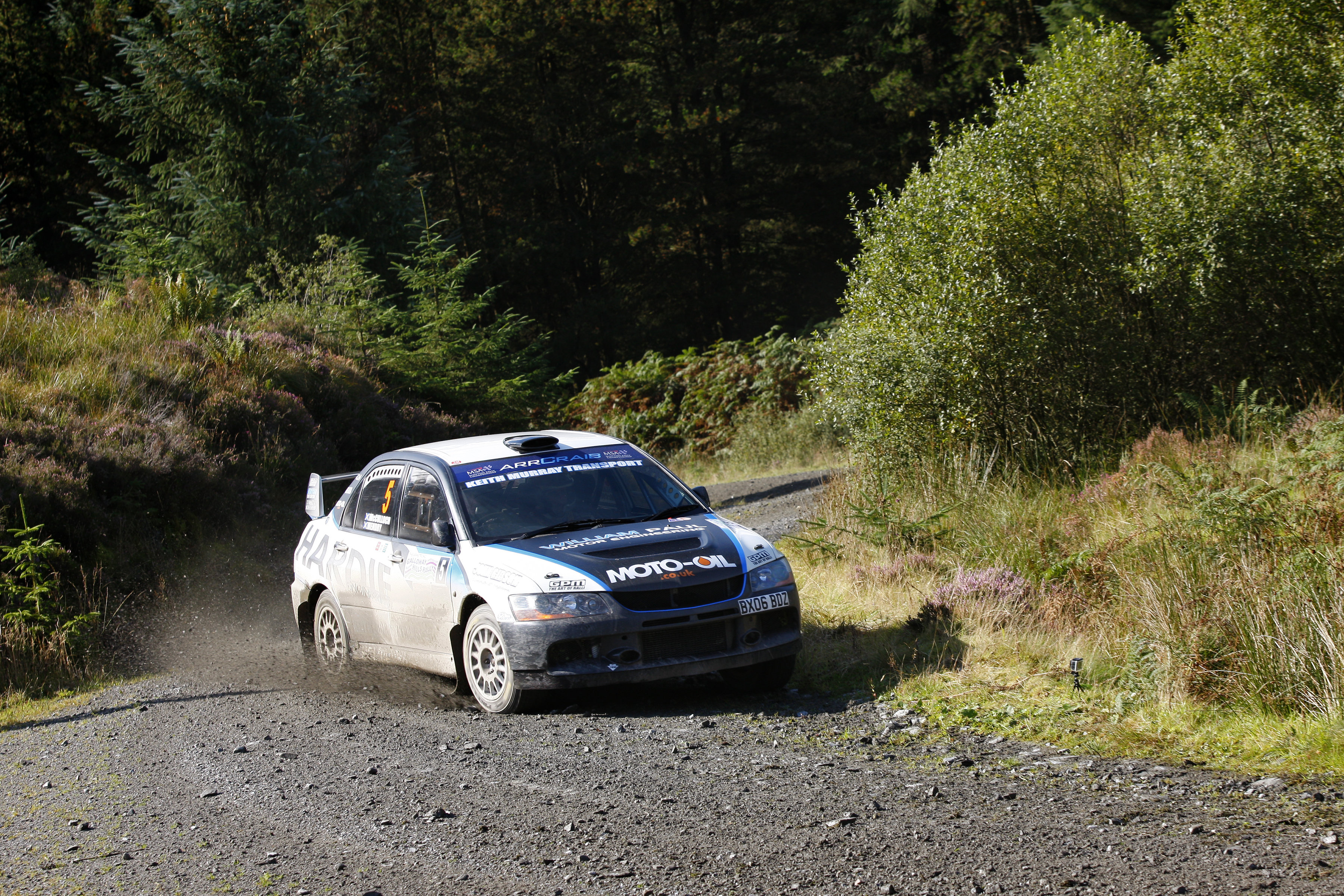 David Bogie and Kevin Rae were back out in the SRC but in their Millington powered Ford Escort Mk2 instead of the usual Skoda Fabia R5. The winner of three rounds this year came home sixth overall but elected not to score SRC points.

Binnie and Mole started the event looking to win the SRC Challengers title with their Evo IX, with Simon Hay and Calum Jaffray their biggest threat in an older Evo VI.

Binnie had the bit between his teeth and went a massive 24 seconds faster in SS1, before seeing the gap erode to 13 at first service. A good time in SS4 set the Borders crew up nicely, but in the end the pair needn’t have worried as in their effort to overhaul their rivals, Hay and Jaffray went off the road in the final stage.

“We were on the pace straight away, these fast, flowing stages certainly suit me,” Binnie enthused. “We thoroughly enjoyed the battle, and made a few changes to the car such as the suspension and even the steering wheel so I felt really comfortable. Having Claire [Mole] alongside me who I trust so much is also a big bonus.

“To win the Challengers Championship is brilliant. Our engine blew up on the Snowman which was the worst possible start but from then on we were not only consistent but consistently quick. Everybody in the team has really pulled their finger out which has paid off for us.” 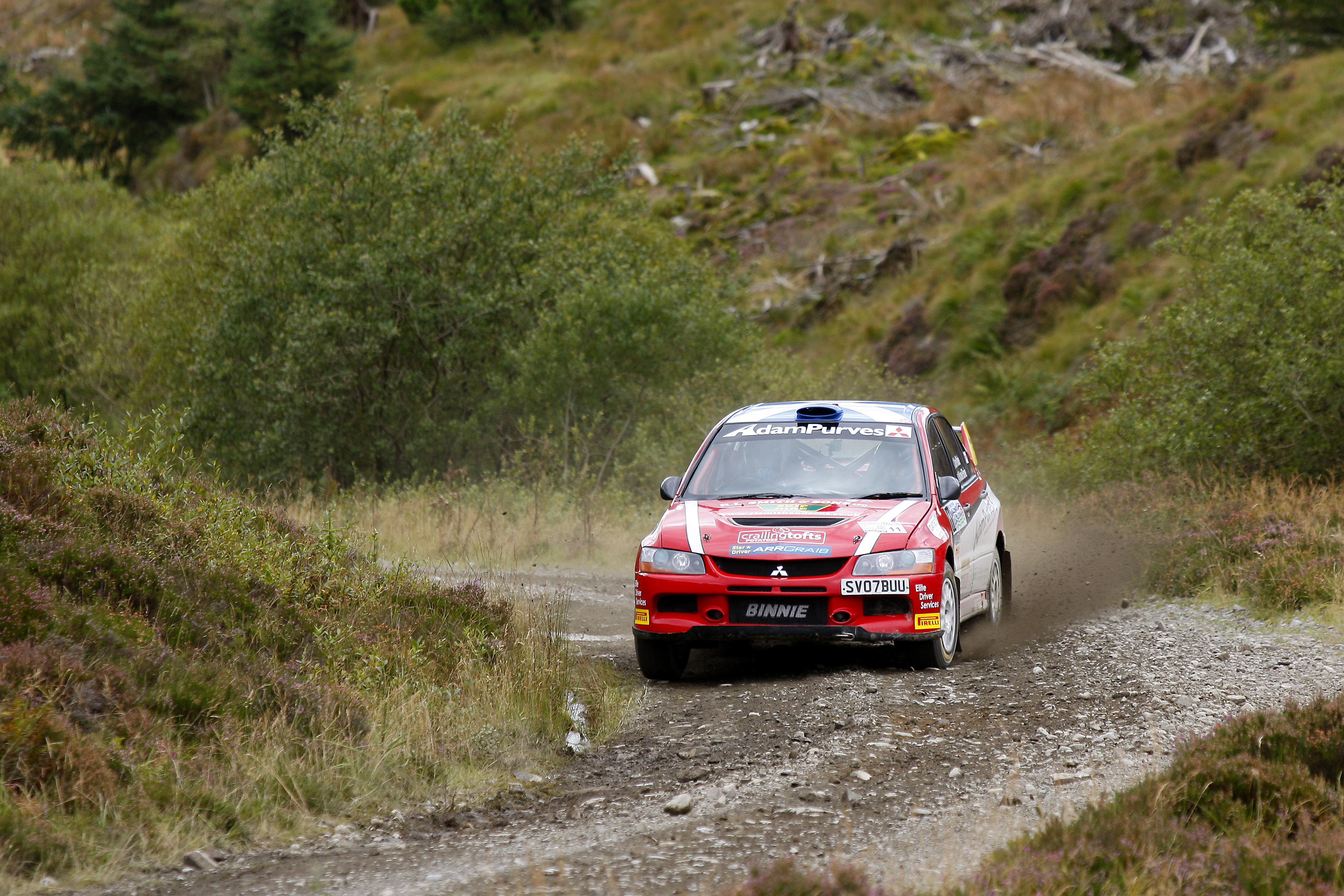 The Scottish 2WD Championship was won by Duncan MacDonald and Neil Ross who took a superb top ten SRC finish and their third two wheel drive win in a row. Angus Lawrie and Paul Gribben had a good day despite axel rod issues in their Corsa, taking the Class 3 title and second in the two wheel drives ahead of Steve Bannister’s Escort Mk2.

Dougal Brown and Lewis Rochford endured a difficult event in their Mk2, but did all they needed to do to claim the category championship.

Gina Walker finished as top Junior in her Citroen C2 but it wasn’t enough for her to take the title and the entry into the Wales Rally GB National that goes with it. That went the way of Max Redpath who steered his Peugeot 205 home in second on the Galloway, ahead of Andy Struthers’ Citroen C2.

The www.usedcarparts.co.uk Subaru Cup went down to the wire, with Colin Baxter and Michael Robertson fighting it out in a winner takes all battle aboard their GC8 Imprezas. John McIlwraith took the Galloway win, but it was Colin Baxter who took the championship, just over 30 seconds ahead of Michael Robertson. 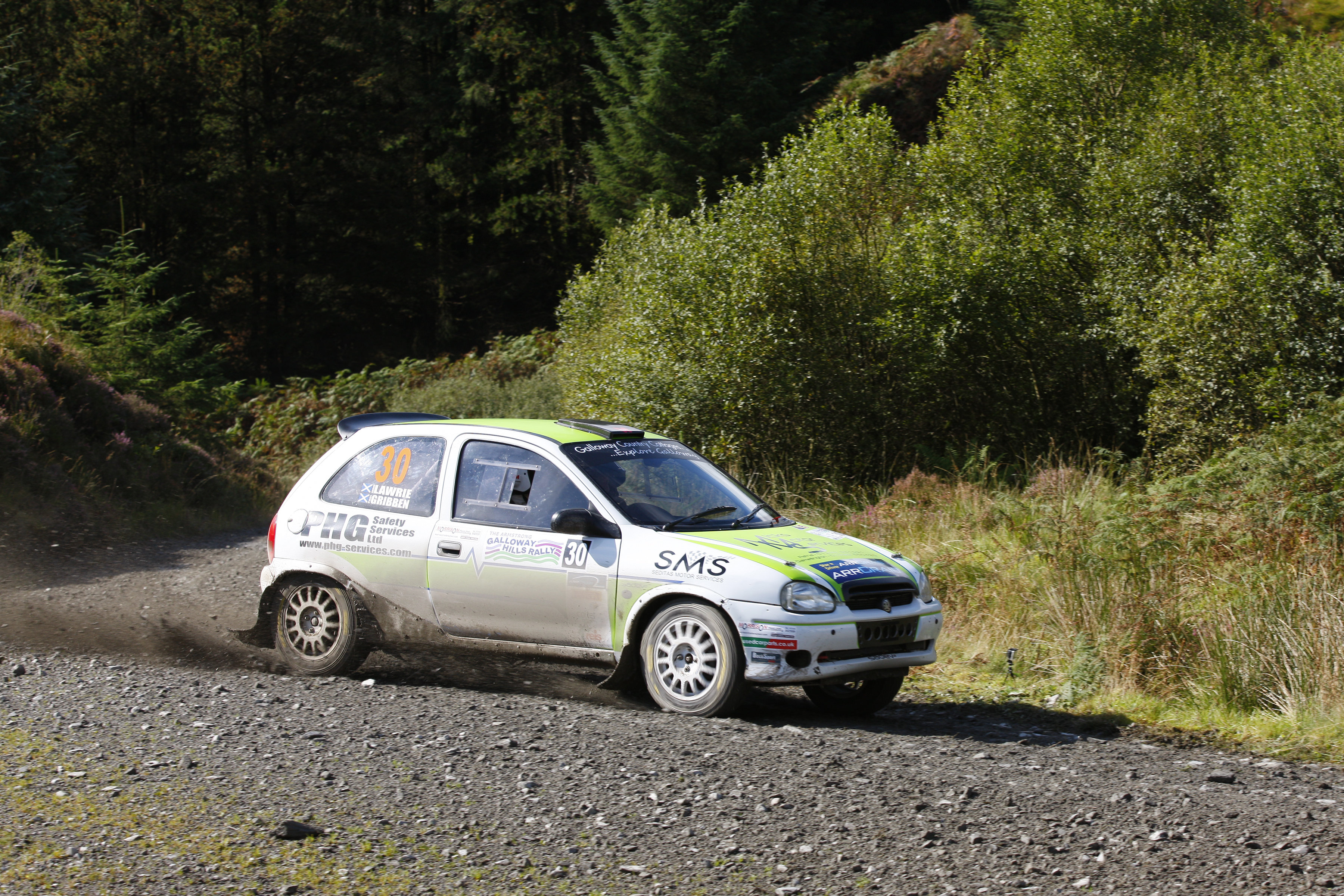