Gallacher storms to inaugural win at the Snowman 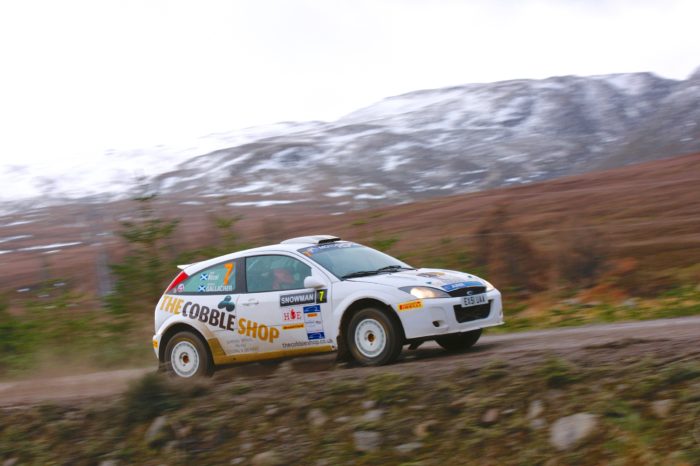 Gallacher, along with co-driver Jane Nicol held onto the lead of the unpredictable Inverness based event from the second stage, to win by a slender six second margin in their Ford Focus WRC.

Quintin Milne and Sean Donnelly went on an almighty charge over the closing stages to close the gap in their Subaru Impreza WRC, with Donnie MacDonald and Andrew Falconer completing the podium in their Ford Fiesta R5.

Anticipation was high ahead of the 50th ever season of the series, with the previous three champions David Bogie, Euan Thorburn and Jock Armstrong all absent from the entry list.

Sensing his opportunity, Gallacher made the brightest possible start by drawing level with Mark McCulloch on the opening test. McCulloch and co-driver Michael Hendry were making their debut in a Fiesta R5 but a troublesome day saw the pairing finish outside the top ten.

Gallacher would then lose out to MacDonald in stage two, but won the next to retake the lead as the stage conditions began to deteriorate into a mix of damp gravel and ice. The Hurlford driver would open up a 24 second lead going into the final stage but with a brace of drivers within arm’s reach of victory.

Milne put in a superb drive through the final six mile test to whittle down Gallacher’s advantage, but it wouldn’t be enough to deny him his maiden SRC win and the chance to create history, replicating his father Drew’s victories of 1977 and ’79.

“We had a relatively clean run through the whole day but there were still a few moments in there.

“We put new tyres on for the last stage after running old tyres all day, and thought we would just take our time, but I’ll be honest we were starting to worry we might be caught.

“We knew we had to wait on all the results coming through before we knew [we’d won] as it was such a tight battle, but an amazing feeling.”

Milne gave it his all to try and win his first SRC event since the 2013 Border Counties, but ultimately fell short, recovering from a slow start that saw him 13th after the opening stage. 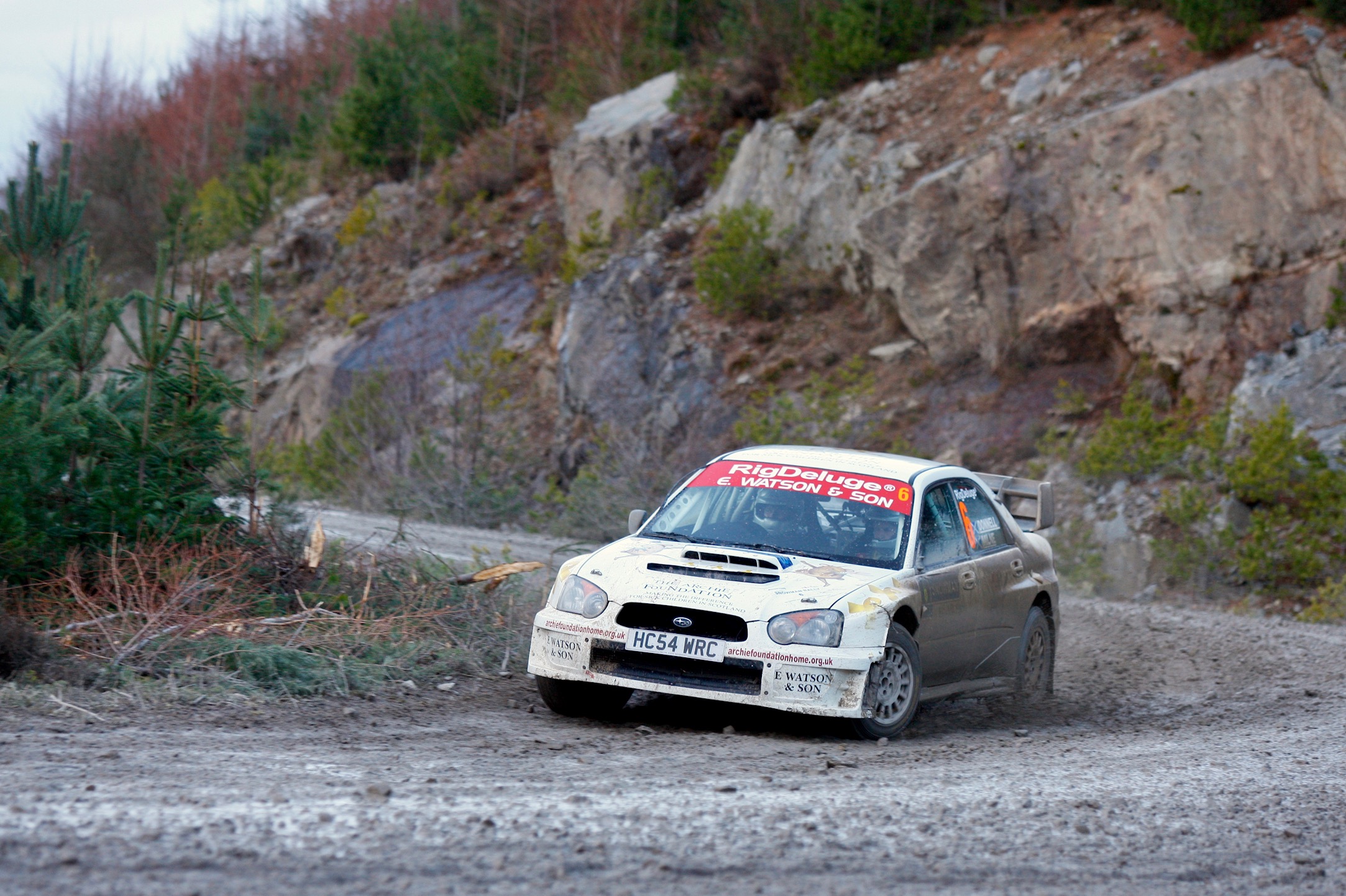 Despite a charge-back in the afternoon, Milne could not catch Gallacher to take 2nd overall
– Image: Lindsay Photo Sport

“I felt really at home on that last stage, and took 20 seconds back from Gallacher,” Milne said. “We were a passenger in sixth gear a couple of times.

“I was getting quicker all day. I should’ve done a bit more practice as I’ve spent the whole day learning the car but a damn good result all things considered.

“Gallacher has driven well all day, as have a lot of others, in what were really challenging conditions.” 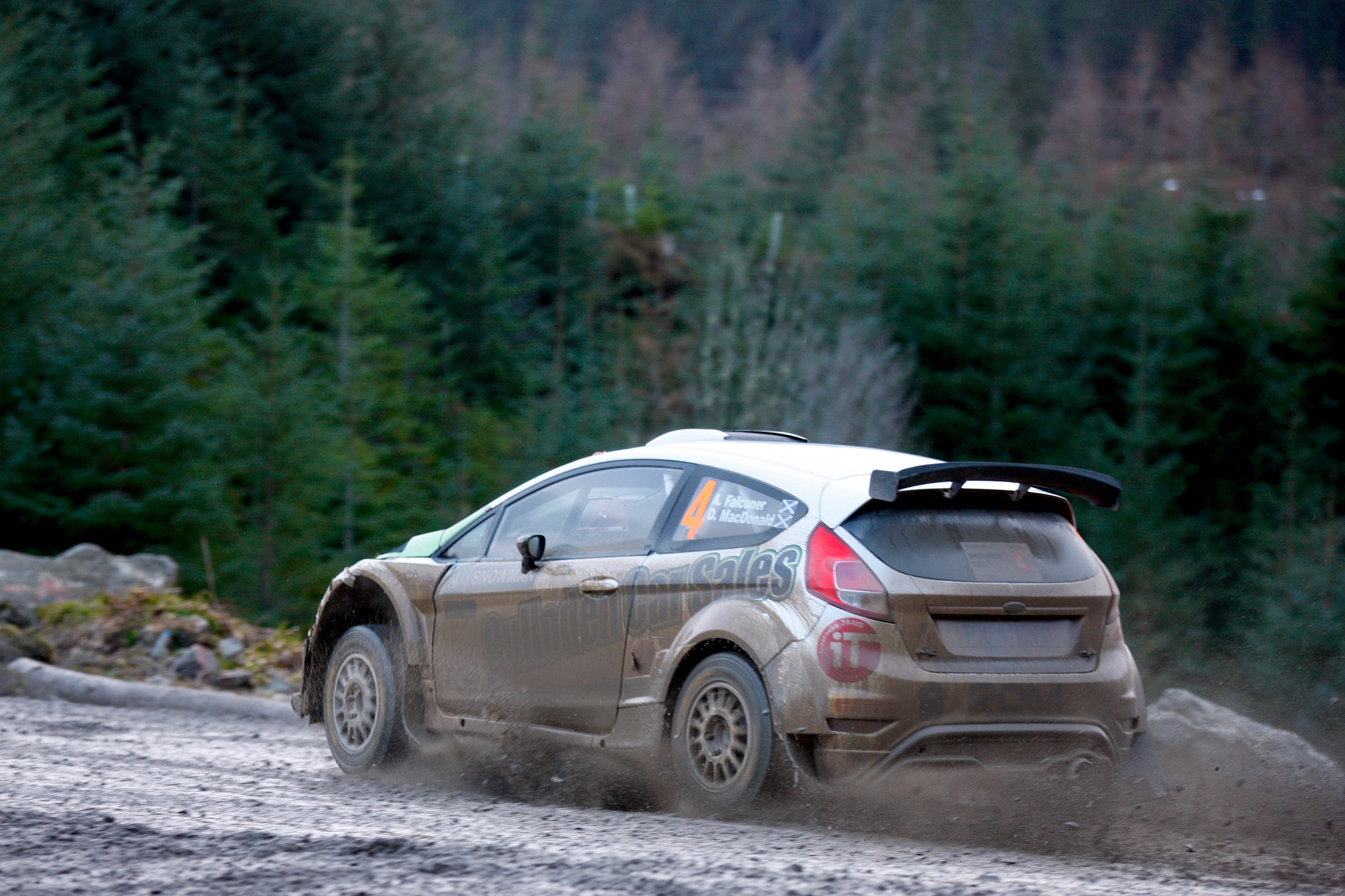 “The R5 was better in the short, twisty sections but those World Cars [of Gallacher and Milne] are so much quicker in a straight line, but it’s been a brilliant day.

“Quintin [Milne] did very well in that last one as believe you me, I was also trying my hardest.”

Reay MacKay and Keir Beaton were another crew to show strong pace. The Focus WRC pair were frequently in podium contentions, but a decision to run ice tyres backfired in SS5 when the ice melted, relegating them to fourth overall.

Clark was the big loser, falling from third to fifth in the final stage, but the Mostyn pilot was still content with a strong day behind the wheel of his older specification Mitsubishi.

John Wink and John Forrest grabbed their best ever SRC result with sixth overall as they continued to acclimatise to their Hyundai i20 R5. They were just four seconds shy of Clark’s fifth place. 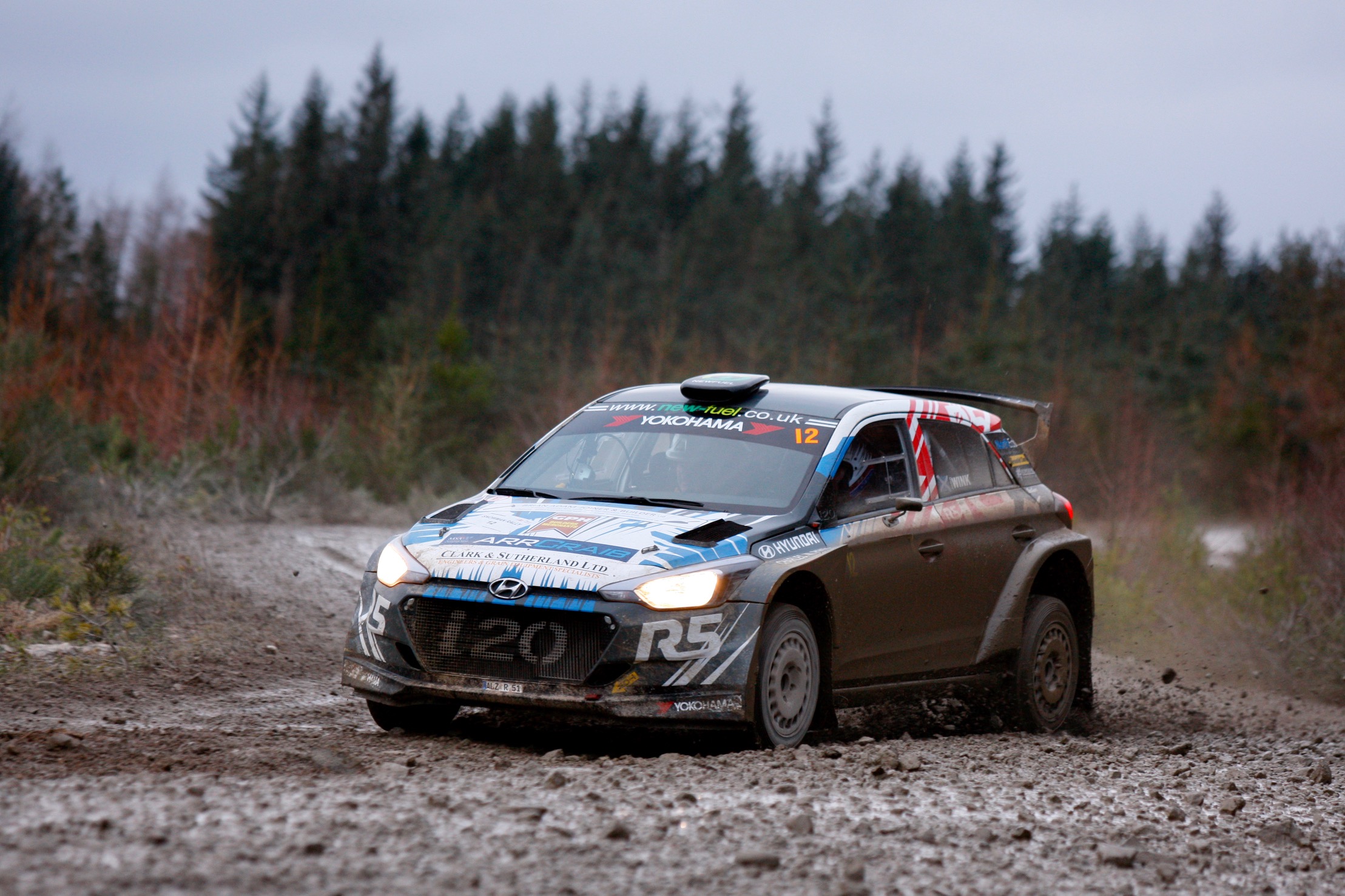 Bruce McCombie and Michael Coutts netted seventh in their Evo IX, just over a minute behind winners Gallacher and Nicol to underline the strong pace at the front of the championship.

Greg McKnight and Harry Marchbank powered their Ford Escort Mk2 into the top 10 with a fine eighth place finish in extremely challenging conditions for a two-wheel-drive car.

Ross MacDonald and Matthew Johnstone hired Donnie MacDonald’s Evo IX for the Snowman, and utilised its potential as they took ninth place, ahead of the returning Alan Dickson and co-driver Martin Forrest in an ex-Mark McCulloch Mitsubishi.

Wink and Forrest’s sixth place finish netted them the SRC Challengers win and subsequently a £250 discount on their entry to the Border Counties. MacDonald and Johnstone took second in the category ahead of Dickson and Forrest.

McKnight and Marchbank’s fine performance saw them open up an early lead in the Scottish 2WD Championship. They too will receive a discounted entry into round two. 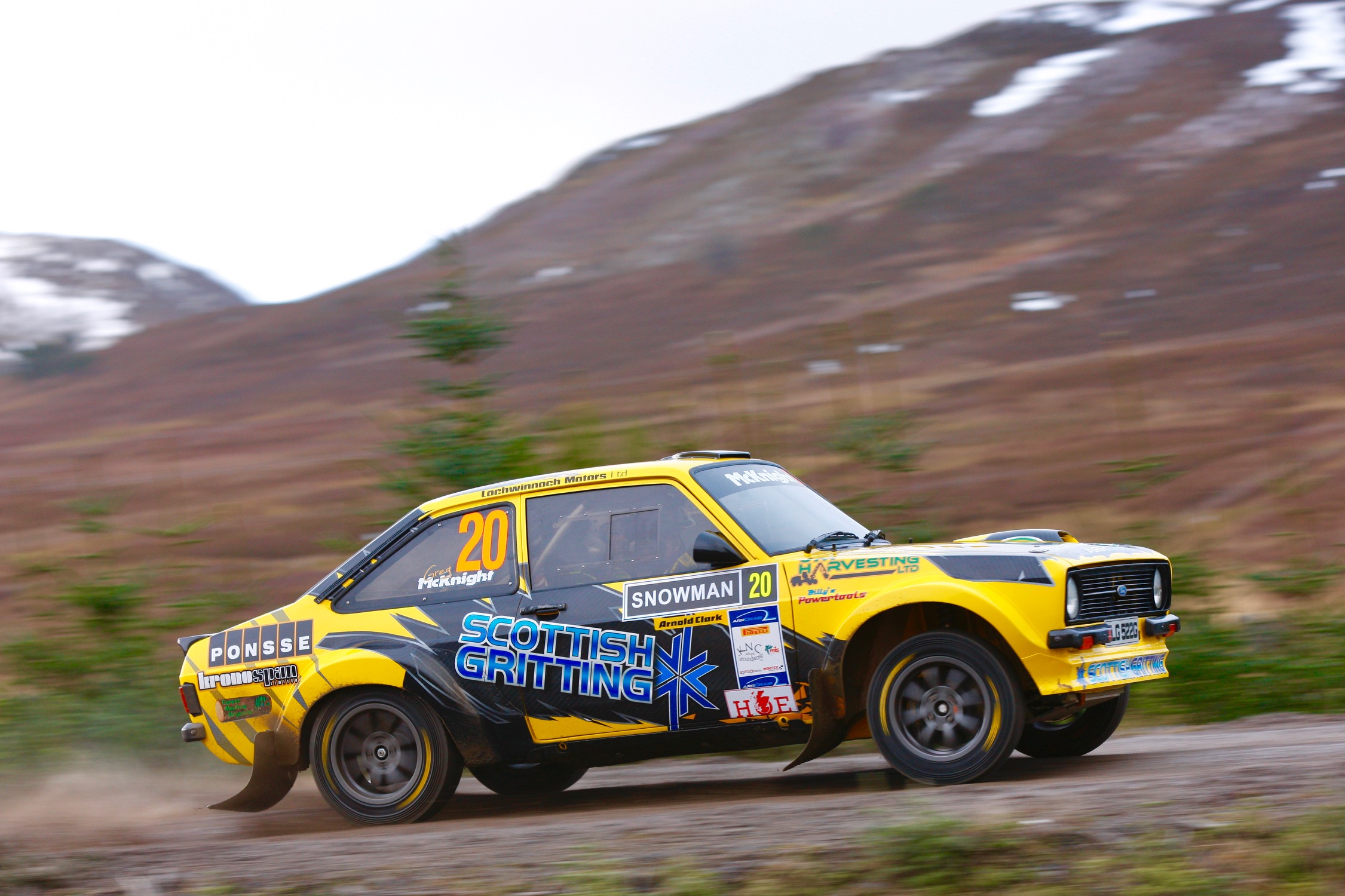 Paul McErlean and Niall McKenna made a welcome return to the SRC with second place in the category, ahead of Paddy Munro and Seamus MacLean.

The www.usedcarparts.co.uk Subaru Cup went the way of Brett MacKenzie and Lauren Murray, but only by eight seconds from Ross McFadzean and Laura Marshall. Donald Brooker and Rachel Booth grabbed third.

Pre-event favourites Mike Faulkner and Shaun Sinclair both hit trouble early on in the event.

Faulkner slid off the road in the icy conditions and rolled his Mitsubishi, while Sinclair heavily damaged the front end of his Impreza WRC with the unseen ice catching out the 2017 SRC podium finisher.

Mike Stuart’s Ford Escort Mk2 failed to start in scrutineering, ruling him out of the event before it begun, while Garry Pearson and Michael Binnie had to pull their entry with a leg and an arm injury respectively.

Once again the Snowman Rally provides an erratic start to the season with both the conditions and results being described as a “lottery” at times.

The next round of the championship heads south to the NCS Border Counties Rally in Jedburgh during March, where Gallacher and Nicol will start the event at the top of the SRC standings. 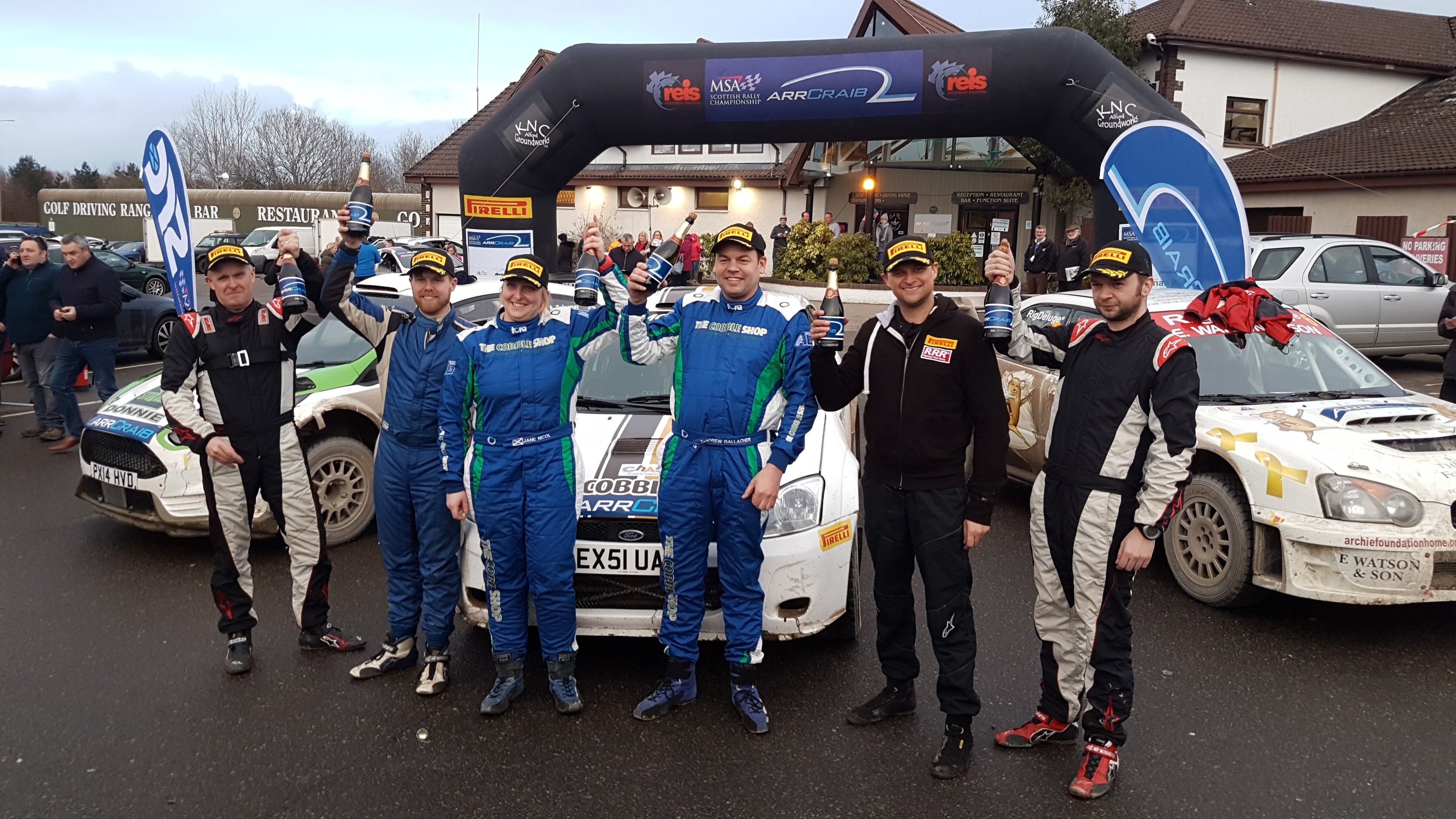