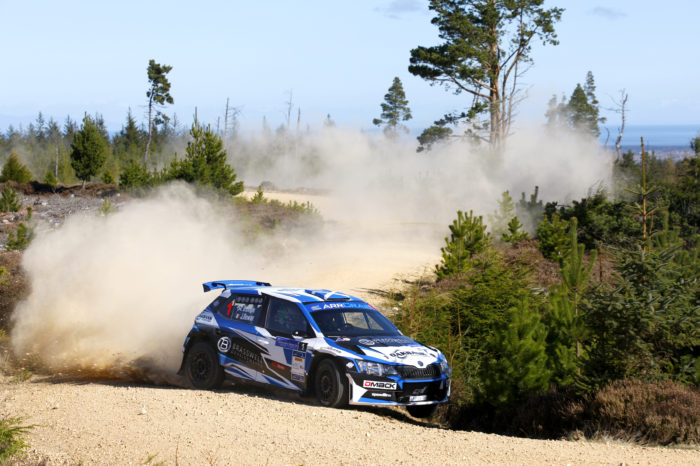 David Bogie was untouchable on round two of the 2018 ARR Craib MSA Scottish Rally Championship, winning all ten stages of the McDonald & Munro Speyside Stages this weekend in Elgin (21st April).

Nearly 100 crews took the start of the event with the unseasonably warm and dry conditions presenting a sometimes dusty challenge in the forests, vastly different to the snow and ice of the opening round in Inverness.

The event boasted an incredibly competitive top ten, but there was something inevitable about five-time Scottish Champion Bogie’s victory on an event he has made his own.

Co-driven by John Rowan, the Skoda Fabia R5 pilot set the pace through the opening Cooper Park spectator stages before flexing his muscles in the following forest tests. Such was Bogie’s dominance, he defeated his rivals by over a minute to take a record ninth Speyside Stages victory ahead of the returning Jock Armstrong’s Subaru Impreza.

Fred Milne took his Impreza WRC to third place in the SRC standings thanks to the final overall podium spot going to an unregistered Rhys Yates.

“We won all ten stages which was a nice bonus. I’m notoriously bad through Cooper Park, it’s a stage I never usually enjoy so the two fastest times through there really pushed us on and we managed to get the ten from ten.

“It’s good to support the Scottish Rally Championship so we signed on for points. We’ll more than likely be out on the Scottish as it’s our home event and we’d love to be back next year to make it ten wins on the Speyside!”

Behind the rally leader, the battle was incredibly close.

John Wink and John Forrest’s Hyundai R5 and the returning Fiesta R5 of Garry Pearson and Paula Swinscoe would prove to be Bogie’s closest challengers early on and the top seven were all separated by just eight seconds after the first forest test.

As the day wore on both Wink and Pearson fell by the wayside, with the Fiesta R5’s of Mark McCulloch, Donnie MacDonald and Lawrence Whyte all chasing Armstrong and co-driver Cameron Fair who couldn’t live with Bogie, but got the better of the rest to take a well-deserved second place.

“I haven’t been near the car since the Galloway Hills, but kept fit and tried to forget about the rallying, so to come here and finish second without a proper test is great for our championship,” Armstrong admitted.

“We didn’t have any expectations today but knew we’d be there or thereabouts, but we improved drastically throughout the day. If we get some reliability and a bit of luck, fingers crossed we should be in championship contention this year.”

Milne was out in a WRC for just the third time on the Speyside and co-driven by Patrick Walsh, gradually began to creep up the leader board as his confidence grew.

Heading into the final stage of the day just two seconds behind McCulloch, he emerged one second ahead to take his first ever Scottish Championship podium with third.

“Patrick [Walsh] kept us right all day in this beast of a car, it’s absolutely brilliant.

“I’m kicking myself now though as I used the first half of the day as a mini-test to get myself bedded back into the car as it’s tricky through low-speed corners, but we plan to be out for the full year in it, especially after today. To get this podium is a total surprise, it’ll take a while to sink in.”

McCulloch and co-driver Michael Hendry were left disappointed at missing out on the podium by a mere second, but were buoyed by the good pace they showed on just their second outing in an R5.

Two spins in the final two stages and a damaged steering arm plagued his progress.

Whyte meanwhile was far happier, grabbing fifth at the finish as he gains valuable seat time in the potent Fiesta R5. MacDonald took sixth overall in the third of the Fiesta R5s, closing Andrew Gallacher’s championship lead to just one point in the process.

Bruce McCombie and Michael Coutts were first Mitsubishi crew home with seventh in their Evo IX, ahead of Snowman winners Gallacher and Jane Nicol who spent the day playing catch-up in their Focus WRC after two stalls and a spin in Cooper Park.

Martin Scott and Daniel Forsyth netted a fine ninth overall on Scott’s first outing in an Evo IX, with the similar car of Scott McCombie and Mark Fisher completing the top ten.

After dominating the Scottish 2WD Championship on round one, Greg McKnight made it two wins from two in his Ford Escort Mk2 after a fine run to 13th overall.

Duncan MacDonald and Neil Ross claimed second in their less powerful Escort, with Paul McErlean and Niall McKenna making it three Escorts on the podium with third.

Lawrence Whyte’s run to fifth place also saw him scoop up the SRC Challengers honours for drivers with no more than one top ten finish in the last decade.

The Fiesta R5 man beat Martin Scott to the honours, with Brian Watson claiming third on his gravel debut in a Subaru Impreza S11 WRC.

After the disappointment of rolling on the Snowman, Alasdair Currie bounced back with a win in the Juniors in his Ford Fiesta ST. Grant MacRae took second in a similar car with Tom Howie completing the podium in a Talbot Sunbeam.

The attention now switches to the RSAC Scottish Rally on Saturday 19th May. With the championship finely poised, the event promises to be as unpredictable as the opening two rounds of the season.