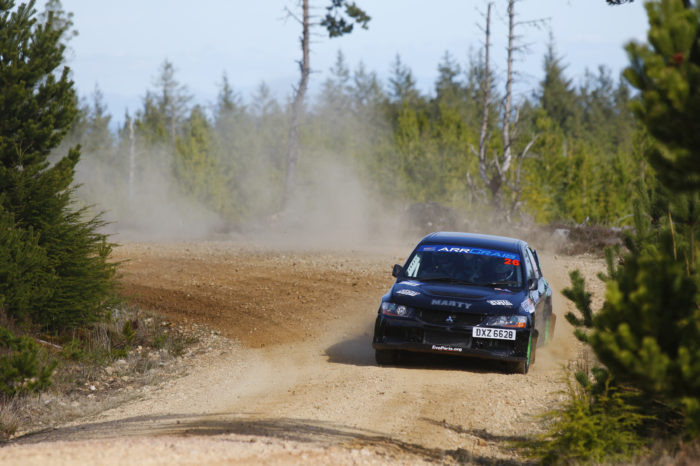 Martin Scott’s drive to 10th overall on the second round of the 2018 ARR Craib MSA Scottish Rally Championship (SRC) caught everybody’s eye, with his performance netting him the second SRC John Horton Star Driver Award of the season.

Co-driven by Daniel Forsyth, Scott dominated Class 9 in his Mitsubishi Evo IX on the McDonald & Munro Speyside Stages, and will now join Paddy Munro in the end of season shootout to win a day’s tuition with Finnish rally legend Tapio Laukkanen.

Scott’s drive was all the more remarkable given the length of time he had been out of competition, but there were dramas before the rally even began.

“We blew the gearbox during our small test meaning we were chasing our tail to even make the event,” Scott revealed.

“I hadn’t sat in a rally car for 18 months so the event was purely about seat time. We set off with a plan to get through the morning and then have a big push through Gartly Moor [SS6 & 8] and Balloch [SS7 & 9].
“Gartly is in my opinion the best stage in Scotland so we knew we could make up time in there, and we came out of Balloch in the class lead by over a minute so we just preserved it from there.”

With so little recent SRC experience, the cousin of Bruce and Scott McCombie never expected to receive a prize as prestigious as the Star Driver Award.

“To be honest I try not to be put too much pressure on myself so this award was never on my radar,” Scott said.

“To pick it up on my rallying return though is special. When you look at some of the top SRC drivers who have received this in the past it means a lot to me. If I was fortunate enough to win the test with Tapio Laukkanen, it would be an amazing experience that would improve my driving immensely.”

Despite such an amazing performance on the Speyside, work commitments will prevent Scott from completing the full rest of the season. However he is confident he can improve still and show everybody what he can do behind the wheel.

“My rallying is restricted to the fact I work in Egypt, so the plan now is to compete on the Scottish and the Grampian and then take it from there. There is still a lot to come from the car which I’m hoping to show over the coming events.”

Martin Scott was not the only driver to pick up silverware in Elgin however.

Scott Peacock and Robin Neil took the Class 1 spoils in their MG ZR finishing 46th overall. However there was drama for the sister car of Snowman winners Niall Cowan Jr and Thomas Bruce who retired after SS9 with engine troubles, while Steven Crockett and Martin Henderson suffered a similar fate at the end of the final stage in their Peugeot 205. 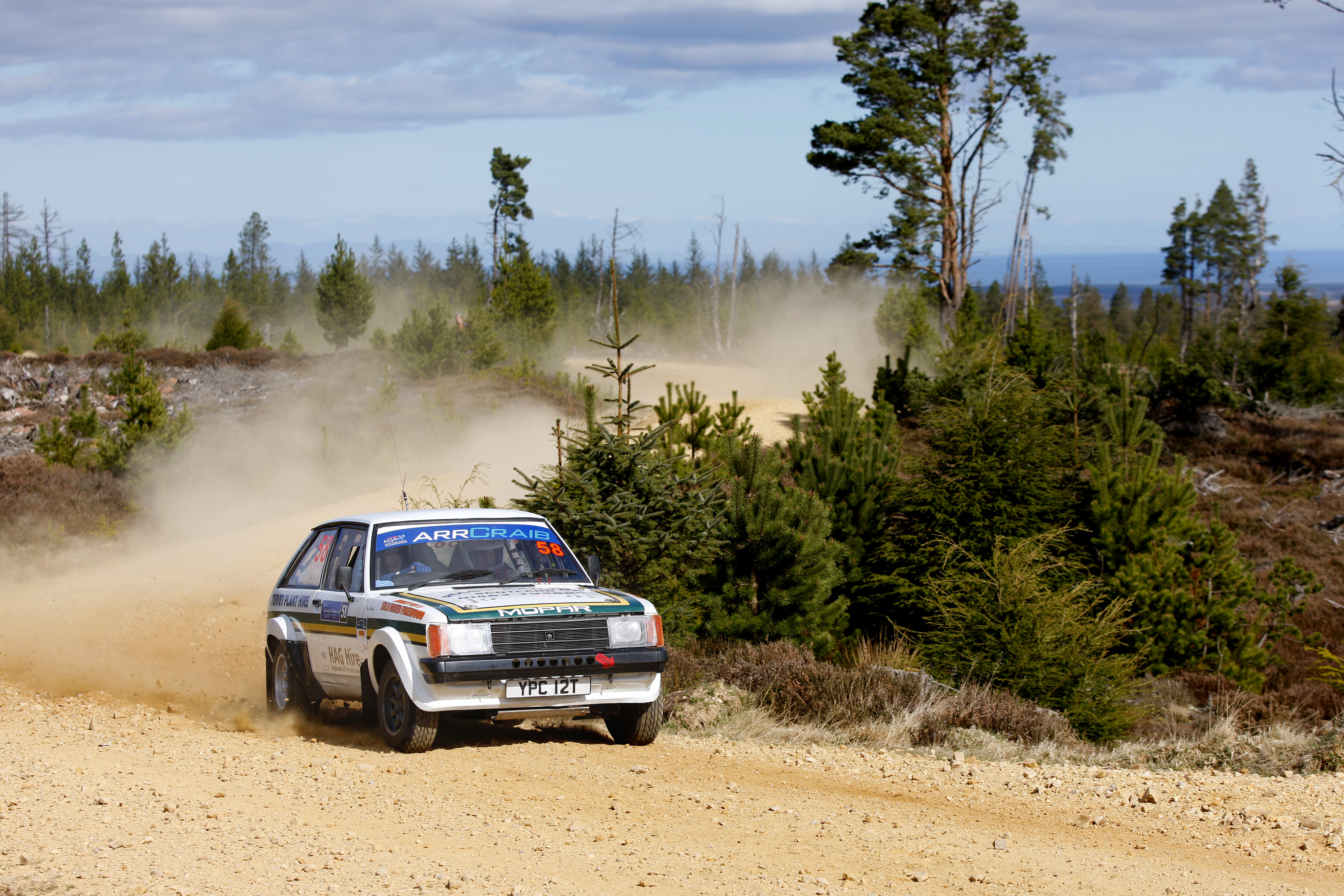 Class 2 was won by Tom Howie and Charles MacKenzie in their Talbot Sunbeam, going one better than their second place on the Snowman Rally. Jamie Stewart and Kevin Mollison scored second behind the wheel of their Peugeot 205 with Chris Baillie and Allen Cowe completing the class podium in their similar machine.

Ross Hughes and Richard Crozier took the Class 3 win in their Citroen C2 VTS ahead of the Honda Civic of Neil Redford and Duncan Daun. Ian and Lisa Cattanach steered their Talbot Sunbeam to third in class and 48th at the finish with class favourites Keith Riddick (MG ZR) and Neil Coalter (Ford Puma) both retiring after SS7.

Fraser MacNicol and Keith Boa scored their first class victory of the year equipped with their Ford Escort Mk2. The Class 4 rostrum was completed by Jim Robertson and Mike Curry and John and Meghan O’Kane, both crews in Escort Mk2s.

Alasdair Currie and Grant MacNiven took the Class 6 win in their Ford Fiesta ST, defeating the similar car of Grant MacRae and Martin Bruce by over a minute. Scott Burness and Andrew Forbes made it an all-Fiesta top three.

Duncan MacDonald and Neil Ross won Class 7 in their Ford Escort Mk2, making it into the top 20 overall with 17th. Paul McErlean and Niall McKenna made the trip over from Ireland to take second in their Mk2, ahead of Willie Stuart and Peter Carstairs who were using Stuart’s son Mike’s Escort for this event. 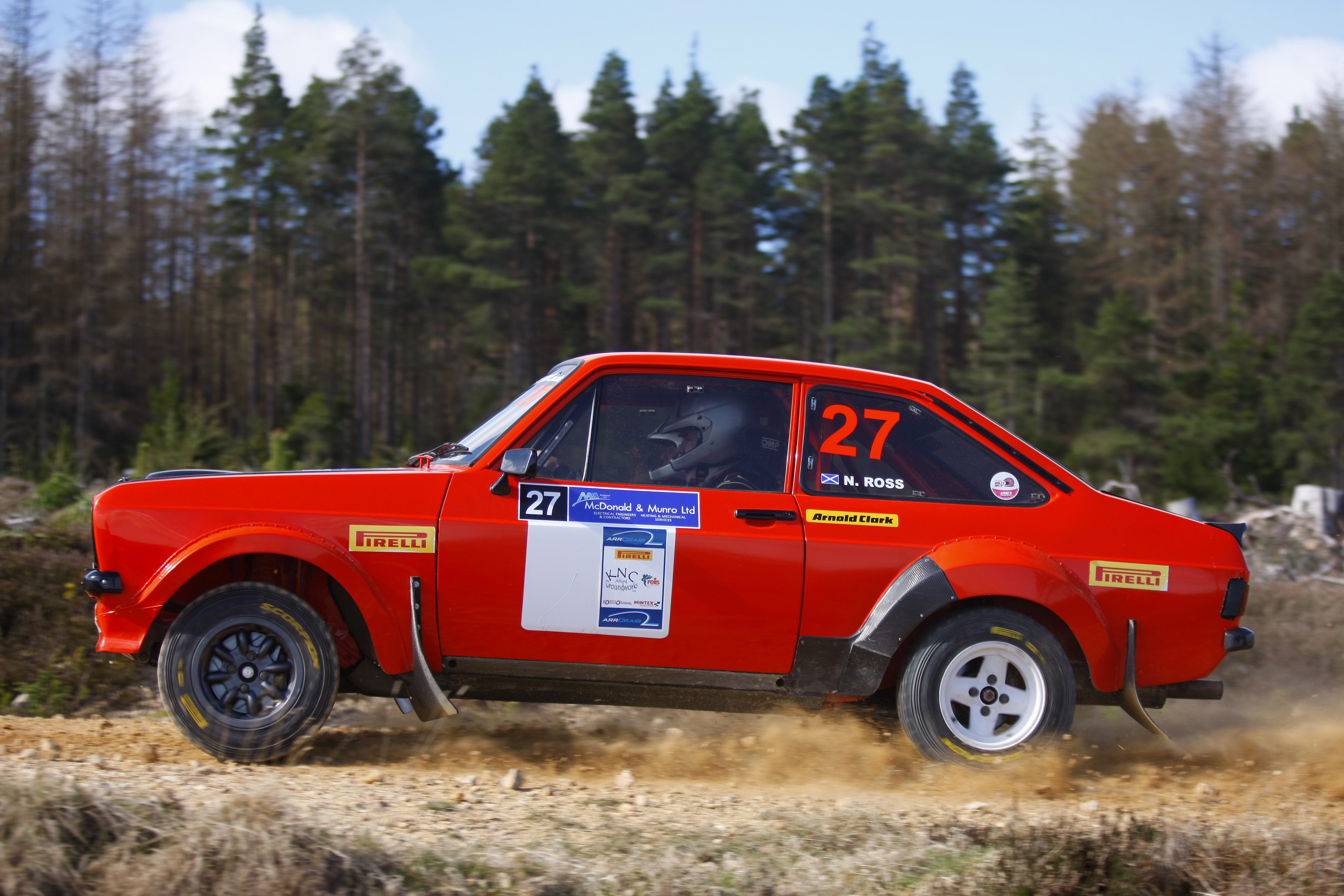 Greg McKnight and Harry Marchbank made it two Class 8 wins from two with their Ford Escort Mk2, three minutes ahead of Gordon Murray and David O’Brien’s similar example. Charles Stewart and David Law were third in class in their unique BMW 318 Compact.

Martin Scott and Daniel Forsyth won Class 9 in their Mitsubishi Evo IX with 10th place overall, ahead of Michael Binnie and Claire Mole in another Lancer Evo IX. Ian Baumgart and Dave Robson made sure Subaru was represented on the class podium with third.

Jock Armstrong and Cameron Fair muscled their Subaru Impreza into second overall, netting the Class 10 spoils in the process. Bruce McCombie and Michael Coutts grabbed second in their Evo IX, beating Scott McCombie and Mark Fisher by just over a minute.

David Bogie and John Rowan were Class 11 winners in their Skoda Fabia R5 after finishing a minute ahead of the chasing pack in first overall. Freddie Milne and Patrick Walsh were second in their Subaru Impreza WRC S12B, just one second in front of Mark McCulloch and Michael Hendry’s Ford Fiesta R5 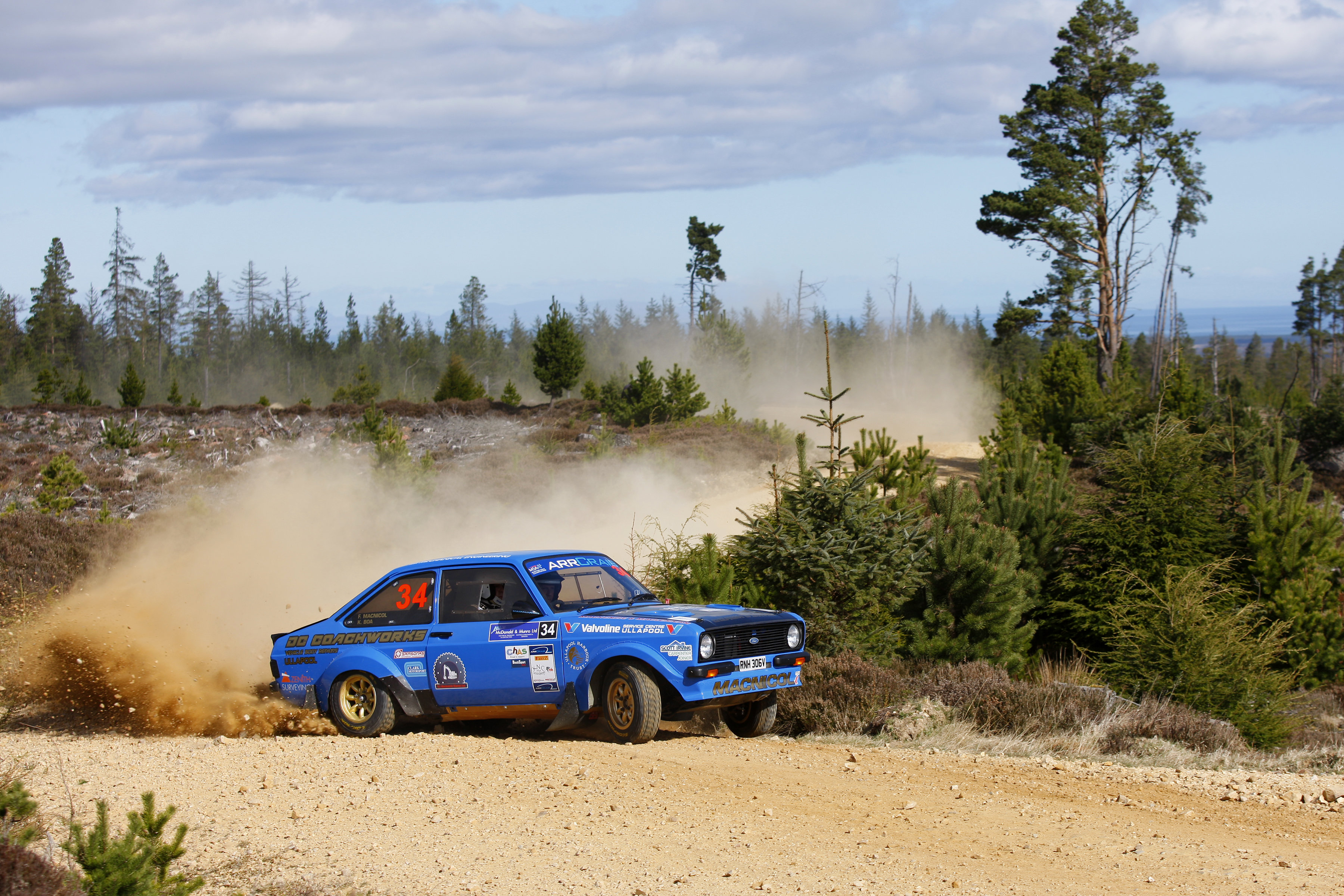 MacNicol on his way to the Class 4 victory – Image: Lindsay Photo Sport