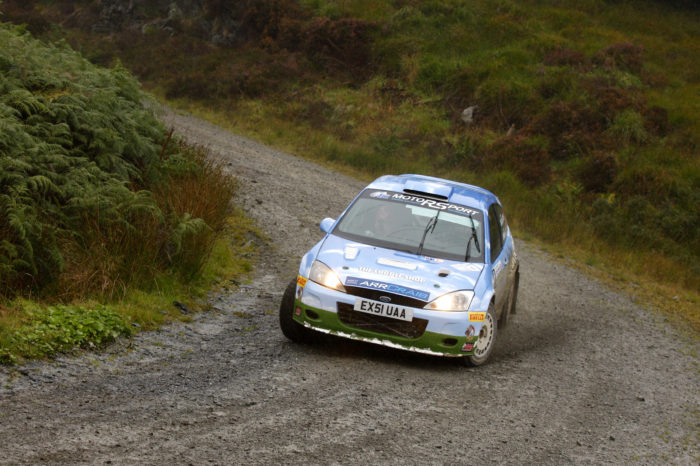 Andrew Gallacher has been crowned the 2018 ARR Craib MSA Scottish Rally Champion after seeing off the challenge from title rival Donnie MacDonald on the final event of the season, the Armstrong Galloway Hills Rally.

Both drivers started the rally prepared for a big fight, but a mistake from MacDonald early in stage one defused the battle. Just half a mile into the test, MacDonald slid his Ford Fiesta R5+ wide into a ditch, with a rock sending the car back across the road and into retirement.

MacDonald’s error instantly handed the title to Gallacher, alleviating the pressure from his shoulders and allowing him to replicate his father’s four SRC titles. With 2018 marking the SRC’s 50th anniversary, 10% of all Scottish Rally Championships have now been won by a Gallacher.

“It still hasn’t really sunk in yet,” Gallacher admitted.

“It’s been a strange day because we knew it was ours, but there was still a chance Donnie could have taken it but here we are now, we’ve got it sealed.

“It’s great to replicate what my dad [Drew Gallacher] did, and it’s great that had landed on the 50th anniversary of the championship. We’ve not really done many full seasons so it’s nice that this year we’ve turned up and managed to create this bit of history.”

Held in the Galloway Forest Park, the Galloway Hills Rally took in over 40 competitive miles with classic tests such as Black Loch and Glentrool standing in the way of the SRC field. Heavy rain in the morning did its best to deter the competitors, but it wouldn’t faze David Bogie and co-driver John Rowan who blasted to all five stage victories to win the event by 45 seconds in their brand new Skoda Fabia R5.

“It was a great rally with great stages, and was ideal preparation for Rally GB next month,” Bogie enthused.

“The new car has a slightly different engine. There’s a bit more torque mid-range so this was an excellent shakedown today, the car feels good and its set-up nicely.

“We had good competition so really the rally, and for it to start as wet as it was and for it to finish dry really mixed it up which made it even more enjoyable. John was great, the tyres were great so it was one of those perfect days.” 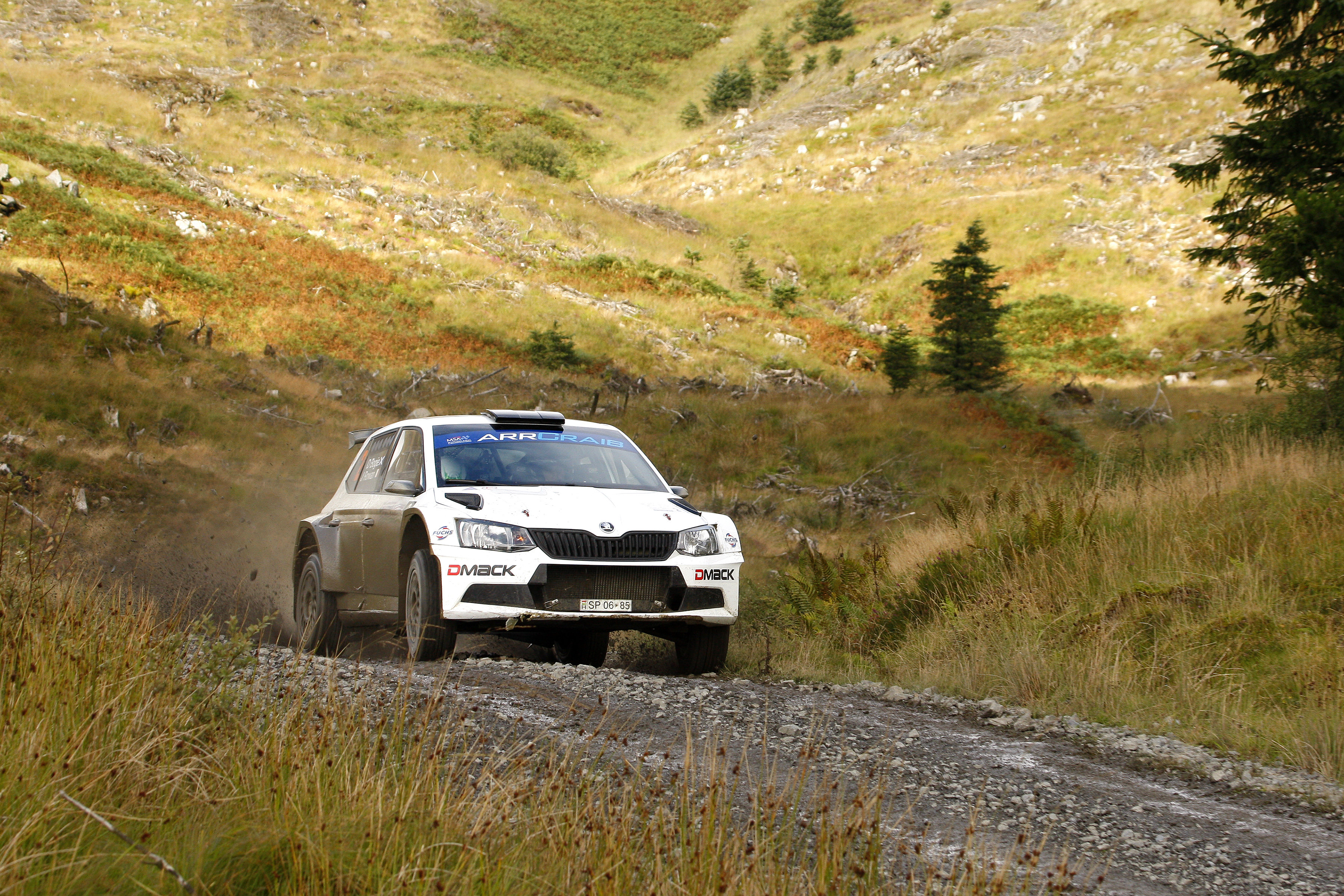 Behind the dominant Bogie, Garry Pearson and co-driver Dale Bowen were busy proving why they could be ones to watch next year in their Ford Fiesta R5. Finishing second best to Bogie on three of the tests and third on the remaining two, the Duns driver found a good rhythm in Castle Douglas that assured him of second overall ahead of the unregistered Jonny Greer and Liam Regan.

“It’s been a good day but it wasn’t easy out there,” Pearson said.

“This has to be a good solid building step for next year so we can’t complain. The plan has always been to plan on next year so we will just see where we end up. A result like this certainly helps the confidence.” 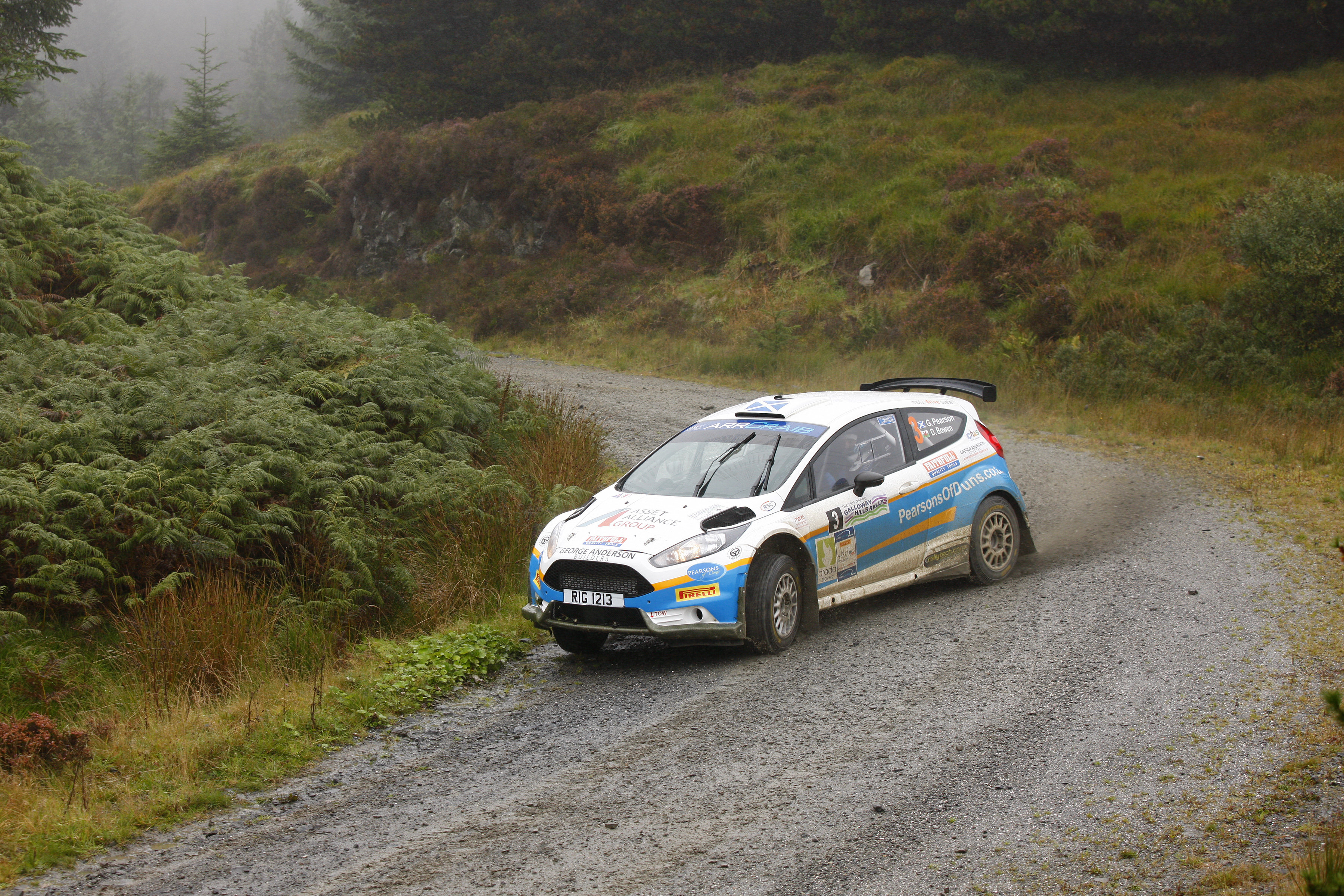 Just over a year on from his debut in the Hyundai i20 R5, John Wink secured his best ever result with third in the SRC after setting a string of top five stage times. Partnered with newly crowned BTRDA driver’s champion Matt Edwards on this event, Wink pipped event sponsor and double Scottish champion Jock Armstrong to third place by just three seconds in what was a very close fight.

“This is just the best day ever,” Wink beamed.

“When I got my seeding through at 14th I thought that’s where I should be, but we set a good time in stage one and just built on it from there.

“Matt [Edwards] has been excellent on the notes today, keeping me in check and telling me where I should or shouldn’t push, so it’s been hugely beneficial having someone of his experience alongside me.” 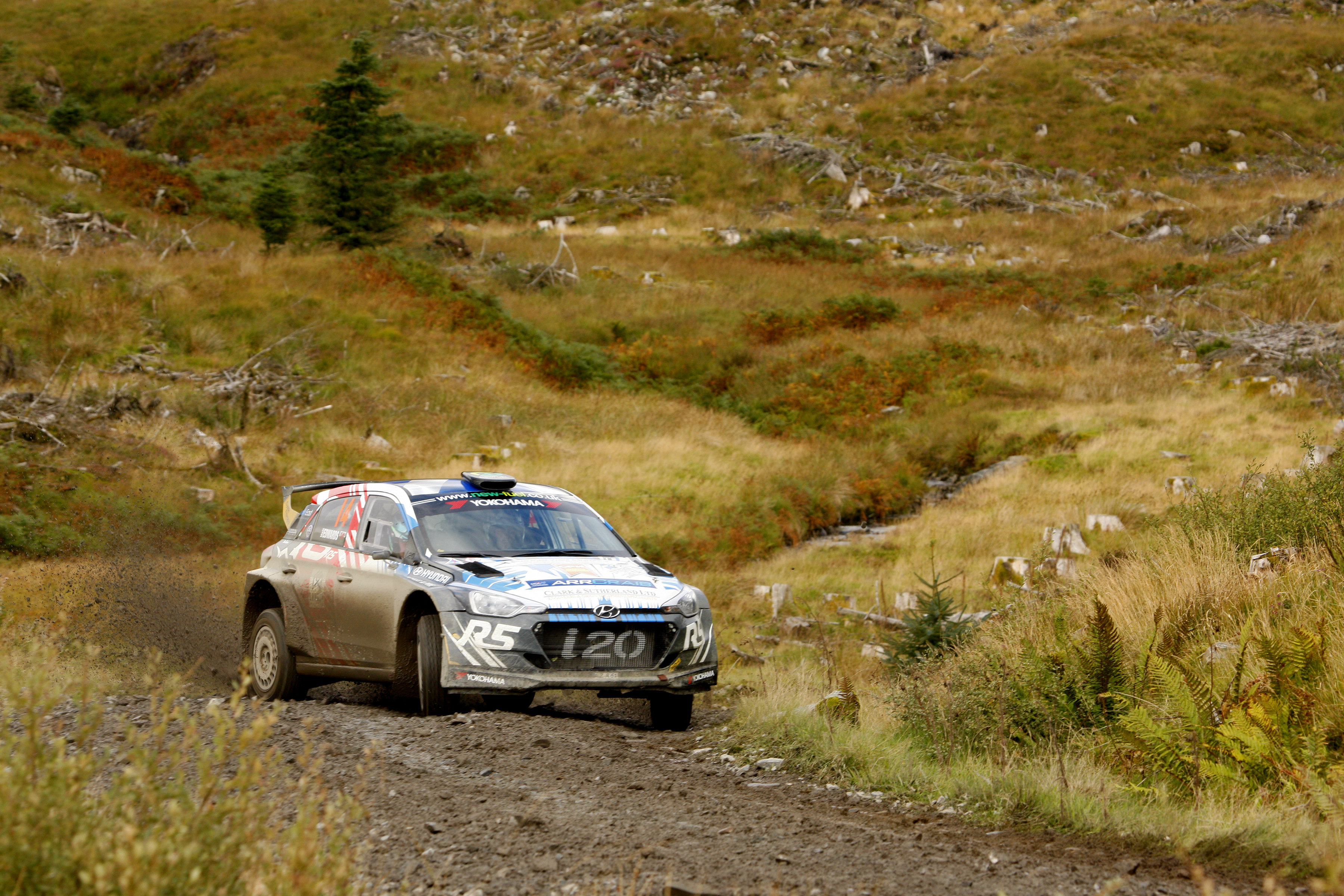 Armstrong and co-driver Cameron Fair won this event 12 months ago but had to settle for fourth in their Subaru Impreza with a misted-up windscreen in the morning rain hampering their charge. Fred Milne and Patrick Walsh faced a similar problem in their Impreza WRC while also picking up a puncture in SS4, meaning they rounded out their season with fifth place.

McKnight and Marchbank’s ninth overall saw them take the Scottish 2WD Championship on the event, capping off a superb season with another victory. Keith Riddick and Steven Clark took second in the category in their MG ZR, with Finlay Retson and Tom Hynd completing the podium in their Ford Fiesta R2. 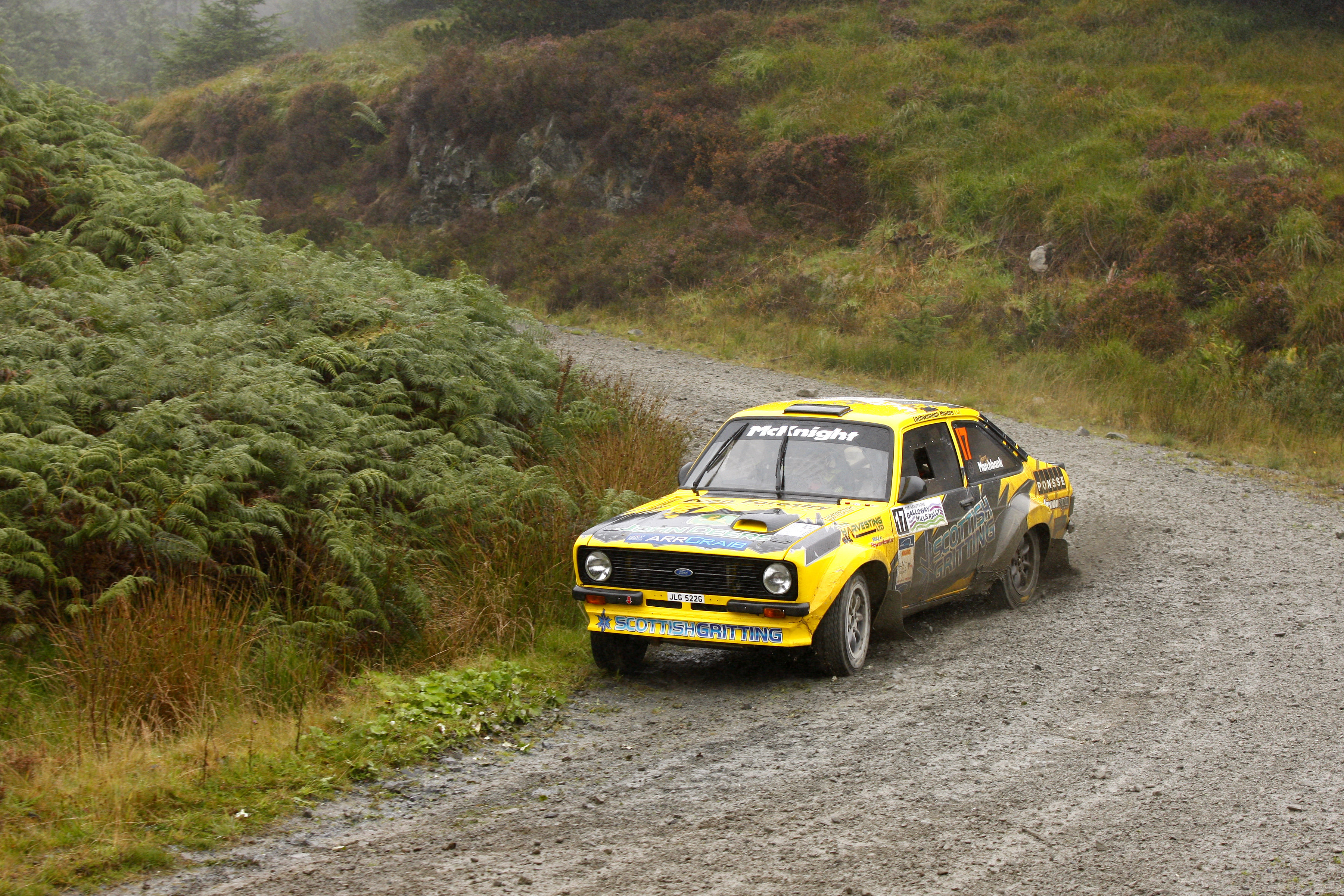 John Wink scooped up the SRC Challengers title by winning the category on the Galloway Hills ahead of Keith Morris and Alan Dickson.

Niall Cowan Jr emerged as the new Scottish Junior Rally Champion with a consistent drive in his MG ZR. Title rival Alasdair Currie retired his Ford Fiesta ST after stage one, meaning a good finish would assure Cowan Jr the title. Retson won the category on the rally ahead of Grant MacRae (Ford Fiesta ST) and Scott Sloan (Peugeot 208 R2).

The 2018 ARR Craib MSA Scottish Rally Championship has now reached its conclusion, with another fiercely competitive rally rounding out the season. Andrew Gallacher and Jane Nicol are the new champions and deservedly so, taking two victories on their way to a popular title win. 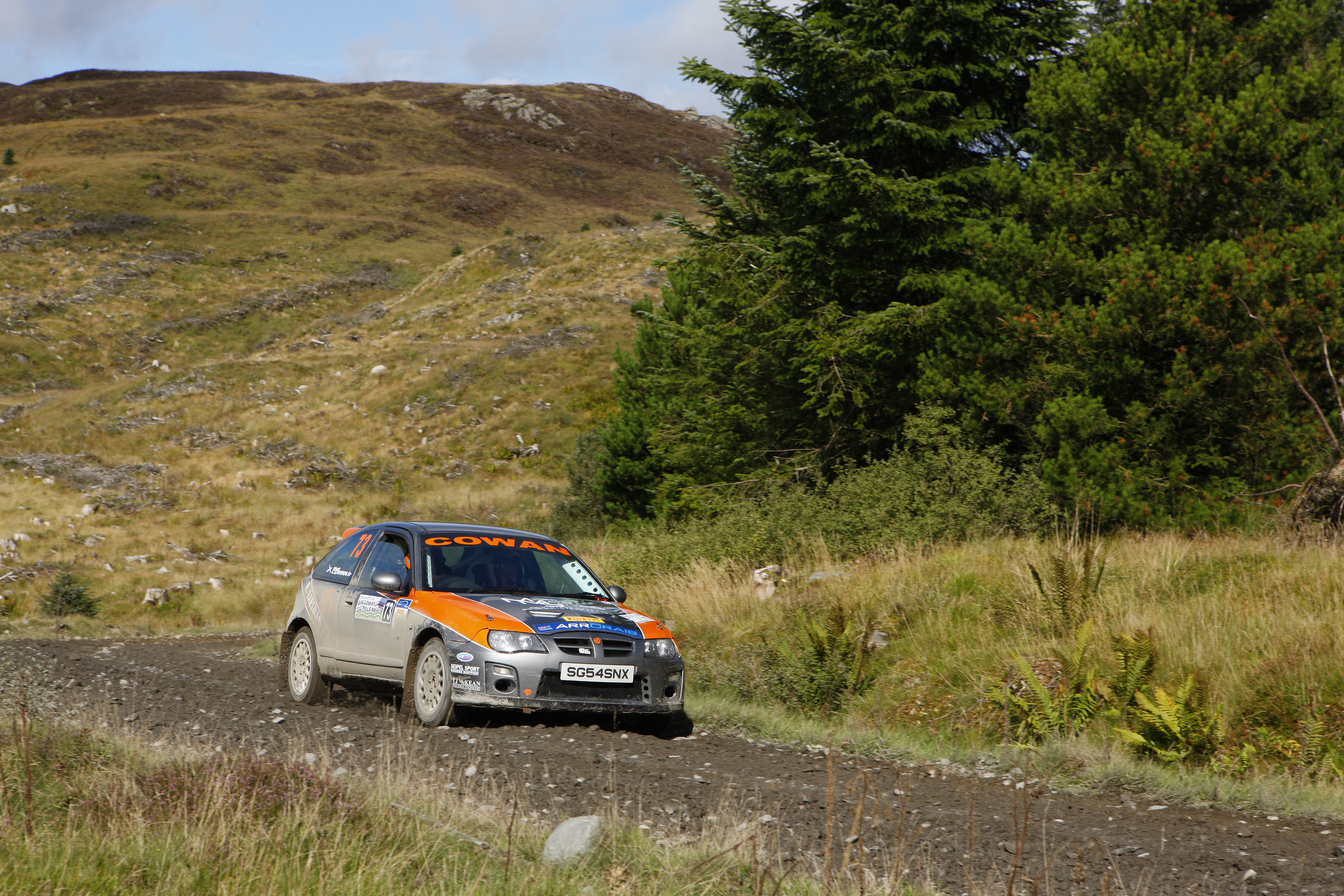 Cowan Jr takes Junior title and the prizes that go with it – Image: Lindsay Photo Sport