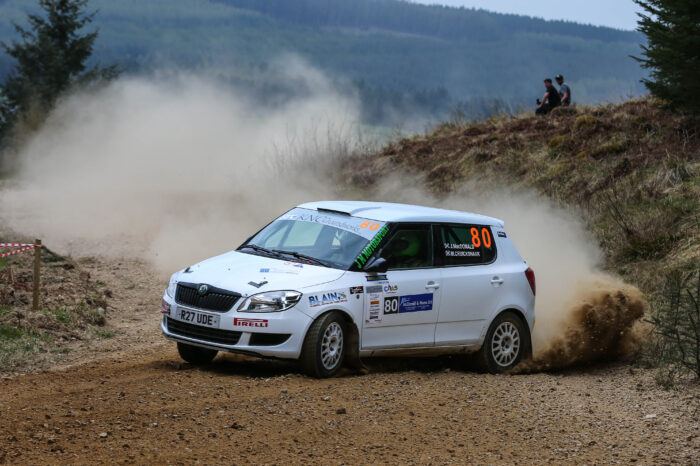 Rising youngster Jude MacDonald was presented with the second KNC Groundworks SRC John Horton Star Driver Award of the season after a stellar performance on round two of the series, the McDonald & Munro Speyside Stages.

On just his second gravel rally in his Skoda Fabia R2, the recent Junior 1000 Ecosse graduate stormed to 23rd overall and first in class, improving 57 places on his seeding in the process.

MacDonald’s sheer speed and composure that stretched beyond his years was enough for him to be awarded the SRC John Horton Star Driver, seeing off Matthew Thomson and Mark McCulloch to the Speyside prize.

MacDonald will now join Scott MacBeth in an end-of-season shoot-out where drivers will compete for a full day of driving tuition with a renowned rally pilot.

“This is a great way for us to comeback after 18 months of misery,” said a delighted MacDonald.

“Before the event I didn’t think this was a possibility, I wasn’t even expecting a result let alone the award. It took me by surprise, but now that things are looking up I’m hopeful for this year now from a championship point of view.

“We retired from the Border [Counties] as we couldn’t see where we were going due to a broken demister, so this was our first proper shot at a rally with no issues.

“We sat and did our own pace all day to make sure we got the finish that we’ve been needing for so long. There wasn’t a plan to go and win anything but our pace just sort of developed without pushing too hard, which is really promising for the future.”

MacDonald has only started three events in the Fabia R2, with just one outing last year at Knockhill in 2018 his only outing prior to his maiden SRC campaign.

“Our plan for this year is not about results, it’s about finishing. It’s a learning year to gain experience under our belts, but if we do start getting good results we’ll never discount our hopes for a championship.

“I’m starting to get a bit more comfortable with the car. It is a bit of an animal, you need to grab it by the scruff of the neck but it’s rewarding, you do get it back. At the start of the Speyside it took me a couple of stages to find the rhythm again, as it’s a challenging car to drive.”

MacDonald was one of several class winners up in Elgin, with the SRC classes once again proving the strength in depth of the championship. 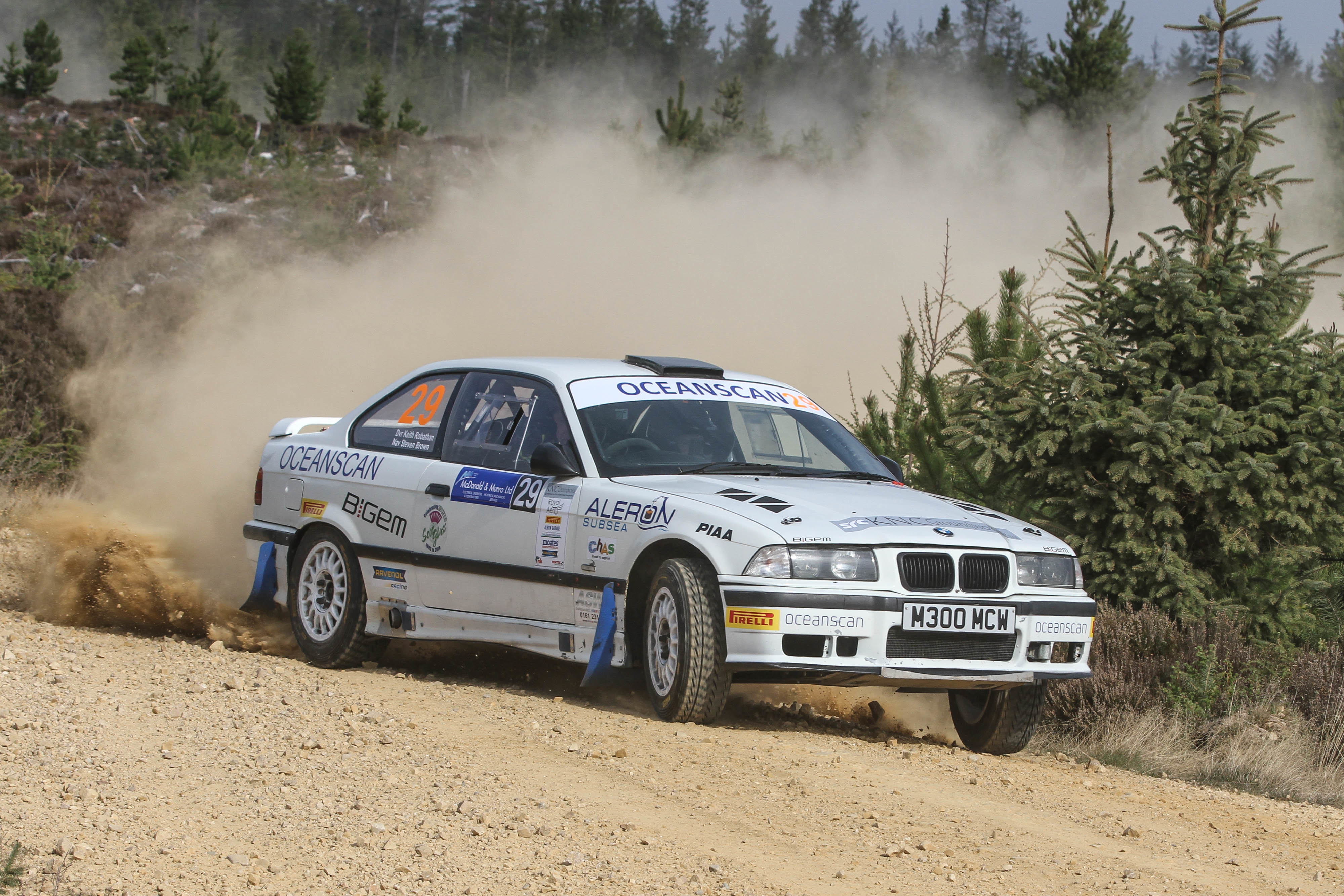 Class 1: Scott Peacock and Robin Neil took the class win, getting the better of MG ZR rivals Niall Cowan Jr and Thomas Bruce after losing to them on round one. Neil Coalter and Hannah Cessford’s return in their Suzuki Ignis ended with a broken crack sensor.Class 2: James Campbell and Kenny Foggo took a dominant victory behind the wheel of their Talbot Sunbeam, claiming 29th overall. 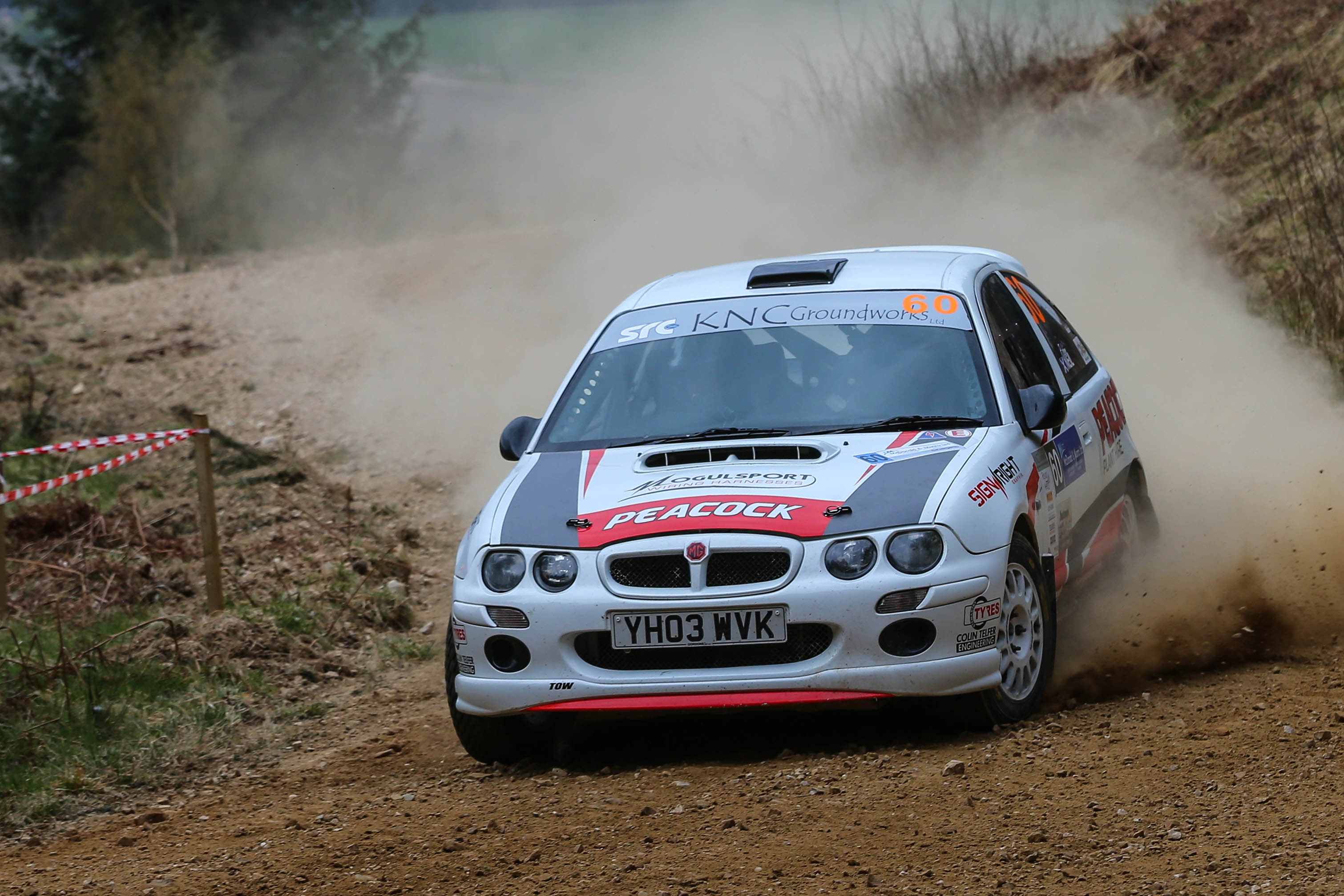 Class 4: John and Meghan O’Kane headed the class in their Ford Escort Mk2. Class favourites Paddy Munro, Fraser MacNicol and Douglas Watt all failed to return to Elgin for the finish.

Class 5: Tom Coughtrie and Ian Fraser took their Mitsubishi Galant to the historic class spoils. Ian and Dawn Milne scored second in their Ford Escort Mk2, while Ernie Lee’s day ended dramatically as a wheel fell off his BMW in Cooper Park.

Class 6: Carl and Rob Tuer made it two from two for the season in their Suzuki Swift, on their first visit to the Speyside Stages. Linzi Henderson and Tom Hynd’s Ford Fiesta R2T was second, from Johnnie MacKay and Andrew Logan’s Ford Fiesta ST. 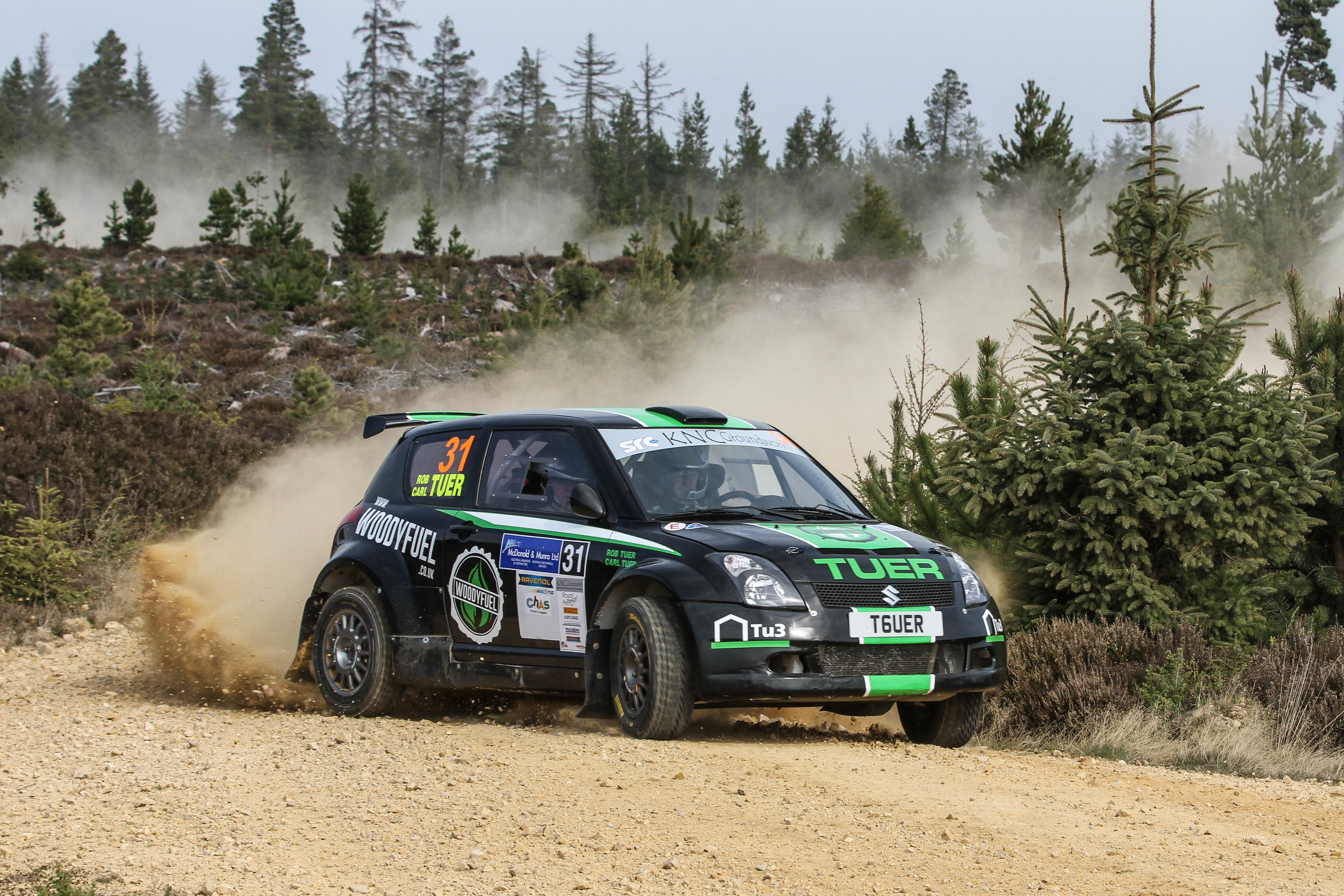 Class 7: Duncan MacDonald and Neil Ross took a superb 13th overall on their way to class victory. The Escort Mk2 crew took the spoils from the sister car of Paul McErlean and Aaron Mawhinney. Alistair Brearley and Paul Barbet were the final Escort on the class podium with third.

Class 8: Keith Robathan and Steven Brown were class winners in their BMW M3, ahead of rear-wheel-drive newcomers Mark McCulloch and Michael Hendry. Gordon Murray and David O’Brien were the top Escort in third.

Class 9: Michael Binnie and Claire Mole missed out on an overall podium by five seconds, but did take the class win in their Mitsubishi Evo IX. The similar cars of Thomas Gray / Harry Marchbank and Martin Scott / Daniel Forsyth completed the podium. 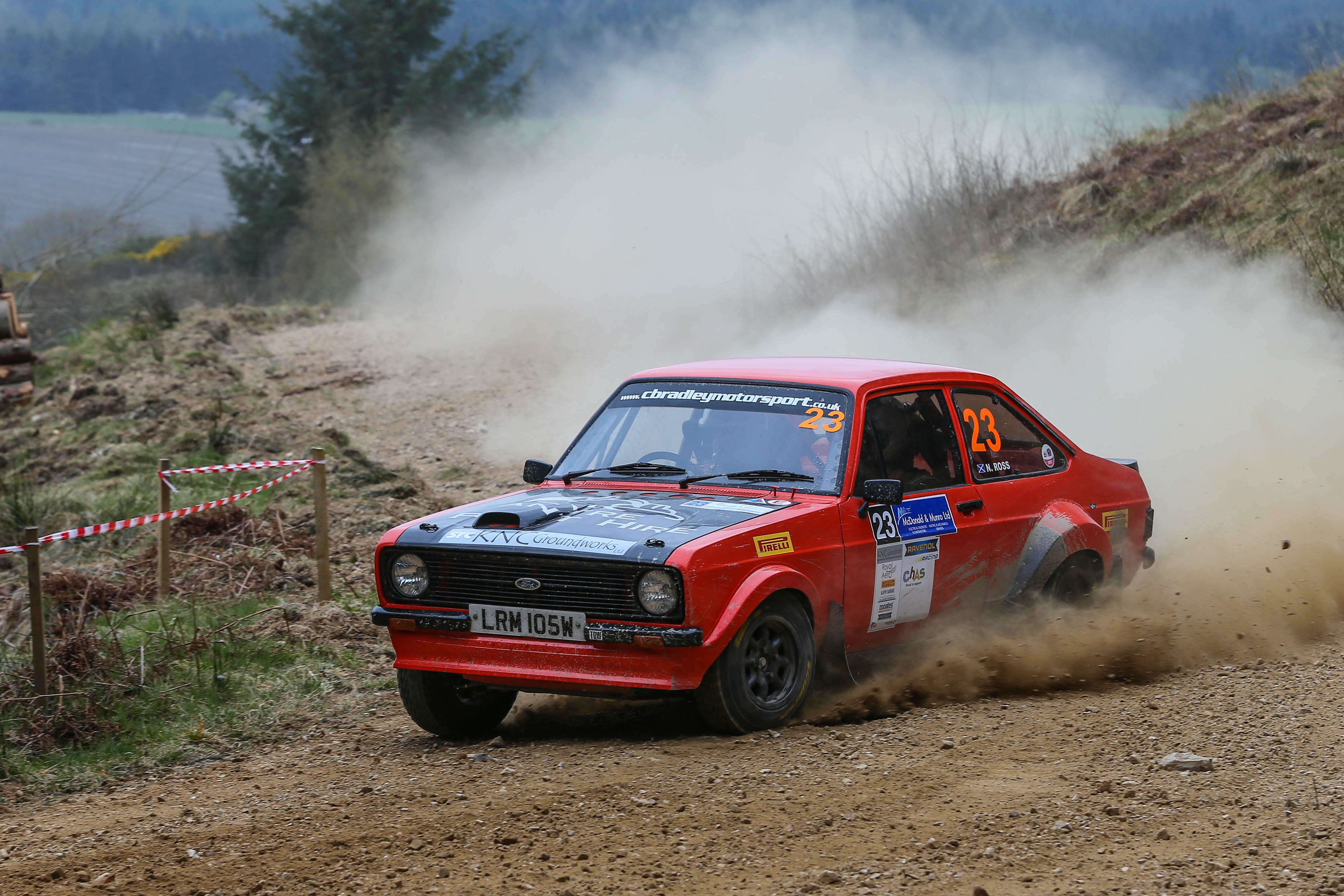 Class 10: Jock Armstrong and Cameron Fair were class victors as well as second overall in their Subaru Impreza, ahead of Freddie Milne and Patrick Walsh’s Mitsubishi Evo VII. Chris Collie and Gary McDonald were third in another Mitsubishi.

Class 11: Euan Thorburn and Paul Beaton bagged their second class win of the year to complement their overall rally win. John Wink and John Forrest finished second in their Hyundai i20 R5, with the Ford Focus WRC of Bruce McCombie and Michael Coutts sealing third.

The next round of the series is the RSAC Scottish Rally on Saturday 19th May.

Based in Lockerbie, the event starts and finishes in the nearby town of Moffat and comprises of 45 stage miles including infamous special stages such as Twiglees, Castle O’er and Ae.