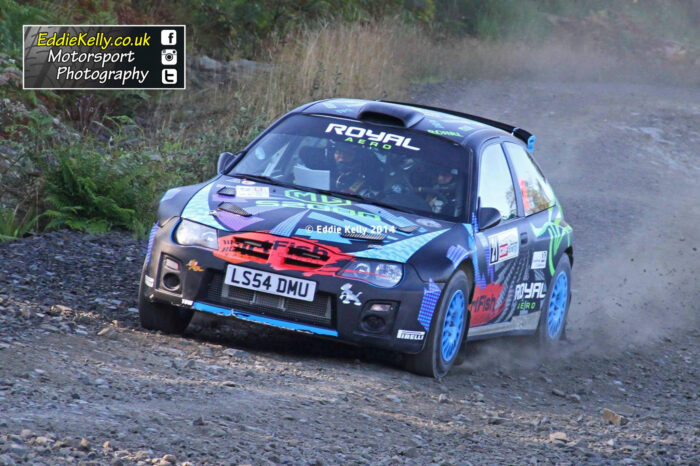 KNC Groundworks Scottish Rally Championship (SRC) live coverage sponsor Calum MacLeod will return to the series for the first time since 2016 with an entry into next week’s Grampian Forest Rally (Saturday 9th August).

MacLeod’s Royal Aero firm joined the SRC as the live media coverage sponsor at the start of the year as the series ramped up its live coverage to both in-stage action and end-of-stage interviews.

The tireless work of the championship’s media partners Beck Sport Media and MCR Motorsport Media have made this transition possible, and MacLeod is delighted with what he has seen from back home in Germany.

“I am very happy with the developments over the season and the excellent coverage provided,” he said.

“The end-of-stage interviews and live timing calculations by the interviewers are really interesting for the class leaders and the viewers, as it adds some perspective to the event.

“As someone who rarely gets to come across to a Scottish event I enjoy the live coverage enormously and I appreciate the efforts of the team, who must go to extreme lengths to obtain signal coverage and handle the changeable conditions.

“For me it’s all about supporting the organisers and competitors, much more than the advertising as we have no customers in Scotland. It is great to see the SRC at the cutting edge of live forest rallying in the UK and perhaps with the wider internet audience, you never know, perhaps a customer may identify with Royal Aero.”

MacLeod hasn’t rallied properly since 2014; his most recent event a one-off appearance on the McDonald & Munro Speyside Stages three years ago.

But MacLeod owns one of the most unique and intriguing cars in the country: an MG ZR S2000.

“Despite being parked the MG S2000 has had a few improvements carried out since 2016, with a few tweaks on SRC champion Andrew Gallacher’s rolling road and with freshly uprated EXE-TC suspension,” MacLeod explained.

“Colin Telfer keeps the car in great shape, so we expect good reliability. Claudia [MacLeod] wanted to do at least one forest event this year and this is the only one that worked in the calendar, but I do hope we can get out again, for one more at least.”

Having not driven in anger for a number of years, MacLeod has modest expectations for the Grampian.

“Our aim is quite simply to finish with no major damage, as we have no expectations due to lack of training, and skill on my part!

“We are also changing our pace note system on this event from 6-1 to 1-6, so that could cause some major stress in the drivers’ seat!”