SRC heads into its showdown with Grampian Forest Rally 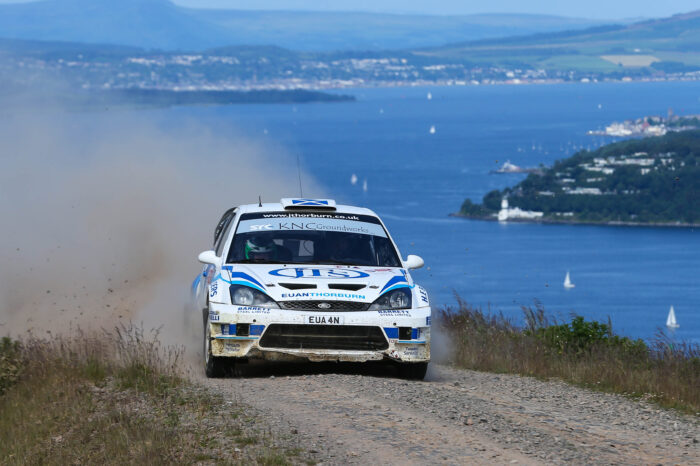 Thorburn and Beaton have been the crew to beat in their Ford Focus WRC05, scooping up victories on the Border Counties Rally, Speyside Stages and the recent Argyll Rally with only a stall at a hairpin costing him the win on the Scottish Rally.

The 2014 and 2017 champions subsequently stand on the brink of the title with a round to spare, and need only to finish the event in a points scoring place to assure them of their third Scottish success.

Their task has been made that bit simpler by the withdrawal of Garry Pearson and Dale Bowen, who have pushed Thorburn and Beaton hard throughout 2019 in their Ford Fiesta R5.

Unfortunately Pearson has elected not to contest either the Grampian or the Galloway Hills Rally in order to preserve his budget for next year, with his championship aspirations looking a bit slim despite three strong podium finishes throughout the year.

But the battle for success on the Grampian will be as electric as ever, with a gaggle of challengers determined to knock Thorburn off his perch.

Jock Armstrong will be at the front of the queue. The double SRC champion isn’t used to enduring a winless season in his Subaru Impreza, but he and Cameron Fair have just the solitary podium to their name this year. Forced to pull out of the Argyll due to last minute car trouble, Armstrong will be looking to make an impression this weekend.

Bruce McCombie and Michael Coutts bagged their first podium in their Ford Focus WRC on the Argyll, finally getting on top of the start-line issues that have plagued their year. The Grampian is McCombie’s home event, so he’d dearly love a repeat result.

John Wink and Neil Shanks had an Argyll to forget; their Hyundai i20 R5 suffering with several mechanical gremlins. Wink debuted the Hyundai on this event two years ago, and is a definite dark horse for a podium result.

Michael Binnie and Claire Mole are still determined to bag their first SRC podium together in their Mitsubishi Evo IX, while Donnie Macdonald and Andrew Falconer return in their Ford Fiesta R5 after missing the Argyll.

Ian Baumgart and Sinclair Young share the lead of the Albyn Garage SRC Challengers with Alan Dickson and Martin Forrest heading to Aberdeenshire. Baumgart’s Impreza and Dickson’s Evo IX will be challenged by the Evo IX’s of Keith Morris/ Terry Mallin and in particular Thomas Gray / Harry Marchbank who scored a sensational fifth place in Dunoon.

Elsewhere John Rintoul and Ross Hynd debut their Ford Fiesta R5 in the forests having won a Scottish Tarmack event in the car earlier this year.

The Scottish 2WD Championship is predictably close with two rounds of the year remaining.

Iain Wilson and Chris Williams became the first repeat winners on the Argyll in their Ford Escort Mk2, and thus hold a slim lead in the championship. Paul McErLean and Niall McKenna are winless but have been consistent, so lie second equal with Gordon Murray and David O’Brien.

Duncan MacDonald and Neil Ross will be in the hunt as always in their Ford Escort Mk2, as will Mark McCulloch and Michael Hendry who impressed on their Mk2 debut in Argyll. Chris Collie and Gary McDonald are also entering the fray in a Mk2 for their home event, looking to see how they measure up against the leading two-wheel-drive contenders.

It all gets underway at Milton of Crathes at 8.30am with the first car due to return at around 3pm in the afternoon.