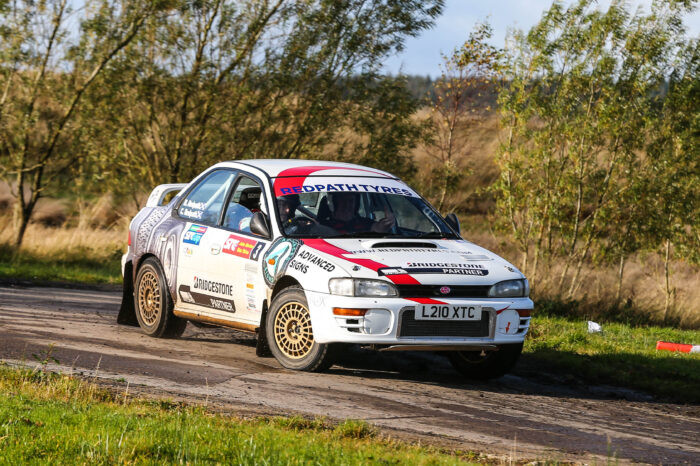 Redpath battled Scott Peacock, Bobby Mitchell and Fraser Smith after all four were nominated throughout the year for their noteworthy performances on a round of the SRC. Redpath narrowly came out on top from Bobby Mitchell, with just one point from the judges separating the pair, and will now receive invaluable driving tuition from 1999 British Rally Champion Tapio Laukkanen in two weeks’ time.

It caps off a hugely successful year for Redpath and co-driver Callum Redpath, who grabbed the UsedCarParts Subaru Cup in their Subaru Impreza with one round to spare.

Staged at Knockhill Racing Circuit for the second year running, the SRC John Horton Star Driver Award aims to reward an inspiring driver for their performances. With previous champions including Keith Riddick and Michael Binnie, it’s clear to see the award’s pedigree.

On the day, all four drivers brought their car to the circuit but the examination stretched far beyond just driving. Before writing pace notes that would later be used on the Knockhill rally stage with two times SRC Champion and former Vauxhall works driver Andrew Wood and 2001 World Rally Champion co-driver and head judge Robert Reid, each competitor faced a sit down interview with fellow judges Richard Moore and Gary Adam. A media assessment was conducted too, with Knockhill’s Duncan Vincent stepping in and quizzing the drivers in front of the camera.

All four drivers performed supremely well, but ultimately it was Max Redpath who came out on top after particularly impressing with his pace note writing.

Redpath admitted he didn’t expect to win but is relishing the chance to learn from Laukkanen.

“It’s difficult to take in at the moment but what a year it has been and what a moment,” Redpath said.

“It was a great day at the Star Driver Award shoot-out with so many experienced people there not just assessing but giving advice as well. Congratulations to all the other lads there today, I did not expect to win such a great competition!

“I’m very much looking forward to a day with Tapio Laukkanen to absorb all of his years of experience.”

“All four of our competitors deserve a mention for performing so well, but ultimately there could only be winner. Max Redpath has been a real star of the SRC, winning the Juniors in 2017 and the Subaru Cup this year. But Scott Peacock, Bobby Mitchell and Fraser Smith have all done themselves proud, so much so that they have been invited to the tuition day to observe.

“Michael Binnie proved last year that this prize with Tapio Laukkanen can make a remarkable difference, as he finished third in this year’s championship. We can’t wait to see how Max will develop from his time with Tapio!

“Our thanks to Robert Reid, Andrew Wood, Richard Moore, Gary Adam and Duncan Vincent for being part of the process and helping select a worthy winner.”