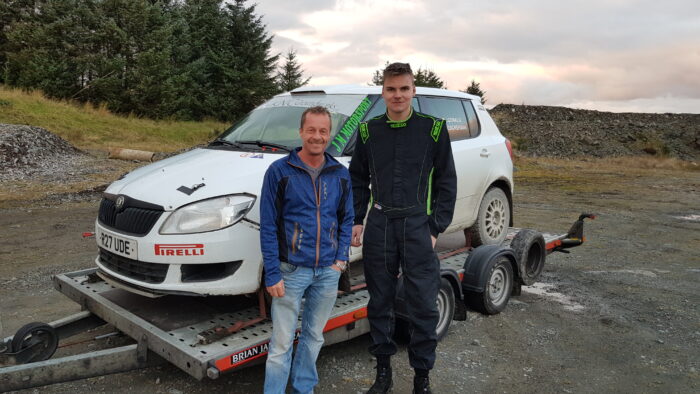 Laukkanen worked closely with each of the drivers, observing their driving technique before offering his advice on where they can improve and find the optimum set-up for their cars. The Finn also took to the wheel himself to get a feel for the car and demonstrate its true potential.

In the case of MacDonald, Laukkanen’s guidance totally changed the handling of his Skoda Fabia R2.

“Tapio wasn’t happy with the front end of the car, it wasn’t very stable, so we did a bit of work on that, softened it and basically almost transformed the car,” MacDonald said.

“I could drive it quite happily without having to hang on which at times I’ve been doing this year. To have somebody at that level sitting beside you, telling you you’re doing things right was a big confidence boost. A bit nerve-wracking initially mind you!

“I got way more out of the day than I thought I would. Between the car being more comfortable to drive and me driving it better it should hopefully allow us to go even quicker next year.”

Subaru Impreza pilot Redpath was similarly impressed with what he learned and is looking forward to putting it into practice on this weekend’s Jim Clark Rally, which joins the SRC calendar in 2020.

“Tapio’s knowledge on the set-up of the car was brilliant and he was quick to let me know what needed adjusted or changed in order to squeeze the most out of the car,” Redpath said.

“There are a few things we need to work on going forward, from the car’s set-up to adjusting our own pace-notes to suit us better and push us further. Big thanks to everyone who helped organise the day with Tapio and to Tapio himself, it couldn’t have been any better.”

“It’s an absolute privilege to be able to offer some of our competitors the chance to learn from one of the best rally drivers in Europe over the last two decades,” added SRC Chairman Gordon Adam.

“Our thanks to Tapio Laukkanen not just for his time but for his superb commitment, and to Bill Sturrock of Scotmaps who was a key part in making this happen. We look forward to next year’s tuition days already!”