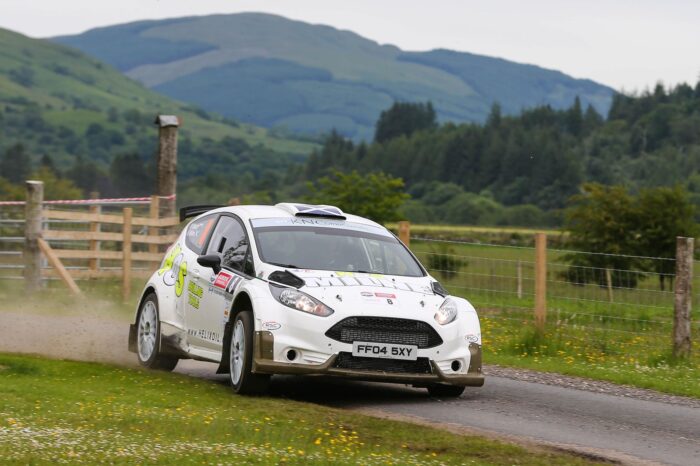 After 15 long months the KNC Groundworks Scottish Rally Championship is back with a bang with the 1st ever closed road Dunoon Presents…Argyll Rally.

Freddie Milne & Patrick Walsh had shown their true potential with a stunning fastest time on the final stage of the 2020 Snowman. They continued that form here, leading the event overnight and securing their 1st ever SRC win with a 4th overall finish in their Ford Fiesta R5. Freddie gave the main credit to co-driver Patricks’ professionalism and coaching throughout the event along with Dom Buckleys’ excellent car preparation. However, Freddies’ own abilities behind the wheel shouldn’t be underestimated……

Competing in an R5 car for the 1st time, 2 times champion Jock Armstrong had a lot to learn in Argyll. With co-driver Cammy Fair talking him through the stage start procedure all weekend Jock quickly learned the left hand drive game to finish an impressive 2nd SRC on his R5 debut. He says the car is availiable for the Scottish, but so is his venerable Subaru. Who knows which car he’ll pick for the return to the gravel.

New to the championship but well known in UK rallying, Richard Hill and Steffan Evans took 3rd in the SRC. Known for rapid MK2 Escorts Richard was out for the 1st time in the ex-Mike Faulkner Evo 9. Finding the car to be a bit nervous on Friday Night a change of tyres for Saturday made a huge difference to the car and they were able to grab 3rd despite a time-consuming puncture on SS7.

Taking both the top 2wd honours and 4th in the SRC Mark McCulloch and Michael Hendry were absolutely delighted with their result. A little nervous on the Friday, Saturday would see the Hardie MK2 at the head of the 2wd field and more importantly in front of rival and good friend Iain Wilson. Mark saying the Argyll roads might be the trickiest tarmac stages in the UK.

Challengers winners on the Snowman in 2020, Ian Forgan & Chris Lees had a much harder time in Argyll. Troubled by turbo boost problems all event Ian was having to draw on his past fwd experience in an attempt to keep the turbo spinning. Despite the issues they were able to secure another Albyn Garage Challengers win.

Out for the 1st time in his new Fiesta and his 1st time on closed public roads, Ewan Tindall would take the Junior win. Initially playing 2nd fiddle to the Flying Johnnie Mackay, Ewan would grab the lead when Johnnie unfortunately rolled out of the event halfway through Saturday. Climbing 23 places on Saturday the Fiesta driver finished ahead of both R5 cars and top class Evos and Imprezas. Very impressive for a 1 litre turbocharged Fiesta.

Further press releases will be issued in the coming week covering all the other categories and classes.

The next event for the SRC will be the RSAC Scottish rally based near Lockerbie in the South of Scotland on 24th July, where the Scottish Rally Championship competitors will be joined by the BTRDA championship for a friendly North vs South battle on the gravel.