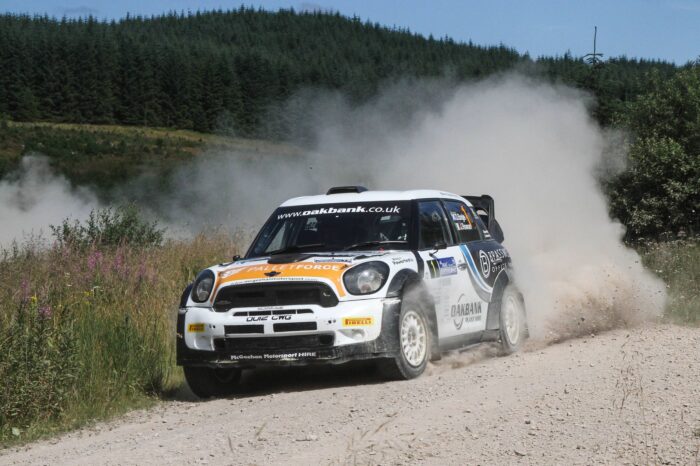 After the tarmac of Argyll the KNC Groundworks Scottish Rally Championship returned to its’ spiritual home, the forests, with the 75th running of the RSAC Scottish Rally.

Taking a historic 7th Scottish Rally win, breaking the legendary Roger Clarks’ record, David Bogie made the most of a dust free windscreen to win 5 out of the 5 stages. With John Rowan alongside David found the event to be much more of an endurance test than the tarmac.

Moving into the championship lead with a 2nd consecutive 2nd place Jock Armstrong & Cammy Fair continued to learn the new Rally 2 Fiesta. Having fitted his own seat, Jock was more comfortable than in Argyll although left hand drive still feels foreign.

Garry Pearson & Niall Burns were experiencing a Skoda Fabia R5 for the 1st time. Finding the car to be very different to the Fiestas they have driven before they were hampered by an early puncture. Catching a limping car in stage 3 didn’t help either, but they were able to secure a 1st podium of the season on the final stage.

Making it two 2 Wheel Drive wins out of 2, it was another solid weekend for Mark McCulloch & Michael Hendry. Despite battling the dust from previous cars they stayed clear of punctures to strengthen their lead in the 2wd championship.

2nd 2 Wheel Drive and taking the Albyn Garage Challengers win it was an excellent debut for Peter Stewarts’ new 208 R4. Driving well all day the only big problem was a puncture in stage 5. Peter will be looking to do even better next time out as he learns his new car which looked and sounded great on the stages.

After rolling out of the junior lead in Argyll Johnnie Mackay & Emily Easton-Page were looking for redemption here. They delivered on that, staying on the road while others fell off to grab the junior win.

It was handshakes all round among the Andrew Wood Motorsport Subaru Cup runners at the finish. Taking the win this time Michael Renton & John Shepheard battled through the dust and some overheating issues to grab their 1st top spot of the season.

In just 3 weeks time the circus will descend on Banchory for the Grampian Forest Rally, which will also be a round of the British Rally Championship for the 1st time.