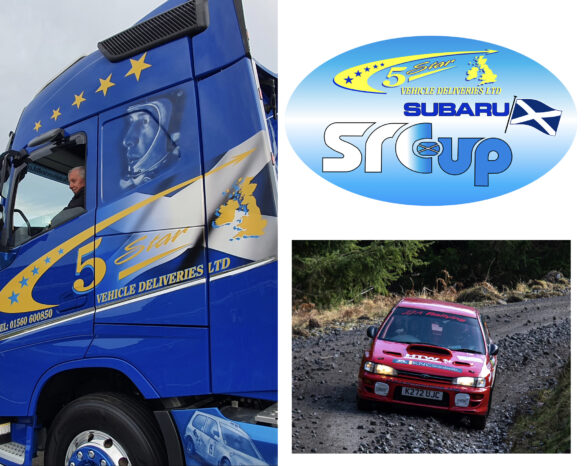 The Subaru Cup competitors on the upcoming McDonald & Munro Speyside Stages, Round 2 of the 2022 KNC Groundworks Scottish Rally Championship, will be carrying new decals after Kilmarnock based nationwide vehicle delivery company Five Star Vehicle Deliveries Ltd stepped in to sponsor the popular series on the eve of the Championship.

As a result, the Subaru Cup winner on each of the 8 rounds of the series will receive a prize, with first round winner Jordan Anderson being the first recipient.  Jordan and co-driver Clare Mackenzie turned in an impressive performance on their first event in a 4 wheel drive car to take top honours.

Owner of 5 Star Vehicles Deliveries, James Gibb, has himself been a rally competitor for many years, driving a variety of machinery on sealed and loose surface events.  The companies blue and yellow livery invoke memories of the halcyon days of the iconic 555 sponsorship of the works Subaru Imprezas, one of which took Colin McRae and co-driver Derek Ringer to the world championship title back in 1995.

James is delighted to be able to support the series, which was first launched in 2016 aimed at clubman competitors and features a closely controlled specification which is designed to offer good performance whilst keeping costs under control.

“The Subaru Cup is a fantastic series that provides close competition and a friendly rivalry, which epitomises what rallying is all about.  This year there are more competitors in the series than ever before and we hope that our support will help the series to continue to go from strength to strength.”