After 2 tarmac rounds the KNC Groundworks Scottish Rally Championship returned to the gravel for round 5 of the 2022 season, the RSAC Scottish Rally based in Moffat. 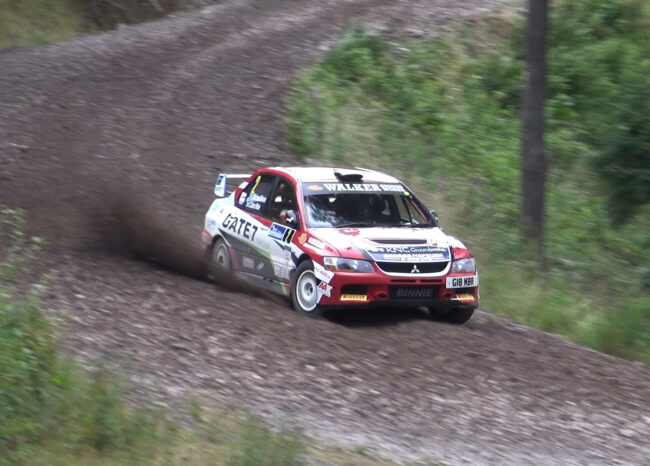 In the mix at the front of the field over the 1st 2 stages Michael Binnie & Claire Mole took the lead with fastest time in stage 3. After that they were never headed all the way to finish, keeping the Evo clear of the punctures and issues that affected others, to take their 2nd win of the season. Arriving at the Moffat finish to a fantastic reception despite the weather it was an emotional occasion, especially for Claire. The Scottish being the 1st international she competed on at the start of her career.

This result puts the Lancer driver back into the championship points lead as their sensational season continues. 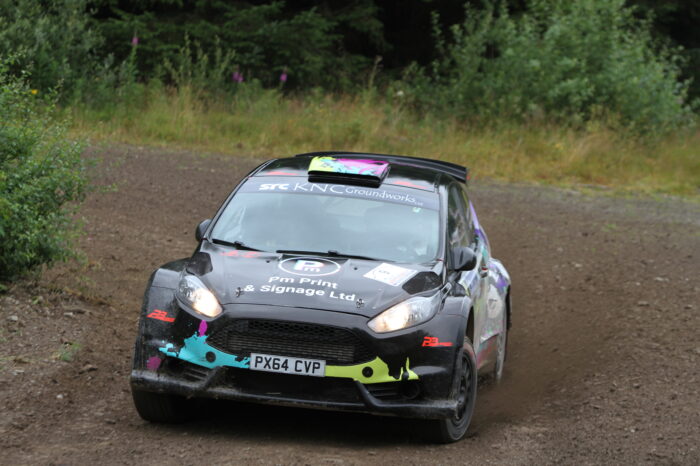 After producing one of their best drives on the Argyll, Hugh Brunton & Drew Sturrock’s momentum continued on the Scottish. Trying out a new tyre compound for the gravel the Fiesta crew were swapping times at the top of the results all day. They survived a late visit to the undergrowth on the final stage to take their best ever SRC result with an excellent 2nd overall. 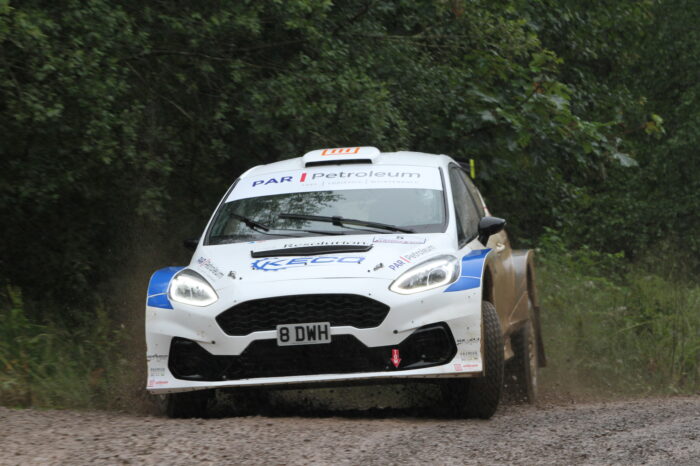 Leading after stage 2, David Henderson & Chris Lees were just 1 second down on Binnie & Mole after stage 3. A double puncture would then drop the Rally 2 Fiesta to 7th with 2 stages remaining. Back up to 5th with 1 stage left they would fly over the final stage, fastest by 16 seconds and snatching 3rd right at the end of the event to make it 2 podiums in a row for the new car. 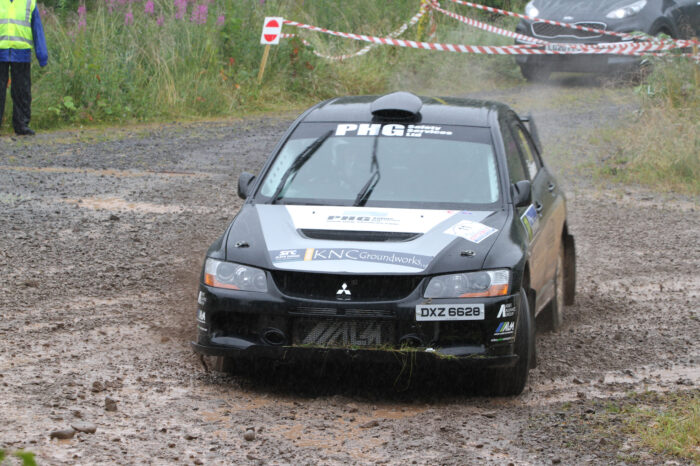 The Albyn Garage Challengers win once again went to the Evo of Angus Lawrie. With reigning challengers co-driver Paul Gribben alongside as usual Angus was flying on his home stages, threatening the podium positions until a damaged suspension arm cost him around a minute. Despite that the black Evo would take a fantastic 5th overall and 4th in the SRC by just 6 seconds from ALM teammates Willie Paterson & Tom Hynd, who chased them hard all day and almost caught them over the final stage. 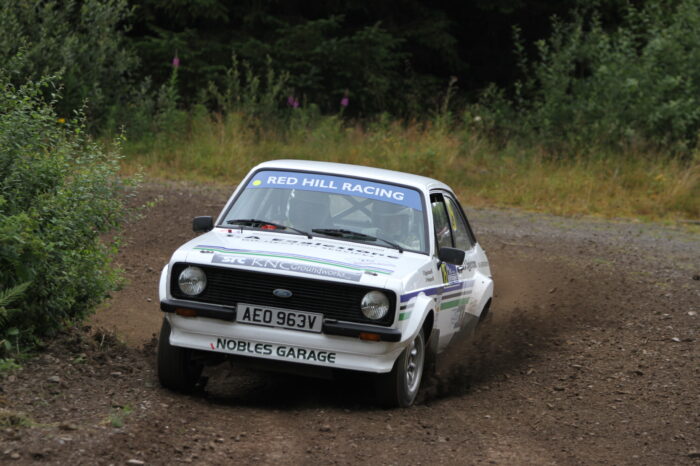 Taking their 2nd Autoshop 2wd win of the year Stuart Egglestone & Brian Hodgson once again defied the more potent 2wd cars in their Pinto engined Escort, even lifting the bonnet at the finish to prove it was indeed Pinto powered. Stuart enjoying the stages despite the horrible weather trying its’ best to steam up the inside of the historic car. 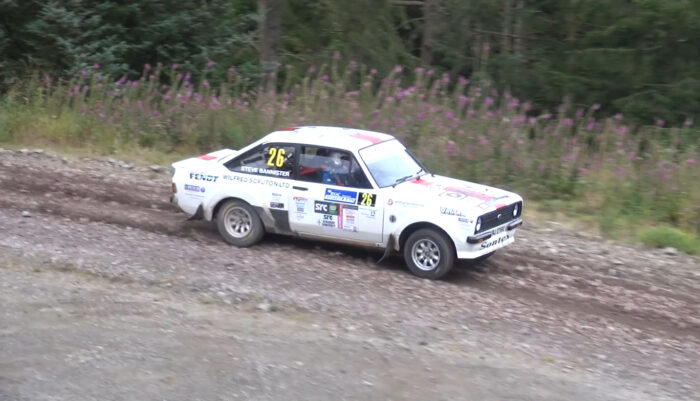 3rd 2wd car home, Steve Bannister & Dave Robson managed yet another Haddo Energy Super Seniors win for the famous white & red Escort. Finding the loose stages to be quite challenging they were relieved to have survived a difficult day out in the forests.

Orrin McDonnell & Eoghan Anderson took their 2nd 5 Star Vehicle Deliveries Subaru Cup win in a row, taking the lead after Jordan Anderson & John Shepheard retired. The Orange Impreza sporting new suspension after damage sustained in Dunoon. It wasn’t plain sailing, the front right hub and driveshaft barely hanging together at the end of the day. They survived to take the win by 40 seconds from Cup leaders Mike Moates & Gary McDonald. 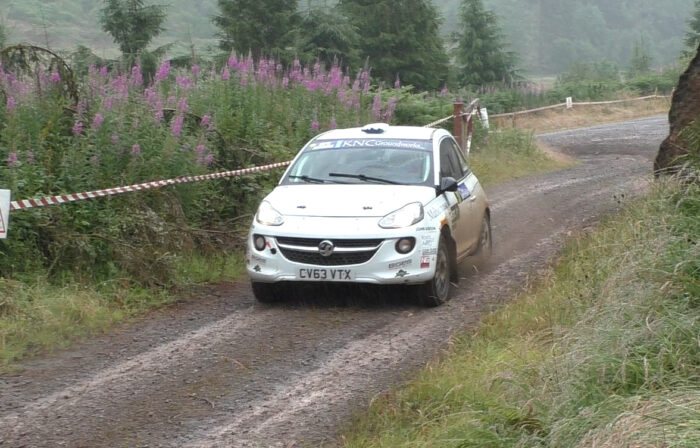 Bouncing back after retiring on Argyll, Robert Proudlock took the Moates Offshore Juniors win in his home forests with Steven Brown alongside. Too cautious on the 1st stage Robert responded by almost putting the car off on the 1st corner of stage 2. After that he started to get the hang of the Adam on these stages, finding the short wheelbase a tricky prospect, especially when the rain came. The Adam driver took the win by 2 minutes from Justin Gunning, the Fiesta pilot delayed by multiple punctures throughout the day. 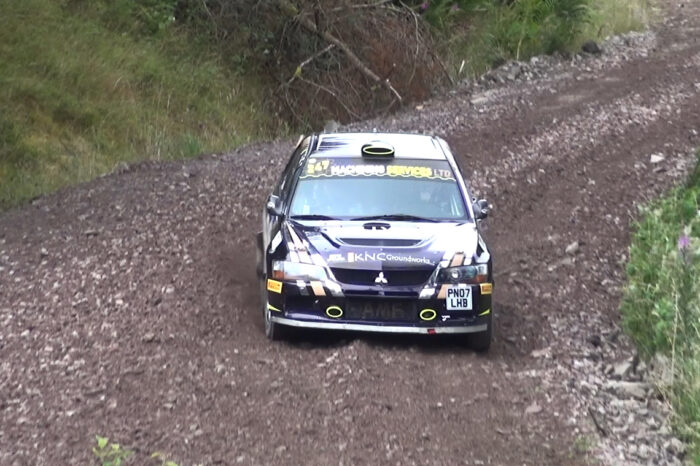 Strengthening her ladies points lead it was another win for Aileen Forrest in her Evo 9. With husband John alongside as usual Aileen showed how much her pace has improved this year, guiding the car to an excellent 27th overall at the finish. The Evo was 6 minutes up on Ashleigh Morris & Martin Haggett who were delayed with a costly puncture in stage 5.  Meghan O’Kane took 3rd with Dad John alongside as usual, the purple Fiesta slowed by gearbox and brake issues as well as a faulty demister.