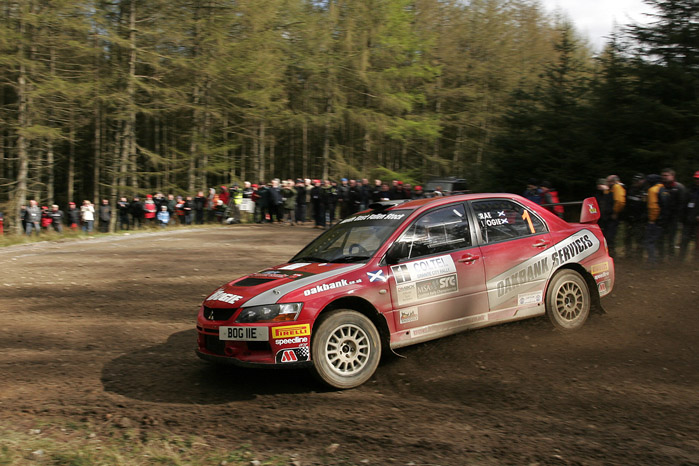 Aberdeenshire driver Quintin Milne will have home support as he targets a third consecutive victory in the ARR Craib MSA Scottish Championship on Saturday 20th April.

Milne won impressively in treacherous conditions on last month’s Border Counties, and will be looking to take maximum points on the Coltel Granite City Rally, which has attracted a strong field of 113 entries.

The Banchory competitor, who celebrated his debut SRC win on the final Colin McRae Stages round last year, will line up his Mitsubishi EVO 9 as third seed, alongside co-driver Martin Forrest from Aberdeen.

First away from the start- ramp at Duthie Park in Aberdeen will be defending Scottish champion David Bogie – winner of the Granite last year and in 2010, and runner-up by just one second to Dave Weston in 2011.

The Dumfries driver – who is still adapting to his left-hand drive Ford Focus WRC – was, on his own admission, frustrated by poor tyre choice in the ice and snow of Kielder Forest. Nevertheless, he still managed to salvage third place in the SRC points, alongside navigator and fellow four-times champion Kevin Rae from Hawick.

Meanwhile, his Borders’ rival Euan Thorburn – second on the Granite in 2012 – endured a difficult day in his Focus WRC, finishing tenth in the points. The Duns’ man – winner of the Malcolm Wilson Rally in March – will again have Paul Beaton of Inverness on the notes.

Dumfries and Galloway crew Jock Armstrong and Kirsty Riddick will be looking to kick-start their championship campaign after a non-finish in the Borders: their Subaru Impreza sliding off and becoming stuck on an embankment on the first stage.

2009 Granite winner Mike Faulkner, co-driven by Peter Foy, finished a hard-earned fifth in the points on the Border Counties in his ex-David Wilson Mitsubishi EVO 9, but says the Aberdeen event should offer the first opportunity to find out the real potential of the car:

“We don’t really feel as though we’ve got this season going yet”, said Faulkner: “The Border Counties was a lottery, and while we were pleased to get through safely, it wasn’t really an event you could attack and know where the pace is for the rest of the year”

He went on: “We enjoy the Granite, but since our win in 2009 it hasn’t been a great event for us but hopefully we can put that right. The stages are fast and tricky with some very loose bits, which should suit us, so hopefully we can give the new car a proper test. With the weather throwing up different results for a lot of the championship front runners on the Borders, the Granite is already a critical event for the SRC, with a top quality entry”.

A threat to the SRC regulars could come from Aberdeen’s Dave Weston Jnr, who has teamed up with international co-driver Claire Mole, in an EVO 9 for his local event, while Barry Groundwater, runner-up on the Border Counties, starts one place further back in his EVO. The Stonehaven driver will have Neil Shanks from Elgin on the notes.

The Highland contingent will be led by Inverness crew Donnie MacDonald and Andrew Falconer who got their season off to a strong start, ending the day fifth overall, fourth in the points in Jedburgh in their EVO 9.

Also looking for a strong finish will be 2007 Granite winner Andy Horne, co-driven by Kilmarnock’s Jim Howie, at the wheel of his ever-popular DAM 4100gti

The leading Group N car is the Subaru Impreza N15 of John McClory and David Hood. They won the category on the Border Counties with a seventh place finish, sixth among the registered championship competitors.

On last year’s Granite, Bruce McCombie produced one of the drives of the day in his Subaru Impreza to finish fourth overall behind Bogie, Thorburn and Paul Benn. The Banchory driver, who is seeded eleventh, will team-up with leading co-driver Dave Robson for his local event.

Fellow Aberdeenshire competitor Calum Mackenzie, paired with navigator Neil Ewing from Largs, makes a welcome return to competition in his Ford Escort Mk2, while a number of class winners on the Border Counties will be back in action among the smaller-engined 2WD entries.

In Class 2, Highland duo Ross Macdonald and Matthew Johnstone will aim for a second successive maximum points haul in their Vauxhall Corsa, while Dumfries and Galloway’s Iain Haining and Mairi Riddick – in a Vauxhall Corsa – will be the crew to beat in Class 3.In Class 7, Ian and Kathryn Forgan from Lundin Links will look to carry over their good form from the Border Counties in a Ford Ka.

As always, there is the prospect of fierce competition for top honours in the 1600cc category. Leading contenders include Alasdair Graham from Paisley in a Vauxhall Corsa; and Lanarkshire’s Graeme Smith and Glasgow-based Grant Inglis, both in Honda Civics.

Full details can be found at www.granitecityrally.co.uk