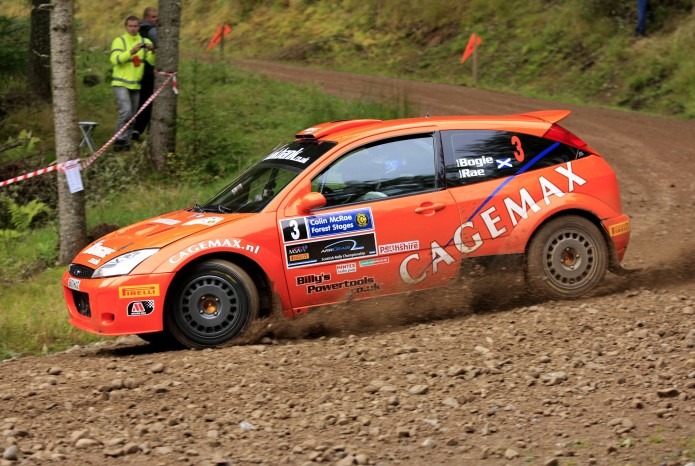 The 26-year-old from Dumfries, co-driven by Kevin Rae from Hawick, powered his Ford Focus WRC to victory on Saturday’s Colin McRae Forest Stages Rally, the penultimate round of the ARR Craib MSA Scottish series.

Mike Faulkner and Peter Foy were runners-up in their Mitsubishi EVO 9 – more than two minutes behind – with Dave Weston and Dave Robson third in a Focus WRC, a further twenty-two seconds adrift.

It was not the best of starts for the defending champions. Their car hit a rock half a mile into the second stage, resulting in a front-left puncture which lost them twenty-one seconds to main rivals Euan Thorburn and Paul Beaton, also in a Focus WRC – after both crews had equalled the bogey time on SS1 Sophia Wood.

Bogie pulled four seconds back over the 13 miles of SS3 Errochty, and another second on the short fourth Kindrogan stage. He was also fastest through SS5 Blackcraig, with Thorburn eight seconds slower after an oil-pipe burst.

Following repairs at the service stop in Blairgowrie, the Duns driver still had an eight-second advantage going into the final ten miles of Craigvinean – and it was starting to look as though the title fight would go down to the final round in Galloway later this month.

However, disaster struck for Thorburn when the Focus picked up a puncture. He lost 26 seconds and, with a developing gear-box problem, decided to retire the car.

For their part, Bogie and Rae were both delighted and relieved at the champagne-spraying finish in Aberfeldy.

“We went into that last stage with absolutely the wrong tyre – it a was a complete gamble – so we just drove it over the limit and never backed off”, said Bogie: “Obviously towards the end Euan picked up a puncture and that allowed us to take the win. But I really feel we deserved it – I felt it was our day. Apart from the stage where we had the puncture, we were quickest through the rest. It’s great to win the championship with one round to go. It’s been a real challenge this year, learning the new car, and great credit must go to our team and the boys who prepare it from one round to the next”.

Co-driver Rae admitted they had harboured doubts about making up the lost time after the second stage puncture: “Twenty-one seconds is a lifetime to lose against Euan because it’s been that close on every other rally but we like these stages and we were fairly confident we could pull some of the time back. That early in the day we weren’t going to give up because anything can happen, so we just kept pushing. We certainly didn’t want it to go down to the wire on the last round!”

It was Faulkner and Foy’s highest placed finish of the season – after a third spot on the Granite City in April, and the pair were more than satisfied with the performance:

“The car handled perfectly after we fixed the rear brake scrapers, which were jamming the wheel, and in turn messed up the diff. We really enjoyed the last two stages”, said Faulkner: “Euan and David are in their own event really, in the world rally cars, so “best of the rest” is probably as good as it gets”.

Weston and Robson were lying third overall after three stages, but from then on, it proved to be a hard-earned third place:

“We had a horrible afternoon”, admitted Weston: “We’d had a good run through stage three, although it was quite rough, and then we went into four, and although we didn’t know it at the time, we’d knocked a wheel speed sensor off – so effectively we had no back diff working. First we had an off, then I stalled the car, and then late on in what was a short stage it tried to spin out on me, and I thought there’s something seriously wrong here. We had a massive spin in the fifth stage and lost a lot of time, and by the time we got to the final test, it was just a case of getting through it – but we had no third gear”.

In contrast, Donnie MacDonald had “a sensational” last three stages behind the wheel of his EVO, on the way to his second fourth place of the season:  “A couple of spins earlier on lost us time, but to go third fastest on the final stage was fantastic”, said the Inverness driver.

Jon Burn and Alan Stark were fifth overall, to add to their sixth place on the previous Merrick Stages round, in their Subaru Impreza WRC. The non-championship registered crew finished just four seconds ahead of the EVO 9 of Stonehaven’s Barry Groundwater, who had Neil Shanks of Elgin on the notes.

“We had a reasonable run. A slow start to the morning – we didn’t want a repeat of the non-finish on the Merrick”, explained Groundwater: “It was a case of plodding along and bringing the car home in one piece”.

Alistair and Colin Inglis (“It was difficult to know where the grip was on the early stages”) secured their fifth top-ten finish of the campaign in their EVO 5, three seconds ahead of the battered Subaru Impreza of Newton Stewart’s Mark McCulloch.

“After the day we’ve had, it’s something of a miracle that we’re here at the finish”, said McCulloch: “First stage of the day I forgot the intercom lead for my helmet, so we lost a lot of time there. Second stage I just went too fast through the first half mile and whacked a big log pile, smashing pretty much the whole back-end of the car. That really put us under pressure at service to get it back on the road. But after that we managed to build the pace back up again”.

For the third successive event, Andrew Gallacher and Phil Sandham won Group N honours in their Mitsubishi EVO 9 – ending the day in ninth overall – with Bruce McCombie and Michael Coutts, in a hired GpN EVO 9 – rounding off the top ten, a further twelve seconds back.

“It was very interesting”, said the former Subaru Impreza driver of his EVO experience, “I can’t fault the car – and it’s quite forgiving on the stages, but I can’t say I’m hooked on it”.

A puncture on the second stage did little to halt Steve Bannister’s progress in his Ford Escort Mk2. He finished as the leading 2WD competitor, alongside Hawick co-driver Louise Sutherland.

Ian Wilson and Keith Fremantle from Dalbeattie took top honours in the 1600cc category in their Vauxhall Nova – finishing the day 22nd overall “The best event in the championship so far. Absolutely brilliant”, enthused Wilson.

Fellow south-west of Scotland crew Iain Haining and Mairi Riddick, also in a Nova, only had to get over the start line to make sure of Class 3. Having ticked that box, the pair went on to seal their seventh consecutive class win. Lauder’s Callum Atkinson, with Sue Hynd co-driving, was runner up in his Peugeot 205GTi , twenty-two seconds back.

“We were down three seconds on Chuck Blair in his Peugeot after two stages so we put in a big push through the thirteen miler and took quite a bit of time off them. Then it was a case of dodging the stones and trying to keep in the middle of the road – so we had to have another push through the last stage. But we won the class by twenty odd seconds so it’s all paid off”.

Lauder’s Callum Atkinson, with Sue Hynd co-driving, was runner up in his Peugeot 205GTi , twenty-two seconds back.

Among the notable retirements were Quintin Milne – sitting second in the drivers’ points – who was forced to retire because of back pain; Chris Collie, who had suspension problems with his EVO 6 on stage four; and Andy Horne, following gearbox issues with his DAM 4100GTI.

The eighth and final round of the championship will be the Armstrong Galloway Hills Rally, based in Castle Douglas, on Sunday October 27th.