Gloves off for “Scottish” showdown 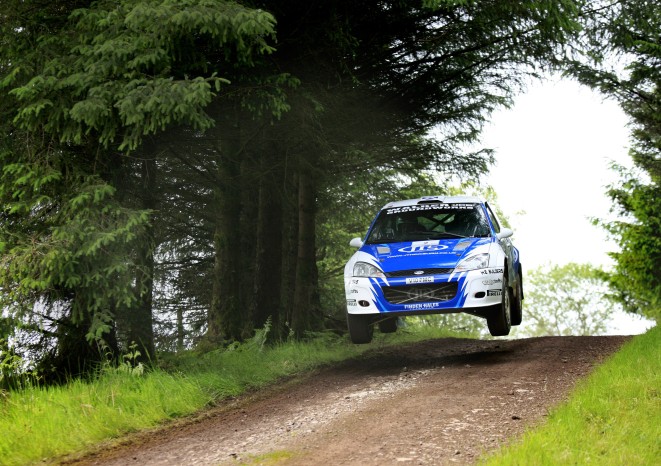 Borderer Euan Thorburn will be looking to tighten his grip on the 2014 ARR Craib MSA Scottish Rally Championship with a second successive win in Dumfries next weekend.

The Duns-based Ford Focus WRC driver, who won his first RSAC Scottish Rally twelve months ago, starts the second half of his championship campaign with an eight-point lead in the overall standings.

He has chalked up two victories so far this year alongside co-driver Paul Beaton from Inverness: the season-opening Snowman Rally, and the Granite City Rally in April.

On Saturday, he will resume his duel with defending champion David Bogie, as the SRC returns to the gravel following the cancellation of the Jim Clark Reivers tarmac round in tragic circumstances.

For Bogie, his home event will open a new chapter in a stellar rallying career. He will line up his newly-acquired M-Sport Ford Fiesta R5+, which replaces the ’02 Focus WRC of the past eighteen months.  The five-time title-holder, co-driven by Kevin Rae from Hawick, has  one aim in mind as he gets to grips with the new car:

“The second half of the season is all about getting it set up correctly to my liking and giving ourselves the best chance possible for a crack at the final round of the world championship, Wales Rally GB, in November”, said Bogie: “The R5 is a lot simpler in every respect, compared to the Focus, but with new technology, it should be quicker”.

2011 “Scottish” winner Jock Armstrong has had the engine and gearbox of his Subaru Impreza rebuilt – and all the electrical fuses replaced – since finishing as runner-up on the “Granite”.

Co-driven by Paula Swinscoe, the Castle Douglas-based competitor will be looking to keep up the momentum. The rally route includes “Jock’s” special spectator stage – created in a  quarry near Dalbeattie owned by the Armstrong family  – a feature first used on last year’s  Galloway Hills Rally.

Quintin Milne, who currently sits second in the points, and who clinched the final podium spot in Dumfries last year, has switched cars ahead of the event.  The Mitsubishi EVO 9, in which he achieved one second and two fourth-place finishes over the first three rounds, has been replaced by a Focus WRC.

The Banchory driver entered the car for this weekend’s DMACK Modern Carlisle Stages Rally, and came away with a victory alongside Aberdeen co-driver Martin Forrest: the winning margin nearly one and a half minutes.

Mike Faulkner and Peter Foy will also be targeting a big points haul after clinching the final podium spot in Aberdeen in their Mitsubishi EVO 9:

“We were pleased with our performance and third place on the Granite, and we’re certainly hoping we can push for the same on the Scottish”, said Faulkner: “ The event has a good mix of fast and flowing stages where full commitment is needed, along with some really technical bits. We also have the added spice of “Jock’s” super special which will be great for the crowds but also its tight twisty nature makes it easy to make a mistake. Although the event can’t be won there, it can easily be lost”.

Donnie Macdonald and Andrew Falconer are seeded sixth in their EVO 9 – the Inverness driver buoyed by a fifth-place finish in Aberdeen. Stonehaven’s Barry Groundwater and co-driver Neil Shanks from Elgin, who sit third in the overall championship standings, start one place further back, also in an EVO 9.

Chris Collie from Portlethen, who was ninth overall on last year’s Scottish, slots in as number eight seed alongside Workington navigator Mark Fisher, while Rory Young, with Allan Cathers co-driving, will have home support to spur him on behind the wheel of his EVO 5.

Dougal Brown and Lewis Rochford from Inverness will be targeting a good points haul in their EVO, as will Banchory’s Bruce McCombie, co-driven by Michael Coutts,  who is currently fourth in the drivers’ points in his EVO 9.

Wigtownshire-based Subaru Impreza pilot Mark McCulloch, with Jim Haugh navigating, will be looking for a repeat of his sixth place on the Granite – his best-ever SRC result.

Andrew Gallacher, with Neil Ewing navigating, heads the Group N competitors in his EVO 9. The Hurlford-based driver will resume his battle with Port William’s Fraser Wilson, also in an EVO, who took the class win in Aberdeen by just two seconds alongside co-driver Jane Nicol.

Steve Bannister, with Louise Rae on the notes, has built up a twelve-point cushion in the 2WD Clubman championship in his historic-spec Ford Escort Mk2, and will be the man to beat for overall 2-wheel drive honours on the day.

Colin Aitchison from Duns currently leads the way in Class 9 in his Vauxhall Chevette Hsr, while  in Class 7, Graeme Schoneville (Honda Civic Type R) is protecting a three-point lead over Callum Atkinson in a Ford Fiesta R2.

In the 1600cc category, Thornhill’s Greg McKnight, with dad Chris on the notes, has the upper hand going into the second half of the season in his Escort Mk2, ahead of Duncan Campbell in a Honda Civic, Peter Stewart in a Ford Fiesta, and Alasdair S.Graham, who took maximum points on the “Granite” in his Vauxhall Corsa.

In Class 3, RSAC Motorsport New Talent Scholarship driver Blair Brown, with Richard Simmonds navigating, has steered his Peugeot 205 to a slender two-point lead over Locharbriggs’  Iain Haining, co-driven by Mairi Riddick,  in a Vauxhall Nova. Scott Peacock and Chuck Blair are two other local drivers who will be pushing for class honours in their respective 205’s.

Meanwhile, young Ayr driver Derek Connell, alongside Laura Marshall from Newton Stewart, currently has the advantage in Class 2 in his Vauxhall Corsa. The pair were in dominant form on the “Granite”: Connell’s fourth competitive outing on gravel.

You can find full details of the event at  www.scottishrally.co.uk