Plenty at stake on Speyside Stages 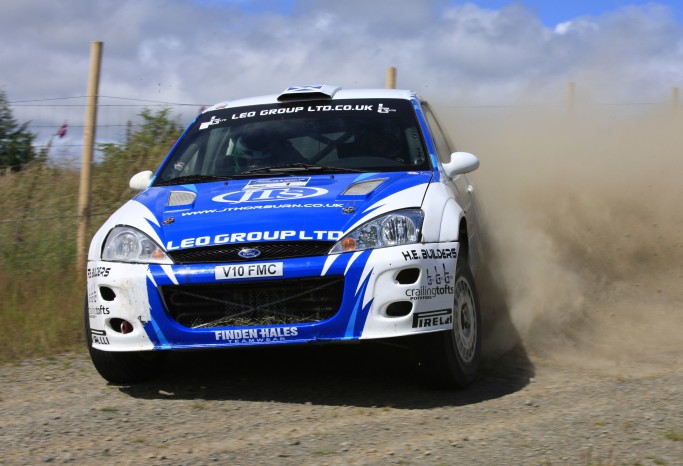 With just 3.5 seconds separating David Bogie and Euan Thorburn at the conclusion of the previous round, there is an intriguing tussle in prospect as they prepare to lock horns on the McDonald & Munro Speyside Stages next Saturday.

The pair have two wins apiece in the 2014 ARR Craib MSA Scottish Rally Championship after four events. Thorburn currently leads the series by nineteen points from Barry Groundwater, with Bogie now up to third – a further eleven points adrift.

The Dumfries driver, with Kevin Rae navigating, kept his nose in front on the RSAC Scottish Rally to clinch a debut win in his new Ford Fiesta R5+ – a replacement for the Ford Focus WRC in which he won his fifth Scottish championship, and his fifth Speyside Stages title, in 2013.

While Bogie was fastest through five of the seven Dumfriesshire stages, he is still assessing the true pace of the new car against that of his main rivals:

“It’s been a real learning experience – adapting my driving style, my braking lines, everything. On the high speed stuff, the 1600 engine can’t really compete with the 2litre cars. I’m not sure how we’ll fair on the short sprint stages on the Speyside”.

Thorburn and co-driver Paul Beaton from Inverness will be pushing for their second Speyside victory, having won the event in 2012, and been runners-up twice, including last year. The Duns-based driver is determined to extend his points advantage in the title race, with four rounds remaining:

“ I just need to make sure there’s no repeat of the stupid mistakes on the Scottish, when I fluffed the start on the first stage. The Speyside stages are not so long, so any time lost is hard to get back. I always enjoy the event though. We had problems with the car last year, but it’s in far better shape, so hopefully we can have a clean run and go one better this time around”.

Third seed Jock Armstrong, co-driven by Paula Swinscoe from Chorley, comes off the back of a final podium place on the Scottish in his Subaru Impreza. The result moved the Castle Douglas driver into fourth spot in the championship, four points behind Bogie:

“We tested the car last weekend, and hopefully all is well with it now, after a few niggles” said Armstrong, who was runner-up in Elgin in 2010, and has finished third and fourth in the past two years: “All we need now is some good driving – and good luck!”.

Quintin Milne, with Martin Forrest of Aberdeen on the notes, will be keen to get his championship campaign back on track after a non-finish on the Scottish in his Ford Focus WRC. The retirement followed three strong fourth-place finishes for the Banchory driver.

Mike Faulkner and Peter Foy have been on the Speyside podium three times in recent years but know they will have to be at the top of their game if they are to achieve a top three finish next weekend in their Mitsubishi EVO 9:

“Although not normally a fan of the shorter stages, I enjoy the different challenge, and it’s the variety that makes the Scottish Championship what it is”, said Faulkner: “As well as being very fast, the stages can be very loose, which makes the surface like marbles in places. The competition will be as close as ever, with the usual suspects giving it 100 percent from the word go”.

With regular navigator Neil Shanks on Clerk of the Course duties, Stonehaven’s Barry Groundwater will be paired with Sean Donnelly, as he looks to build on a consistent run through the first half of the season in his EVO 9.

Donnie MacDonald and Andrew Falconer, also in an EVO 9, start as seventh seeds in an EVO 9, one place ahead of the Ford Focus WRC of fellow Inverness duo Andy and Alison Horne.

Mark McCulloch from Newton Stewart is determined to bounce back and push for a top six finish, after the disappointment of an early retirement on the Scottish in his Subaru Impreza. He will again be alongside experienced navigator Jim Haugh.

The battle for Group N honours will again see Fraser Wilson, co-driven by Jane Nicol, go head-to-head with main rival Andrew Gallacher, who rolled his EVO on the opening stage in Dumfries.

Among the 2WD entries, Lauder’s Callum Atkinson, in a Ford Fiesta RT, currently leads the Class 7 championship. He has a nine-point advantage over Bothwell’s Graeme Schoneville in a Honda Civic Type-R.

Greg and Chris McKnight had an excellent day on the Scottish in their Ford Escort Mk2 to build on their points lead in the 1600c category, while Greg also consolidated his advantage in the Junior Drivers’ standings. He is again likely to face strong competition from, among others, Kieran Renton of Coldstream in a Ford Fiesta R200; Peter Stewart from Dumfries, also in a Fiesta; and Paisley’s Alasdair S.Graham in a Vauxhall Corsa.

Among the Peugeot 205 entries, Scott Peacock from Castle Douglas has a slender lead in Class 3 over Chuck Blair of Dumfries, while in Class 2, Ayr’s Derek Connell (Vauxhall Corsa) will fight it out with Highlander Scott MacBeth and Galloway’s Angus Lawrie, both driving Vauxhall Novas.

Full event details can be found at www.speyside-stages.co.uk