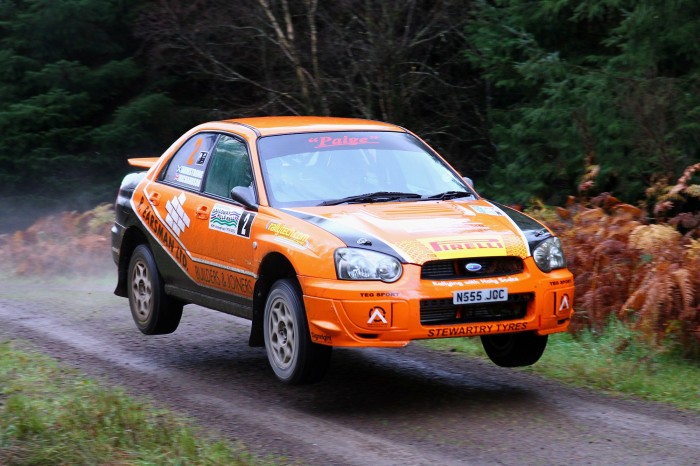 With the overall title in the 2014 ARR Craib MSA Scottish Rally Championship already decided, the focus next weekend will be on the fight for the remaining podium places.

Sunday’s final round, the Armstrong Galloway Hills Rally, will see six-times event winner Jock Armstrong again lock horns with Mike Faulkner after a season-long tussle, while multiple champion David Bogie will be fine-tuning his car ahead of next month’s Wales Rally GB.

Both Armstrong and Faulkner go into the “Hills” on equal points in the drivers’ and co-drivers’ standings, with the placings decided on the best six rounds from eight.

Armstrong, co-driven by Paul Swinscoe, has clinched the final podium spot four times this season in his Subaru Impreza, and was runner-up on the Granite City Rally in April. He has also had a fourth-place finish and a DNF.

Faulkner and navigator Peter Foy have been runners-up twice in succession in their Mitsubishi EVO 9: most recently on the Colin McRae Forest Stages where Euan Thorburn and Paul Beaton secured their first Scottish crown. They have also had two third place finishes, two fourths, and a non-finish:

“We’re reallying looking forward to the last round of the year – it’s going to be another great battle with Jock and whoever finishes in front takes third in the championship”, said Faulkner: “If David doesn’t get to the end, then this will be converted to second in the overall standings – although that’s not the way Jock or myself would want it. David has earned the position after a fantastic battle with Euan all year”.

For his part, Bogie, with Hawick’s Kevin Rae on the notes, will be assessing the pace and set-up of his Ford Fiesta R5 as he prepares for his WRC debut:

“We’ll have the car in world championship specification for the “Hills”, using WRC tyres and fuel. It’ll be identical to what we’ll be using in Wales”, said Bogie: “The stages on Sunday will be a good test – with plenty of variety. You’ve got Dalbeattie which is very narrow, tight, twisty and technical, while the others are quite high-speed. If we get to the end and we’re on the pace, then it’ll give us some good indicators for the Welsh round”.

Inverness duo Dougal Brown and Lewis Rochford make the long trip to Galloway in confident mood after a consistent 2014 campaign, including two successive fifth-place finishes in their Mitsubishi EVO 9.

Newton Stewart’s Mark McCulloch, who won the Galloway Hills in 2011 and was third in 2012, started the year with three top-ten finishes in his Subaru Impreza alongside navigator Jim Haugh, but has been dogged by problems since mid-season:

“We found a few problems with the car after the McRae, and it turns out the reason I could hardly keep it on the road was because there was a fault with the diff controller, so the car was working majority rear wheel drive”, explained McCulloch: “We now have that sorted so we’re both looking forward to the Galloway Hills. After all the problems this year it would be nice to get a good result on the last round”.

Fellow Wigtownshire driver Fraser Wilson, co-driven by Jane Nicol, only has to cross the start line on the Galloway Hills to secure the Class 10 championship in his EVO 9, and he will be looking to take the fight to Borderer Dale Robertson for Group N honours. The Duns’ man, with Paul McGuire of Tranent on the notes, has had a strong second half to his season with three successive class victories in his EVO.

There are no fewer than thirteen Ford Escorts on the entry list – the majority fielded by an exceptional Irish contingent of more than 20 crews, who have been offered free return ferry crossings by the rally organisers, in association with the Dumfries and Galloway Council Major Events Strategy Fund.

Of the SRC-registered Escort competitors, Clubman 2WD champions Steve Bannister and Louise Rae will be back in action in their historic-spec Mk2, while Dumfriesshire’s Greg McKnight, who has already sealed the Junior Drivers’ title, will be looking to round-off an excellent season in his Mk2, alongside co-driving dad Greg. The pair will again go head to head in the 1600cc category with Alasdair S.Graham and Laura Stuart in their Vauxhall Corsa. The two crews were on the same total stage times going into the final test on the McRae, only for the Escort to pick up a puncture. Graham made it safely through to pick up his third class win of the year.

Last year’s Class 3 champions Iain Haining and Mairi Riddick have had a season to forget in their distinctive Vauxhall Nova, but were back to winning ways on the McRae, with Chuck Blair and Mark Roberts finishing runners-up in their Peugeot 205GTi. On Sunday, the Dumfries crew only have to make it away from the start in Castle Douglas to confirm the overall class title.

2014 Scottish Ladies Champion Linzi Henderson from Carnwath, with Inverbervie’s Tom Hynd on the notes, will be looking to take the honours in Class 2 in her Rover ZR, but will face strong competition from local driver, Angus Lawrie, co-driven by George Myatt, in a Vauxhall Nova, who is targeting his sixth straight second-place finish.

Full event details and entry list can be found at www.gallowayhillsrally.co.uk