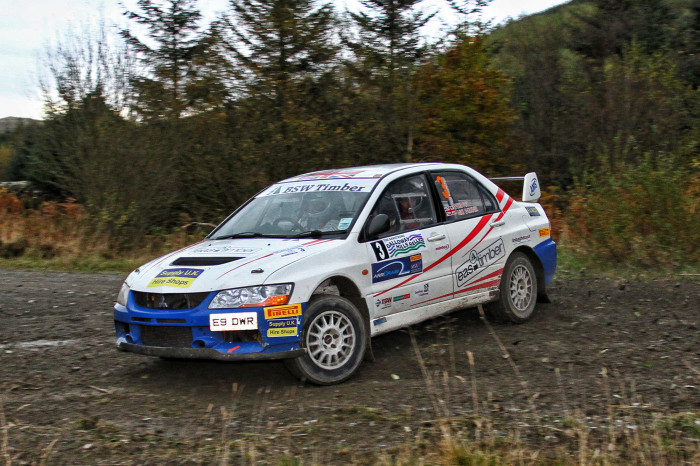 Mike Faulkner and Peter Foy returned to a champagne podium reception greeted by thousands of spectators in Llandudno as winners of the 2014 Wales Rally GB National Rally.

The BSW Timber supported crew led home an ARR Craib MSA Scottish Rally Championship podium lock out in their Mitsubishi EVO 9, winning the prestigious event by over 30 seconds from the EVO of Andrew Gallacher and Jane Nichol, with Barry Groundwater, co-driven by Neil Shanks, bringing his EVO home in third place, a further 50 seconds back.

The National event attracted an entry of almost 100 crews and supported the final round of the World Rally Championship. The crews covered the same stages as the WRC teams through north and mid Wales. A ceremonial start and firework launch in Eirias Park Stadium, Colwyn Bay, on Thursday night preceded three days of fast action.

Day 1 covered stages in mid wales, and Faulkner and Foy were on the pace with 2nd fastest through the first stage and a good run through the second stage Dyfi to move into a 1.3 second lead over Rodger Duckworth (Subaru Impreza WRC) with Ieuan Rowlands (Subaru Impreza) a further 0.4 seconds down.

Despite a broken rear suspension arm, Faulkner set a fastest stage time through Hafren Sweet Lamb 13.1 seconds up on Rowlands. Faulkner stretched the lead by a further 14 seconds in Maesnant to return to the overnight service in Deeside with a 30.5 second lead. The service crew changed the broken rear arm in service and realigned the suspension, in preparation for day 2.

Starting day 2 Faulkner and Foy set about maintaining their lead with no risks, setting a fastest time on the opening stage Clocaenog, 4 seconds up on Gallacher. On the following stage Rowlands punctured, dropping time. Gallacher’s fastest time moved him up to second 35 seconds off the lead. A fuel problem meant Faulkner couldn’t run the anti-lag but 2nd fastest time behind Gallecher was enough to maintain the lead.

With anti-lag restored they were again quickest on the final and longest forest stage of the day Dyfnant. With just the spectator stage at Chirk castle to go, the top three entertained the large crowds and stopped the clocks all within 1 second of each other.

Faulkner and Foy returned to the Deeside service park having retained the lead: “It’s been a difficult day with
lots of grip variation. You really have to work hard to try and read the surface, the fast flowing roads of Dyfnant suited us and we could really push on,” said Faulkner, as he pulled into service.

The final day comprised three stages and included two runs of the WRC live TV Stage Kimmell Park. The stages were very slippery with typical Wales Rally GB weather of low cloud and rain. A few missed heartbeats through the treacherous and very fast Brenig stage saw Faulkner and Foy retain the lead they had held since stage 2.

Speaking at the finish in Llandudno, Faulkner said: “We thoroughly enjoyed the event from start to finish, the stages were fantastic and a huge challenge with so much grip variation. Peter really had to work hard on the notes to keep me right. We worked well as a team to get this fantastic result. It was a tough three days.”

He added: “It was great to follow the WRC Crews over the podium in Wales and to have a Scottish Rally Championship 1,2, 3 made it all the more special. The “MSA Road to Wales” initiative created the idea to contest this year’s National event, and we are delighted to achieve an event win.”

For his part, Gallacher enjoyed his first outing on the Welsh event, although admitted there had been some “close calls” on the concluding stages, while Groundwater and Shanks celebrated their first finish on the national rally after two previous DNF’s.