Championship runners get set for the Granite 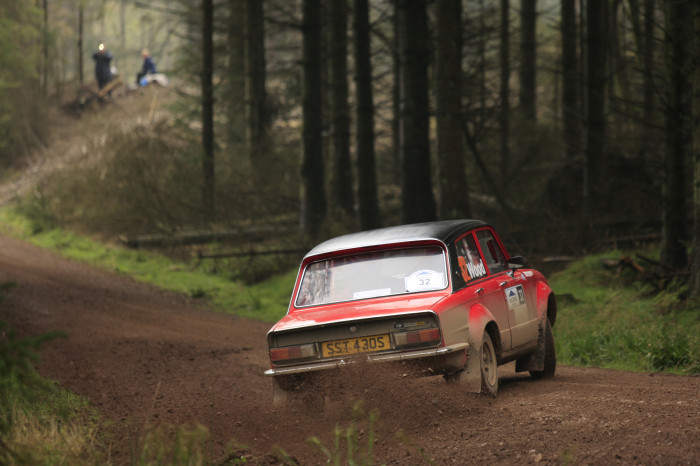 Over 100 crews will assemble at the Aberdeen & Exhibition Conference Centre for round 3 of the ARR Craib Scottish Rally Championship, the Coltel Granite City Rally on Saturday 2nd May.

A re-jigged organising team, headed by former event winner and 2006 SRC Champion Dave Weston, have resurrected the spectator-friendly stage around the car parks at the Rally HQ.  The first car is scheduled to start the first of two consecutive stages at 8:30 in the morning before heading West and South for 6 forest stages in Aberdeenshire and Kincardineshire before returning to the finish from 4pm.

Following their dominant win on round two, 5 times Scottish Champions David Bogie & Kevin Rae will lead the field away in their Fiesta R5+ looking for their 4th victory on the event, which first ran in 1968.  Although not registered in the SRC, Dave Weston Junior, with current Scottish Champion co-driver Paul Beaton alongside, will be hoping to emulate his father’s achievements by winning his local event in the Impreza WRC.

Round one winners Jock Armstrong & Paula Swinscoe will be looking to put the disappointment of retirement on round two behind them and get their championship challenge back on course in their Impreza.  Likewise, the Evo 9 of perennial Championship contenders Mike Faulkner & Peter Foy will be keen to bounce back from retirement after a monumental overnight effort to repair the car following a roll on a test the day before round 2 came to naught with broken transmission at the start of stage 3.

Mitsubishi Evo 9’s dominate the top 10 starters, with local driver Quintin Milne and Irish co-driver Stephen O’Hanlon returning to the newer model after 2 non-finishes in an older Evo 6.  With 2 solid results on the first 2 rounds, Banchory’s Bruce McCombie and co-driver Michael Coutts from Torphins start their home event with a single point lead over the similar Evo 9 of Donnie MacDonald & Andrew Falconer.

The next 4 starters – occupying 3rd to 6th overall in the championship and covered by just 4 points – are headed by Andrew Gallacher and Jane Nicol, who took their best SRC result with a 2nd place finish on the Border in the unique Fiesta-bodied Evo, followed by the Evos of Barry Groundwater/Neil Shanks, Mark McCulloch/Michael Hendry and Shaun Sinclair/Chris Hamill.  With their regular car currently en route to Barbados, Groundwater & Shanks will be let loose in the Wayne Sisson Evo 10 for the day.

In the Group N category for showroom specification cars, battle will be rejoined between the Evo 9’s of Round 2 winners Fraser Wilson/Craig Wallace and John Morrison/Pete Carstairs.  Having announced their retirement after last years Border Counties, John McClory (Strathblane) & David Hood (Johnstone) returned a year later, replacing their GpN Impreza with a GpN Evo 9.  Technology got the better of them on round 2 but the old dogs are back to try and learn some new tricks.

The top 20 starters are rounded off by the leading 2-wheel drive runners, the class 6 historic-spec. Escort of legendary Yorkshireman Steve Bannister and co-driver Louise Rae ahead of the more modified version of Keith Robathan, who will have fellow rapid Escort pilot Calum Mackenzie reading the notes.  A few places further back, Greg & Chris McKnight (Thornhill), having replaced the 1600 engine which expired on round 2 with a 2-litre version in their similar car, will be hoping for some reliability to go with their undoubted pace.

Current class 6 leaders ahead of Bannister/Rae, Alford’s Willie Stuart and former SRC champion Neil Ewing from Largs will be hoping to build on their excellent start to the season in their BDA-engined Mk1.

After 2 class wins on the first 2 rounds, the 2-litre Honda Civic of Ross MacDonald & Matthew Johnstone from Inverness currently leads the 2-wheel drive standings, but will have the newer version of Graeme Schoneville (Bothwell) & Stuart Loudon (Garrion) to contend with in class 7 this time round, the latter another looking for some reliability after a difficult first year in the car in 2014.

In class 9, battle will be rejoined between the BMW of Stewarton’s Robert Harkness & Mike Curry from Lockerbie and the V6-engined Dolomite Sprint of Insch’s former SRC Champion Ken Wood and new Irish co-driver Paul Cummins.

There are only a couple of starters in class 5, the Mk2 of round 1 winners Duncan MacDonald & Neil Ross from Portree joined on this occasion by another Escort in the hands of Ally & Del Galbraith from Lochgilphead.

With Greg & Chris McKnight moving up to class 8, the battle for class 4 honours is likely to be fought among a host of front wheel drive 1600 cars.  Snowman class winners Alnwick’s Carl & Rob Tuer lost their ex-Gwyndaf Evans MG S1600 to a fire on the eve of the Border but return to the championship in a Ford Fiesta R200.  They will start in front of the Nova of round 2 winner Scott MacBeth (Rosemarkie) and Callum Atkinson (Lauder) with current class leaders Alex Curran (Newton Stewart) & Heather Grisedale (Grange-over-Sands) next up in their Corsa.  After a difficult start to the season in their new Corsa, Angus Lawrie (Castle Douglas) & George Myatt (Dumfries) will be hoping to mix it with the front runners.  The Granite also marks the first forest rally for Murray Coulthard – nephew of former F1 racer David – in a Citroen C2R2 Max.

In class 3, round 1 winners Scott Beattie & Fraser Gellan (Alford) are back out on their local event, only the second forest rally for the crew in the ex-Willie Stuart Talbot Sunbeam, while fellow locals and round 2 winners Simon Hay (Aberdeen) & Calum Jaffray (Torphins) will be chasing more SRC and Ecosse 205 Challenge points in their 205.  Donald & Scott Peacock (Bridge of Dee) were tied with their fellow 205 runners going into the final stage on the Border Counties but were forced to retire with engine problems.  Some midnight oil-burning will be going on in the South West this week to fit a new engine before the father & son crew head into battle once more.  Former Junior 1000 front runner Michael Dickie from Banchory will be tackling his first forest event in the ex-Iain Haining Vauxhall Nova with Laura Marshall (Newton Stewart) tasked with guiding him safely through his local forests.

In class 2, Ryan Weston will be eyeing up some more giant-killing in his 1400cc engined Proton Satria while current class leader Tore’s Thomas Gray will be happy with another reliable run in his rather more standard 1300cc Toyota Yaris.

Finally, 2 crews will be vying for class 1 honours.  Fresh from their class victory on the Borders, Andy Struthers (Liberton) & Pete Weall (Lenzie) are out once again in their borrowed Citroen C2, and this time they will have the Peugeot 106 of wife and husband crew Sue & Tom Hynd (Inverbervie) for company, Tom having very generously built the car for experienced co-driver Sue to tackle her first forest event as a driver.

Full entry list and event details can be found at www.granitecityrally.co.uk.