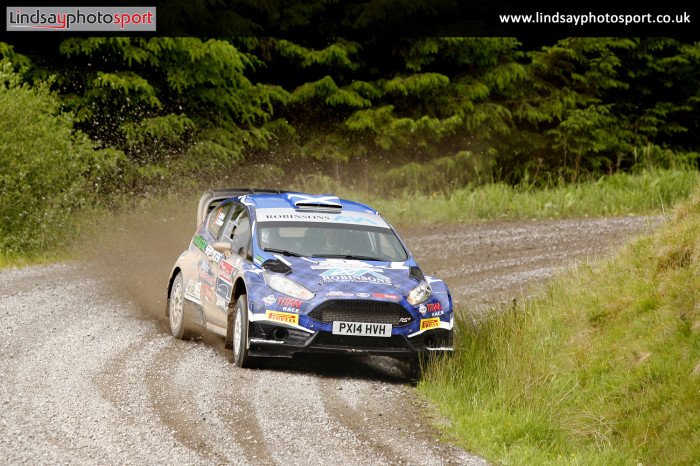 Local drivers dominated the 70th running of the Scottish Rally as local hero David Bogie and Hawick co-driver Kevin Rae recorded their 3rd SRC victory of the year in their Ford Fiesta R5+, winning David’s home event for the 2nd year in succession and the 4th time in total following a dominant drive over the 7 stages.

Heavy overnight rain meant that the first few stages of the day were slippier than expected for the time of year but some ‘traditional’ Scottish dust returned over the final stages.

Castle Douglas’s Jock Armstrong and Paula Swinscoe from Withnell kept up their championship challenge by bringing their Impreza home in 2nd place ahead of local Rory Young & Brampton’s Allan Cathers who posted their best ever result in the Scottish Championship in their hired Fiesta R5.  Just missing a podium place by 2 seconds after a day long battle with the Fiesta crew was nonetheless another excellent result for the older Mitsubishi Evo 5 of Gretna’s Steven Clark and Chris Williams.

Aberdeenshire’s  Bruce McCombie/Michael Coutts continue to lead the championship but have seen their lead eroded further after recording their lowest finishing position of the year in 7th place overall.  Armstrong/Swinscoe have closed the gap to the leaders while Kirtlebridge resident Mike Faulkner and Bingley’s Peter Foy retain 3rd overall with an excellent recovery drive from 25th to 5th place following a first stage puncture in their Mitsubishi Evo 9.

The Inverness crew of Donnie Macdonald/Andrew Falconer were particularly frustrated to have lost out on 5th place to the similar car of Faulkner & Foy on the final stage.  7th overall is not where they would have hoped to be at this point in the championship but their campaign was rather blunted with 2 non-scores on rounds 3 and 4.

Although rather disappointed with their pace throughout the day, Oban pairing Shaun Sinclair/ Chris Hamill nevertheless posted another top 10 result, moving up to 4th overall in their Mitsubishi Evo 9 following the retirement of both Stonehaven’s Barry Groundwater whose Evo 10 slid off the road on the first stage and the Evo 9 of Newton Stewart’s Mark McCulloch and Elgin’s Michael Hendry.

Hawick’s Ian Baumgart & Mike Dickson from Duns battled back from a first stage spin and a couple of punctures to maintain their 100% finishing record and move up to 6th overall in the championship standings in their 20 year old Impreza.

Current Group N Championship leaders Fraser Wilson from Port William and Kirriemuir’s Craig Wallace looked to be heading for their third class 10 win of the season and an overall placing well inside the top 10 until their Evo 9 slid off the road and got stuck on the edge of a culvert on the penultimate stage.  This left the way clear for the similar car of Conon-Bridge’s John Morrison and Peter Carstairs from St. Andrews to take their 1st class win of the season and move to the top of the class and Group N standings.

In his first season of rallying and only his 2nd event in an Evo 9, Aberdeen’s John Wink recorded his best finish of the season in 14th place and now lies 8th overall with 5 scores out of 5.

One of the drives of the day came from local crew Greg & Chris McKnight who took top 2 wheel drive honours, finishing 11th overall and 9th SRC crew in their 2-litre class 8 Mk2 Escort, one place ahead of the historic Mk2 of legendary Yorkshireman Steve Bannister and co-driver Louise Rae.

Recording their first class 9 win since the opening round kept the BMW 316i of Stewarton’s Robert Harkness and Lockerbie’s Mike Curry in touch with the ever-reliable BMW 120 of current leaders Donald & Rachel Brooker from Ballater, but with 2 dropped scores already the reigning class champions can’t afford another non-finish.

Newton Stewart’s Alex Curran and Heather Grisedale from Grange over Sands took their 1600 Corsa to a 2nd successive class 4 win, maintaining their 100% finishing record and consolidating their class lead after nearest class rival Scott Macbeth’s Nova was forced to retire in 2nd service with a holed gearbox.  On only his 2nd ever forest event, Murray Coulthard finished 2nd in class in his Citroen C2R2 Max, finishing 37th from a start number of 77.

Bridge of Dee father and son crew Donald & Scott Peacock recorded their 2nd class 3 win of the season ahead of fellow Peugeot 205 Challenge competitors Simon Hay/CalumJaffray from Aberdeen, although the latter still enjoys a healthy lead in the championship having scored points on all the rounds so far.

In his first season in the woods, Junior Thomas Gray made the long trip south from Muir of Ord worthwhile and recorded another first by wrapping up the class 2 championship in his 1300cc Toyota Yaris following his 3rd successive win and 4th in total.

SRC Junior driver Caroline Carslaw took her 2nd class 7 win of the season with John Duke alongside in their 2-litre Ford Fiesta.  In addition to winning the trophy for 1st lady driver on the event, Caroline also picked up a free entry into the National rally at Wales Rally GB in November.

Fuel pump issues on the first stage scuppered Sue & Tom Hynd’s chances of recording their 3rd class 1 win in their Peugeot 106.  Running with the Landrovers at the back of the field, their day ended when the wee car slid off the road backwards down a banking in stage 5.  All of which left the Citroen C2 of Andy Struthers to take his 2nd class win of the season and stretch his lead at the top of the class standings.

Provisional Championship positions after Round 5:

Final results and more news are available from the championship website at www.scottishrallychampionship.co.uk.

Entries are now open for the 6th round of the 2015 ARR Craib MSA Scottish Rally Championship, the McDonald & Munro Speyside Stages, based in Elgin on Saturday 1st August.  Details on the event web site at www.speyside-stages.co.uk.