3 Still in Contention Going into Final Round 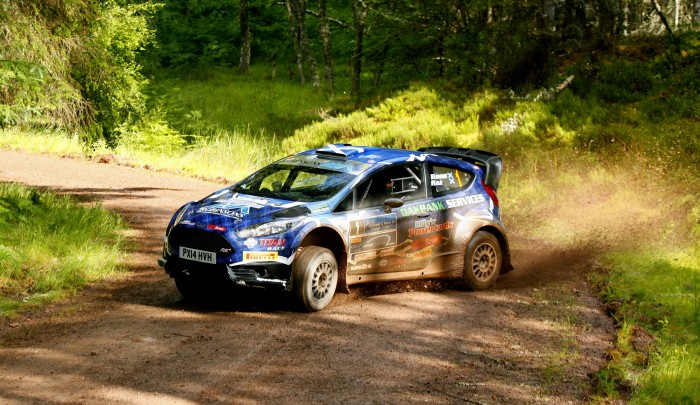 David Bogie/Kevin Rae took their 7th victory on the penultimate round of the ARR Craib MSA Scottish Rally Championship, the Speyside Stages, although other results confirmed that another championship is now out of reach and therefore ensures that we will have a first time winner of both driver and co-driver overall titles.

Despite losing time with several overshoots throughout the day they finished comfortably ahead of the Impreza of Jock Armstrong/Paula Swinscoe who nevertheless strengthened their challenge to win their first championship title with their 4th second place finish in a row.

Inverness crew Donnie McDonald/Andrew Falconer took their 2nd podium finish of the season in their Evo 9 just 4 seconds ahead of the similar car of Bruce McCombie/Michael Coutts who continue to maintain a healthy lead in the championship after 6 successive top 10 finishes. However, with a dropped score now coming into play on the final round they need to rely on others to have problems to take the title.

Mike Faulkner/Peter Foy recovered from a broken driveshaft on stage 2 and a time-consuming overshoot on stage 7 to finish 5th overall and retain an albeit outside chance of taking the championship for the first time, although they are confirmed as class 11 champions.

Mark McCulloch/Michael Hendry were rewarded with a hard-fought 6th place, surviving a recurrence of a rear brake issue midway through the day which had left them with no rear brakes to bounce back after retiring on the previous round.

Shaun Sinclair had successfully persuaded Brian Watson to let him use the Mitsubishi WRC car which he seemed much happier with, although he ultimately dropped down a place after suffering a misfire and fuel surge problems late in the day. Still in 5th place overall in the championship. 2nd remains within reach although this would be dependent on those ahead slipping up on the final round.

Barry Groundwater had Sean Donnelly in the hot seat, successfully getting some more stage mileage in the Wayne Sisson Evo 10 on their way to another 8th place finish, only a couple of seconds ahead of the Andy Horne/Jim Howie Focus WRC.

Fraser Wilson/Craig Wallace were pleased to make the top 10, taking top Group N and class 10 honours for the 3rd time this season in their Evo 9. However, their 2nd retirement of the season after a slow-motion off on the previous round leaves them with only an outside chance of pipping the similar car of John Morrison/Peter Carstairs to both championship titles at the end of the season.

Just missing out on a much sought after top 10 placing but picking up his best result of the season was Scott McCombie who had the services of a new co-driver for the Speyside in the form of Mark Fisher.

The Impreza of Ian Baumgart/Mike Dickson and the Evo 9 of John Wink maintained their 100% scoring record, 17th and 12th respectively retaining their places in the overall top 10 championship standings going into the final round.
Legendary Yorkshire driver Steve Bannister, with the help of stand-in co-driver Dave Robson, finished 13th, taking his historic Mk2 Escort to his 4th 2 wheel drive win of the season ahead of the class 8 winning Mk2 of Greg & Chris McKnight’s. Steve has now wrapped up another 2 Wheel Drive championship title with a round to spare, although the battle for top co-driver remains to be decided in the absence of Steve’s regular co-driver Louise Rae on the Speyside.

Despite being forced to miss the Speyside when his own car was not ready in time, Andy Struthers nevertheless wrapped up class 1 when nearest rivals Sue & Tom Hynd slid their Peugeot 106 off the road into retirement on the 2nd forest stage.

Thomas Gray continued his dominant run in his 1300 Toyota Yaris to take his 5th class 2 win of the season.
Donald & Scott Peacock’s 3rd class win of the season kept their hopes of winning the Ecosse 205 challenge alive, particularly after the first retirement of the season for class 3 winners Simon Hay/Calum Jaffray.

Colin Grant took his first class 4 win of the season after his first trouble-free run of the year in his 1600 Mk2 Escort. After a trip to a forest ditch, Alex Curran/Heather Grisedale finished 2nd, their 6th score of the year meaning they too have now wrapped up a championship class win.

On their first outing since the Snowman, John O’Kane/George Finlayson were victorious in class 5 in their Mk2 Escort, ahead of a relieved Andy Chalmers/Martin Maccabe who were rewarded with a finish first time out in their similar car after season-long frustrations and retirements in their 205 saw them buying the Escort immediately after the Scottish.

After their 2nd non-finish of the season on the Scottish, Ross Macdonald/Matthew Johnstone knew they needed to win class 7 on the final 2 rounds to grab the title from the Fiesta of Caroline Carslaw/John Duke. They duly completed the first part of that equation with a problem-free controlled run in their Honda Civic.

Dougal Brown/Lewis Rochford made their first appearance in a new 2-litre Mk2 Escort, taking 2nd in the class after a day of Dougal reacquainting himself with rear wheel drive motoring.

Following the 3rd retirement of the season of the BMW 318 of nearest class rivals Robert Harkness/Mike Curry, Donald & Rachel Brooker were confirmed as class 9 champions in their pretty standard BMW 130i.

Final results and more news are available from the championship website at www.scottishrallychampionship.co.uk.

Entries will open shortly for the 7th and final round of the 2015 ARR Craib MSA Scottish Rally Championship, the Colin McRae Forest Stages, based in Perth on Saturday/Sunday 3rd/4th October. Details on the event web site at www.coltnesscarclub.com.