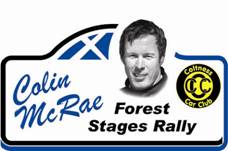 It is with deep regret that Coltness Car Club has announced the cancellation of the 2015 Colin McRae Forest Stages Rally which was scheduled to run in Perthshire on the weekend of the 3rd/4th October.

The number of entries received for this final round of the ARR Craib MSA Scottish Rally Championship fell far short of the break-even point and as an amateur car club, the club was faced with a financial shortfall which would have been unmanageable.

Club chairman Jim Brown said: “It was a difficult decision, and yet an easy decision, as we didn’t have any choice. It all boiled down to a simple question of economics, not enough paid entries had been received to make the event viable which would have incurred heavy and unaffordable losses for the club.”

“It’s a great pity, months of intense work and preparation by a small band of dedicated enthusiasts have gone unfulfilled. And it’s not just our club, rally clubs across Scotland have faced difficult decisions this past year.”

“At the end of the day we really had no choice. Coltness Car Club is an amateur organisation and if an event does not pay its way then it simply cannot be run.”

He concluded: “It’s a great pity, it’s not just the competitors who will lose out, or the championship, but all those spectators and rally fans who will be denied the chance to see and cheer their heroes on the final round of this national championship competition. The club would also like to apologise to all those affected by this unavoidable decision.”

Note: The previous round, and penultimate event, in the original eight round 2015 Scottish Rally Championship scheduled to run on the 5th of September was also cancelled. That means this year’s competition will be decided over the six rounds which have already taken place.

A provisional set of final championship points are being calculated, and will be issued over the coming weekend