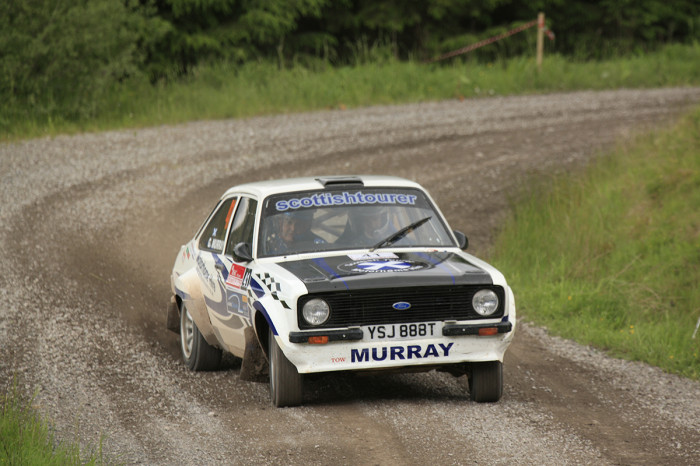 The 2016 ARR Craib Scottish Rally Championship returns this weekend after almost a 2 month break as the series heads to Dumfries for round 4 of the championship, the RSAC Scottish Rally.

The BRC and SRC double header has attracted a full entry list of 120 cars, ranging from ultra-competitive and modern R5 cars from Ford, Skoda, Peugeot and Citroen to 1400cc small hatchbacks.

Many of the class championships are finely poised at the half way stage, with the battle set to rage on in the 65 competitive miles that lie ahead of the crews.

The class 2 battle is once again headed by class leader Angus Lawrie from nearby Castle Douglas with Annan’s Paul Gribben alongside. Lawrie won the opening two rounds in his Vauxhall Corsa 1400 but failed to finish on the Speyside, meaning he’ll be looking to get his season back on track on the Scottish.

Dumfries’ Niall Cowan Jr (MG ZR) and Portree’s Grant MacRae (Peugeot 205) will be taking the battle to Lawrie on round 4.

Class 3 for 1450-1650cc engine vehicles is headed by Donald and Scott Peacock from Bridge of Dee in their Peugeot 205 GTI. The pair sit 5 points behind the similar 205 of Luke McLaren and Phil Kenny in the championship, so will be looking to overturn that deficit.

Robbie Beattie from Dundee and David Finlay from Blairgowrie join the battle in their Peugeot following a class win on the previous round.

Penpont’s Jim Robertson and Dumfries’ Colin Maxwell head the class 4 fight on the Scottish in their Citroen C2, with class rivals Murray Coulthard and John Frew just behind on the road in their similar Citroen.

John McIlwraith from Canonbie and Scott Young from Duns are poised to scrap for class 5 honours with Andy Chalmers from Fyvie and Martin MacCabe from Glasgow in their Mk2 Ford Escorts.

McIlwraith won the Border Counties and the Speyside but didn’t start the Snowman meaning Chalmers holds an 8 point advantage in the class 5 championship standings.

Brechin’s Ian Milne is the only SRC registered driver in class 6 for historic cars with his Ford Escort Mk2, but has the opportunity to compare his times with other class 6 runners in Escorts, Talbot Sunbeams and Fiat 131s.

2015 Ladies Champion and Class 7 championship leader Caroline Carslaw will once again be out on the Scottish in her Ford Fiesta ST, with the only other registered crew being Kevin Gray from Invergordon’s Vauxhall Astra with Daniel Christie on the notes.

The class 8 battle has been one of the most scintillating over the first segment of 2016, and on the Scottish the pack will be led by points leaders Grant Inglis and Robert Gray from Glasgow in their Ford Escort Mk2.

Providing opposition for Inglis and Gray are Portree pair Duncan MacDonald and Neil Ross in a similar Escort, with Keith Seager and Mark Runciman looking to close the gap to Inglis and Gray in the points table with their BMW 318i Compact.

Class 9 for larger engine two wheel drive cars is headed by Gordon Murray from Perth and David O’Brien from Duns in their 2.3 litre Escort Mk2, who face competition from runaway class leaders Donald and Rachel Brooker in their BMW 130i. Brooker will be looking to bounce back from a non-finish on the Speyside.

The battle within class 10 is definitely one to watch, with just one point in it between Alasdair Graham and Fraser Wilson, who have a class win apiece this season.

After missing the Speyside, John Morrison and Peter Carstairs are back in their Mitsubishi Lancer Evolution IX, scoring both SRC and BRC National Cup points.

The contest within the SRC Challengers is set to be as hot as ever, with all of the title favourites competing on the Scottish.

The points leaders after three rallies are Huntly’s John Wink and Inverurie’s John Forrest, with the Evo IX crew coming second on the Snowman and winning the Border Counties.

However, the competition from fellow Evo IX drivers Alasdair Graham, Ross MacDonald and Scott McCombie has been strong to say the least meaning the battle is wide open for victory on the 65 miles of the Scottish Rally.

Scott Mutch from Elgin with Greg McDonald alongside are definitely ones to watch in their GC8 specification Subaru Impreza, as is Freddie Milne who is on the back of a strong seventh place finish on the recent DMACK Carlisle Stages.

The www.usedcarparts.co.uk Subaru Cup for older specification GC8 Subaru Impreza’s was introduced for 2016 and has served up some great battles between the classic machines.

Elgin driver Scott Mutch heads the standings heading to Dumfries after two class victories, but Inverurie duo Matthew Thomson and Ian Graham are not to be discounted, while Drew MacDonald has been in the mix too.