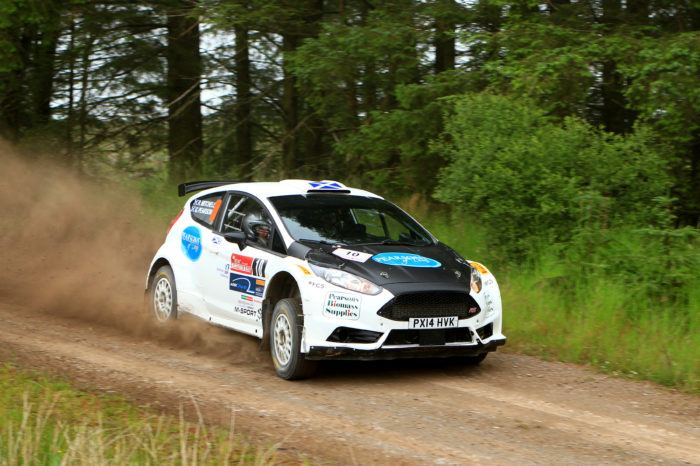 Garry Pearson and Robbie Mitchell took their second consecutive victory of the year on
round 4 of the 2016 ARR Craib Scottish Rally Championship, the RSAC Scottish Rally.

The competitors were faced with an extra 20 competitive miles due to the fact they were
sharing the stages with the drivers from the MSA British Rally Championship for the first
time in two years.

Duns crew Pearson and Mitchell took the SRC win by just under 10 seconds on stages that
were mostly dry but increasingly slippery in the afternoon. Pearson spun his Fiesta R5 on
the opening test, Twiglees, which lost him 20 seconds, but some blisteringly quick stage
times in late morning and early afternoon saw him clinch the SRC win come the finish in
Dumfries.

Garry said: “We’re delighted to be here, especially after the spin. After that we managed to
pull forward and then manage the gap so we’re very happy. Not an easy one though.”

A sump guard fitted to the bottom of the Impreza to cope with the rough stages in the
forests around Dumfries melted the exhaust, trapping the heat into the cockpit, which saw
the Castle Douglas driver bathed in sweat after the stages.

The boys in service at Heathhall drilled holes into the sump to cope with the problem, but
Armstrong couldn’t close the gap to Pearson and Mitchell in front.

He said: “It’s been an ok rally, had highs and lows but that’s how it goes. Mike [Faulkner]
has had a good day, coming very close but we’ll need to do something if we want to beat
Garry [Pearson]!”

Mike Faulkner and Peter Foy were the star performers of the rally, taking their second
consecutive third place finish in what was the same podium as the Speyside Stages two
months ago.

Faulkner once again hustled everything he could from his Mitsubishi Lancer Evolution IX,
but on the Scottish it really paid dividends as he came mightily close to overhauling Jock
Armstrong on the final test, Mount Joe, in the end finishing a mere 0.9 seconds behind
overall.

Mike was on the pace from the get go, but spun on a bridge in the second loop of tests
which ultimately saw him having to settle for third place in a performance much more like
the Faulkner we have seen over the years.

He said: “The pace was right, the car was right but there were still these niggling little things
we need to sort out. We tried hard, drove very well but made some mistakes. It’s frustrating
as we came very close [to Jock].”

The battle for fourth, fifth and sixth places was an intriguing one all day with the Mitsubishi
Lancers of Mark McCulloch and Bruce McCombie battling Rory Young’s Fiesta R5.

Local boy Mark McCulloch with Michael Hendry achieved two of his pre-event ambitions to
finish the rally and achieve a good result for his championship with fourth overall.

After suffering teething issues with his new Evo in the first half of the year, McCulloch found
the car “spot on” and it showed in his stage times, as he took twelfth overall in the
standings.

Despite feeling he was too cautious in Twiglees and suffering a puncture for half of the
stage, he finished just over 10 seconds behind BRC runner Matt Edwards in a similar car.

With fourth McCulloch maintains third place in the championship.

Young made his first appearance of the season on the Scottish, and was proving he had lost
none of the speed that saw him clinch a podium finish on the event 12 months ago.

At the end, Rory finished just 1.3 seconds behind McCulloch’s Mitsubishi in the epic battle
for fourth, but if it weren’t for a 20 second penalty for leaving the first service a little too
late, he would have taken fourth.

Bruce McCombie and Michael Coutts lost out in the battle for fourth but took a welldeserved sixth place in the SRC after another consistent performance.

The Banchory driver was, in his own words, “not quick enough” at the start of the day but
did enough to stay in touch with those ahead of him and maintain a good points finish for
the championship.

Barry Groundwater and Sean Donnelly took seventh on the Scottish rally in their Mitsubishi
Lancer Evolution X, 20 seconds ahead of Scott McCombie and Mark Fisher’s Evo IX who
revitalised their season after a disappointing couple of events.

Just four seconds back was the Subaru of Ian Baumgart from Hawick and Mike Dickson from
Galashiels.

They finished just 0.8 seconds ahead of Inverness duo Donnie MacDonald and Andrew
Falconer who battled brake problems throughout the event, leading them to concentrate
primarily on their BRC National Cup push after another disappointing SRC result for the
winners of round 1.

Alasdair Graham finished 11th in his Mitsubishi Lancer Evolution IX, another good result for
his Class 10 and Challengers aspirations.

Brian Watson (Stonehaven) and Iain Wilson (Dalbeattie) were separated by a slender 0.7
seconds after 7 special stages, taking home best results of the season of 12th and 13th
respectively.

There was a scary moment for Fraser Wilson who rolled his Mitsubishi on SS4, whilst
Andrew Gallacher retired from a strong points scoring position on the final stage.

Shaun Sinclair had another troublesome rally in his Subaru Impreza WRC, suffering a
puncture on the opening test and then cutting a corner result in driveshaft issues on the
second. He eventually retired on the final stage with clutch woes.

He provided quote of the rally at the end of SS5, saying “When you start enjoying your
breakdowns you know you’ve made it.”

2014 Scottish Champion Euan Thorburn claimed fourth whilst 2009, 10, 11, 12 and 13
Champion David Bogie was all set to take second but to retire after the end of the final
stage with radiator damage.

After four rounds of the series, Garry Pearson still heads the championship from current
champion Jock Armstrong, with the impressive Mark McCulloch holding onto third with just
two rallies to go.

The next event on the 2016 ARR Craib Scottish Rally Championship calendar is the Coltel
Grampian Stages on 13 August, based in Aberdeen.