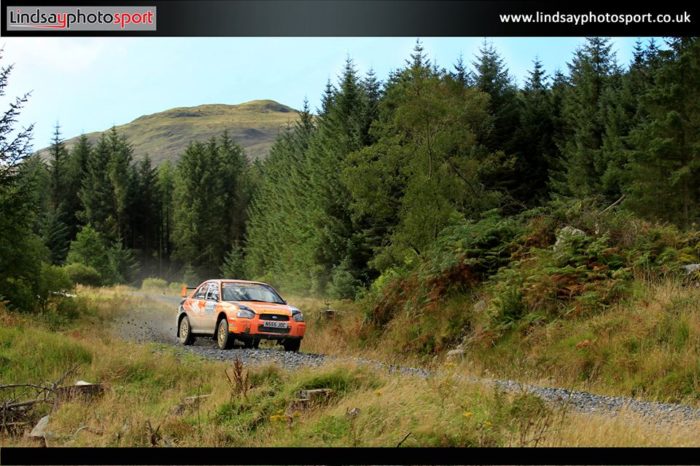 The 2016 ARR Craib MSA Scottish Rally Championship reached its conclusion on the Armstrong Galloway Hills Rally on 10 September, and it was defending champion Jock Armstrong who took his second consecutive Scottish Championship title.

The rally, based in Armstrong’s home town of Castle Douglas, took in 42 competitive stage miles in the Dumfries & Galloway forests, and was the sixth and final round of the 2016 Scottish Rally Championship.

Garry Pearson (Ford Fiesta R5) and Jock Armstrong (Subaru Impreza) headed to the south-west event 3 points apart in the Duns driver’s favour, and the battle lived up to the hype with the pair being separated by just seven seconds after the first batch of stages.

Pearson was understandably the happier after the first loop, with Armstrong looking rather subdued, vowing to do all he could to stop the R5 driver.

Tantalisingly the final test of the entire season, SS6, would ultimately prove decisive in who would be crowned the 2016 Scottish Rally Champion.

Armstrong held the lead but second for Pearson would be enough for him to win his first ever SRC title, but cruelly for Garry and co-driver Robbie Mitchell, their Fiesta which never let them down all year decided enough was enough, with the engine manifold breaking and melting the rocker cover in the M-Sport machine.

Jock, co-driven by Paula Swinscoe, was left unchallenged at the top of the leaderboard to take his eight win on the Galloway Hills Rally and his second consecutive Scottish title.

At the finish in Castle Douglas, the now double champion said: “It’s quite a nice feeling to be called a two-time Scottish Champion!

“It’s been pretty hard today and in fact all year with Garry, it’s been a good battle and it’s just a shame today he’s gone out with reliability problems, but to get the championship you’ve got to complete all the rounds.

“It’s been a fantastic pace today, had a really brilliant day despite a few moments but they’re nothing I can’t correct for next year.”

The new champion also promised he would be celebrating in style.

“I’ve got a party planned down the street; there’ll be plenty drink and if you want to eat, which is cheating, you can have something to eat as well!”

After Pearson’s demise before the final stage, everybody behind moved up a place, meaning Wigton driver Mike Faulkner and co-driver Peter Foy claimed a season best second overall in their Mitsubishi Lancer Evolution IX.

Mike was once again absolutely on it in the forests, and another podium was the perfect way to round off his 2016 season.

At the end of SS6, Faulkner said: “It’s been good, nice stages today and we’ve finished best of the rest, which is the best we can do. It’s good to be on the podium.”

Coming home third and delivering on his promise of a podium before the season was out was local man Mark McCulloch with co-driver Michael Hendry in his Mitsubishi Lancer Evolution IX.

McCulloch had a relatively slow start after taking a while to “wake up” following late dramas prior to the event with the Mitsubishi misfiring and then suffering from a faulty injector, but he started to eat away at Faulkner’s advantage after service to finish just 11 seconds back in third.

Mark said at the end of the final stage: “This afternoon’s been great, we’ve just missed out on beating Mike. We lost out this morning but I couldn’t have gone any harder. It was a good day.”

Bruce McCombie and Michael Coutts had another good day in the office on the Galloway Hills, grabbing fifth overall and fourth SRC crew at the finish.

It was a typical McCombie performance, netting a solid points scoring finish but being a little further from the front running pace than the Banchory driver would like.

McCombie said: “We weren’t quite so on it, maybe a bit too erratic trying too hard but we’ve enjoyed the stages and enjoyed the day.”

Andrew Gallacher and Jane Nicol missed the previous round up in Aberdeenshire, but returned for the final round of the season in an ex-Carlos Sainz Ford Focus WRC.

The Hurlford driver took his time to bed into the car after competing in a Mitsubishi Lancer Evolution VIII this season, but fifth was a season best result for him and his Edinburgh co-driver.

Gallacher said: “It’s been good, a good event in general. We stalled it a couple of times on the first and fifth stage, we were trying to get a hang of the launch control but overall no problems.

“I’ve enjoyed driving the car, Jane’s probably taken a few more cuts than she should have!”

Quintin Milne and Sean Donnelly were back out in their Ford Escort Mk2, and took a fantastic sixth in the championship and seventh overall, just 11 seconds behind Andrew Gallacher’s WRC Focus.

The former SRC event winner had a solid day with no real problems to come home as top 2WD crew.

Grabbing a sensational seventh in the championship was Cornhill driver Michael Binnie and the experienced Duns co-driver Claire Mole in their older Mitsubishi Lancer Evolution V.

Binnie is a relative newcomer to the rallying game, but his performance on the Galloway Hills certainly belied that as he took his first ever top 10 finish in tenth overall and with it the win in the SRC Challengers category.

That denied local Dalbeattie driver Iain Wilson and Haugh of Urr co-driver Keith Riddick their first Challengers win as they once again had to settle for second following their runner-up spot on the previous round.

The Subaru Impreza driver was very happy with the feeling of his car on the event, seeing him as high as eighth overall at the midday service break, but ultimately Wilson missed out on the Challengers win by a mere 4 seconds.

Alasdair Graham took ninth in his Evo IX with Alford co-driver Laura Stuart alongside. The duo once again took the Group N win, sealing that particular championship, but losing out on the Challengers trophy which went to Scott McCombie and Mark Fisher, despite the pair having a difficult day as they struggled for pace.

Rounding out the SRC top 10 was Hawick driver Ian Baumgart and Galashiels co-driver Mike Dickson in their Subaru Impreza, just 2 seconds ahead of McCombie and Fisher’s Evo IX.

Following his maiden SRC win on the Grampian, a lot was expected of John MacCrone and stand-in co-driver Stuart Loudon on the Galloway Hills.

The event started well, with the Waterman’s backed Fiesta R5 claiming the second fastest time behind eventual champions Armstrong and Swinscoe on the day’s opening stage, but MacCrone wouldn’t make it out of SS2 a damaged wheel saw his MSL Motorsport Fiesta off the road, in a ditch and pointing the wrong way.

After over 200 competitive stage miles, the 2016 ARR Craib MSA Scottish Rally Championship came down to the final stage of the final event, proving just what a competitive and exciting championship the SRC is.

Jock Armstrong may have ultimately come out on top, but flashes of brilliance from John MacCrone and an incredible season from Garry Pearson in his first season’s rallying in a four wheel drive car prove the 2017 SRC season is one not to miss.