Championships settled up and down the field 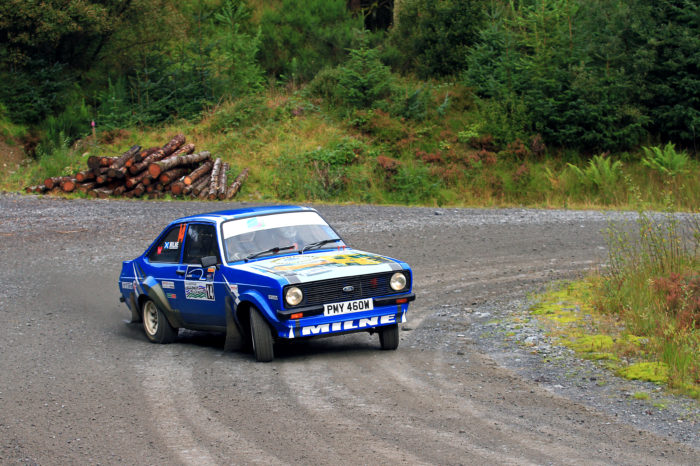 The 2016 ARR Craib MSA Scottish Rally Championship has been one of the most memorable seasons of rallying in recent years with battle aplenty up and down the field.

The season reached its conclusion on the sixth and final round, the Armstrong Galloway Hills Rally based in Castle Douglas.

Several of the class championships hung in the balance heading into the 40 mile event, so it was all to play for on the gravel forest tracks in Dumfries & Galloway.

Libberton driver Andy Struthers and Jedburgh co-driver Alasdair McIlroy took the class 1 honours in their Citroen C2, as the only starters and finishers in the class. Their little Citroen came home 64th overall, eight places ahead of their seeding.

Class 2 was won by home hero Angus Lawrie and Annan co-driver Paul Gribben in their 1400 Vauxhall Corsa. Lawrie’s class win was enough to seal him the class 2 championship ahead of young Grant MacRae (Portree) and Martin Bruce (Portree) in their Peugeot 205.

Carluke’s Ross Carbry finished the season third in the points in his Corsa, but ended the Galloway Hills off the road on SS5.

The class 3 battle was definitely one to watch heading into the final round of the season, with the 205-infested class producing some great battles throughout the year.

Dundee driver Robbie Beattie and Blairgowrie co-driver David Findlay took the class win on the Galloway Hills, ahead of Bridge of Dee’s Donald and Scott Peacock.

Second on event was enough for Donald Peacock to take the class championship, with former contender Luke McLaren also moving up to class 7 from round 5 onwards.

Class 4 has increasingly been controlled by Tore’s Thomas Gray with the experienced Dave Robson (Jedburgh) in the co-drivers’ seat of the Ford Fiesta R2, and Gray duly took the class win and the championship on the final rally of the season.

Murray Coulthard and John Frew brought their Citroen C2 home second at the finish with Lanark driver Ross Hughes impressing with third in class in his C2. The more experienced pairing of Jim Robertson and Colin Maxwell were just three seconds back in a third C2.

However that result was enough for the Penpont driver to take second in the class championship, with David Martin sealing third.

Class 5 was another tight affair heading to the Galloway Hills, with 1 point splitting the two top drivers at the close of play.

Ironically neither of the title contenders, John McIlwraith (Canonbie) and Andy Chalmers (Fyvie) made it to the finish in their Mk2 Ford Escorts, and with none of the other contenders starting no class 5 machines completed the Armstrong Galloway Hills Rally.

However, it was Chalmers and Glaswegian co-driver Martin Maccabe who took the championship with 62 points ahead of McIlwraith and Scott Young (Duns) on 61.

The class 6 championship had already been wrapped up by Alex Ian Milne (Brechin) ahead of the Hills, but it was Malton potato farmer Steve Bannister who took the win with Lauder’s Callum Atkinson co-driving.

Milne made the finish fifth in class in his Escort but still top of the SRC registered competitors in 55th overall.

Class 7 was yet another class battle that was going down to the wire on the Galloway Hills, but it was the class newcomer Luke McLaren (Blanefield) and Phil Kenny (Sunderland) who grabbed their first victory since upgrading from their 205 to the Ford Fiesta.

Second in class in another Fiesta was enough for Caroline Carslaw (Dunlop) to take the championship, backing up her Ladies title last year with more silverware. Ross Williams (Tobermory) co-drove her to second in class and 59th overall on the Galloway Hills.

Kevin Gray (Invergordon) and Daniel Christie (Insch) were looking to challenge Carslaw for class 7 honours in their Vauxhall Astra but in the end had to settle for runners-up in the points and third place on the event.

Class 8 has seen a variety of different winners and stand-out performers in 2016 thanks to a few drivers only committing to a selected number of events.

On the Galloway Hills it was Banchory showman Quintin Milne who took the class win with Elgin’s Sean Donnelly the brave man in the co-drivers’ seat. Milne guided his Mk2 Escort to a fantastic seventh overall, proving the pace the older machine still has.

Grant Inglis (Glasgow) and Robert Gray returned to form after a difficult couple of events to snatch second in class and with it the 2016 Class 8 Championship.

The Escort pair edged out Keith Seager (Hamilton) and Mark Runciman (East Kilbride) in their BMW 318Ti Compact, who took a solid third in class and second in the championship ahead of Duncan MacDonald who suffered mechanical failure on the Galloway Hills.

The only SRC registered crew in class 9 on the sixth round of the championship were Gordon Murray (Perth) and David O’Brien (Duns) in their large engine Escort Mk2.

The duo were hunting a third successive class victory but it wasn’t to be as they wouldn’t make it to the end of the second special stage.

Irish driver Seamus O’Connell took the overall class 9 win in his Escort whilst Donald and Rachel Brooker, who skipped the event, won the championship in their BMW 130i.

Class 10 for Group N specification cars was won for the fourth time this season by Paisley driver Alasdair Graham and Alford co-driver Laura Stuart. The pair guided their Mitsubishi Lancer Evolution IX to twelfth overall, which netted them the class championship and a superb eighth overall in their first year with the Japanese machine.

Port William’s Fraser Wilson ended a fairly torrid year with second on the Galloway Hills despite “wooden” brakes on the first loop of stages. He and co-driver Craig Wallace finished just under thirty second behind Graham and Stuart in a similar Mitsubishi.

Dalbeattie driver Iain Wilson produced a superb drive on the his home event along with Haugh of Urr co-driver Keith Riddick to take the class 11 championship, while another local boy, Newton Stewart’s Mark McCulloch scooped up fourth overall and the class 12 championship.

John MacCrone won class 13 despite failing to finish the Castle Douglas event in his Fiesta R5.

Caroline Carslaw retained her Ladies title in 2016, with Grant MacRae taking the Juniors’ title won by Thomas Gray last year despite missing out on the class 2 spoils.

Grant Inglis backed up his class 8 championship win with the Scottish 2WD Championship title, edging out Thomas Gray and Duncan MacDonald with Angus Lawrie and Dougal Brown completing the top 5.

The SRC Challengers, for competitors who had not finished inside the top 10 of an MSA event in the past 10 years, has been a revelation this year, giving competitors something to really fight for and producing a four way fight for the title on the final round of the season.

Better still, Binnie achieved the result in an older Mitsubishi Lancer Evolution V, impressing many and marking his card as a star of the future.

Alasdair Graham and Laura Stuart took third in the category, just eight seconds behind Wilson and Riddick, but fourth for Banchory driver Scott McCombie and his Workington co-driver Mark Fisher was enough for them to become the SRC Challengers Champions in their Mitsubishi Lancer Evolution IX.

Ross MacDonald and Matthew Johnstone took fifth on the event to seal fourth in the points’ table in their first year with the Evo VIII.

The 2016 ARR Craib MSA Scottish Rally Championship will long live in the memory as a classic season’s rallying, which saw incredible title fights both for class and overall honours with Jock Armstrong sealing his second Scottish title on the final stage of the entire season.

Keep up to date with the championship in the off-season as we catch up with several drivers and look ahead to 2017.