McIlwraith trades Escort for Subaru in 2017 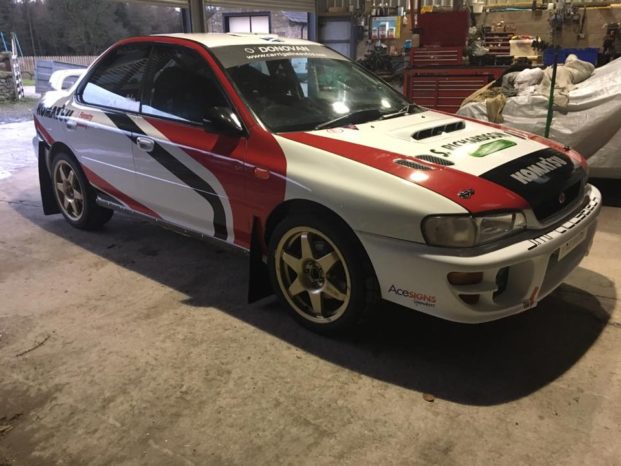 Canonbie driver John McIlwraith will mount a full assault on the 2017 ARR Craib MSA Scottish Rally Championship in a Subaru Impreza GC8. He will once again be co-driven by Duns’ Scott Young as the pair look to climb up the overall results.

McIlwraith, who came second in the epic 2016 class 5 battle at the wheel of his Mk2 Escort, has driven front wheel drive and real wheel drive cars before but has yet to sample four wheel drive machinery.

John explained his decision: “Trying four wheel drive is a bit of an ‘itch to scratch’ so to speak. With the Escort being a proper historic specification car it’s probably just a bit too valuable and expensive to fix since the MSA changed the rules on the running order.

“I’ve had the Impreza for over a year now, mainly rebuilding it. We’ve barely even had a test yet, but we should get some time in it before the Snowman.

“I’ve driven both rear wheel drive and front wheel drive now so the challenge will be to see what driving style works best [with four wheel drive.]”

In 2016, a new championship was introduced to the SRC in the www.usedcarparts.co.uk Subaru Cup, with John’s Impreza being eligible for the 2017 contest. Last year’s battle saw a good battle between Inverurie’s Matthew Thomson and Elgin’s Scott Mutch, and McIlwraith is keen to get in among it.

“We’re going to do the Subaru Cup,” he said. “It’s a great wee championship with the emphasis on keeping costs realistic.”

Spectators will have to adjust to seeing John and co-driver Scott Young in a new car, but the Escort is not gone for good, as McIlwraith explains.

“The Escort will be waiting in the wings for certain events. We’ve done the RAC twice with it and I wouldn’t say no to a third!

“I’d finally like to say a big thanks to all the sponsors and supporters who make things happen, and also a thank you to co-driver Scott Young for keeping us on the straight and narrow.”

The first round of the 2017 ARR Craib MSA Scottish Rally Championship is the Snowman Rally in Inverness on 18th February.

There’s plenty more happening regarding the championship before then however, not least the SRC’s presence at the Autosport International Show held in the NEC, Birmingham (12-15 January).

Keep an eye on the championship website www.scottishrallychampionship.co.uk and the official social media channels for all the latest.