Star Driver Award “felt like a win” for Mike Stuart 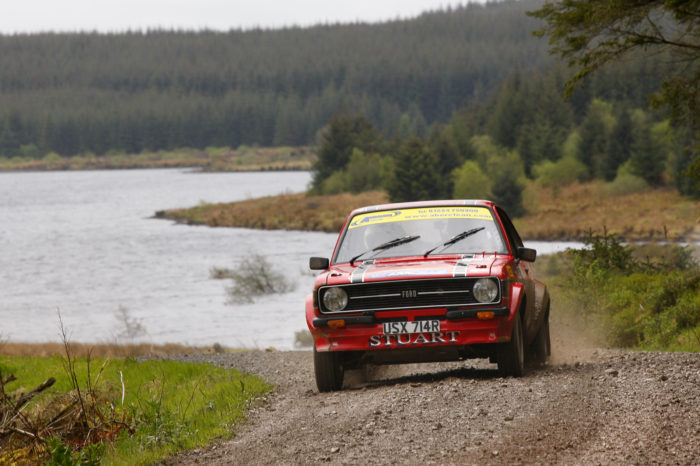 Alford driver Mike Stuart has had a superb start to the 2017 ARR Craib MSA Scottish Rally Championship at the wheel of his Ford Escort Mk2.

Stuart, co-driven by Sinclair Young, returned to the Scottish forests for the first time since 2010 on the Snowman in an Escort bought off his cousin and prepared by his dad.

Having taken four class podiums from four rounds so far this season, it’s been an impressive return for Stuart whose father Willie and sister Laura have also competed in the SRC.

“I watch the in-car after every event and after speaking with my navigator [Sinclair Young] I know myself there’s more to come, but I’m happy with the steady progression we are making.”

Stuart’s run to second in class seven and third in the Challengers on the RSAC Scottish Rally saw him receive the SRC John Horton Star Driver Award for round four; something that the Escort driver has been taken aback by.

“It’s hard to put it into words,” said a speechless Stuart. “The progression we’ve made since the start of the season is blowing my mind. We had a brilliant day with hardly any problems so to be up there with guys like Dougal [Brown] and Steve [Bannister] after just a few rallies is incredible.

“The Star Driver Award was something I wasn’t expecting. It’s one of those things you see on social media but I never once thought that I’d do enough to be nominated for the Award. I came home smiling from lug to lug and it felt like a rally win, it was just an unreal feeling. I was so happy to achieve the results that we did but this Award just topped it all off.”

Up next for Stuart and Young is the Dunoon Presents Argyll Stages Rally on Saturday 24th June. The objective there is just to get the car to the finish and bagging valuable points and seat time.

“I’d love to just go down to Dunoon and get a finish,” claimed Stuart, “before perhaps making a big push on the Grampian which as it’s my home event. I’m absolutely over the moon that I’ve managed to take it to it as well as I have though. Now we are just looking to push on and hopefully finish the rest of the season in a strong position, and maybe think about going full attack next year!”