While the men & women at the top of the field were grabbing all the Grampian headlines there were the usual battles going on amongst the clubmen and the classes.
Let’s see who came out on top. 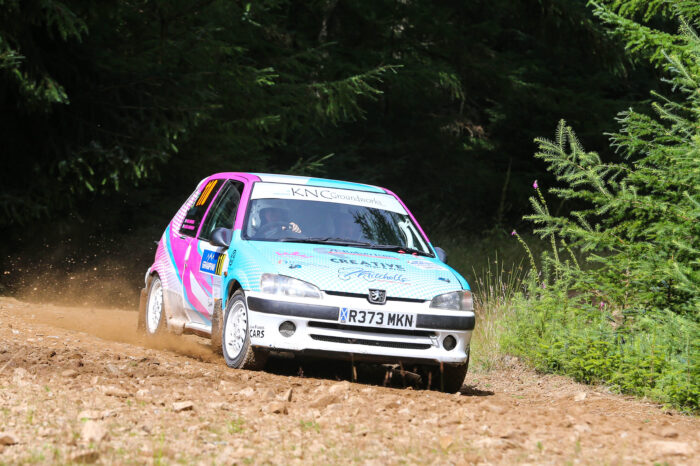 Class C2
The all-female Inverness crew of Nikki Addison & Rachel Matheson were the sole C2 runners. On their 1st rally since the 2020 Snowman they had an eventful day. They would use their wee 106 to tow the O’Kane’s Impreza back to service after SS2, which must have been an interesting sight on the road, before unfortunately retiring on the final loop with a suspected gearbox problem. 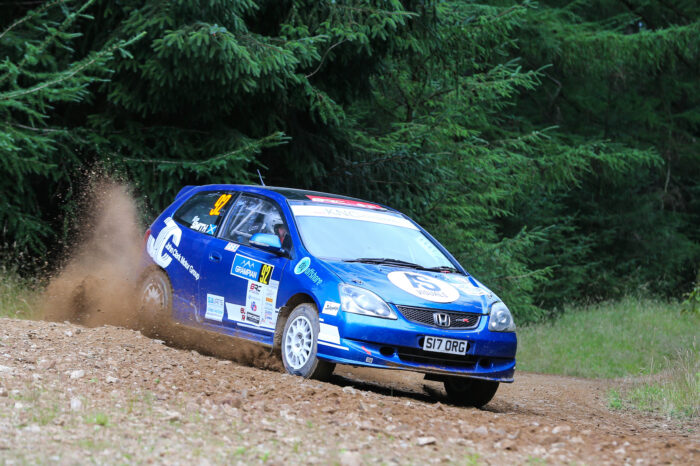 Class C3
After their early retirement on the Scottish another Inverness pairing, Allan Smith & Paul Beaton had a much better day out on the Grampian. Allan very happy with how the new car ran all day on the way to 59th Overall. 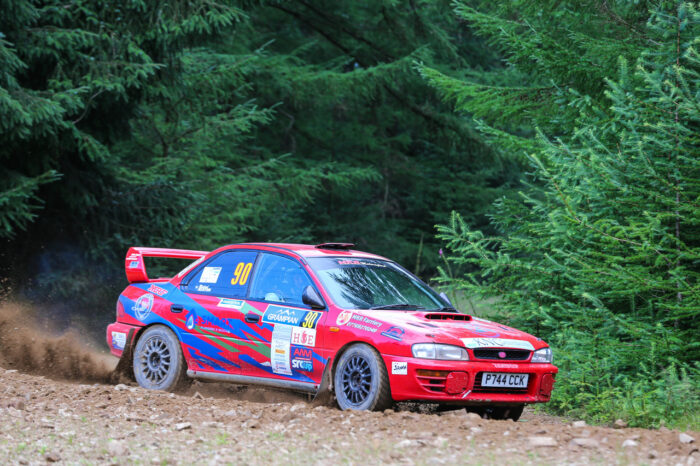 Class C5
Taking a 3rd win in C5 Michael Renton from Bonar Bridge & co-driver John Shepheard from Elgin enjoyed their day out in the forests. Spending most of the stages laughing at each other, their only real moment was an overshoot on the 2nd loop. 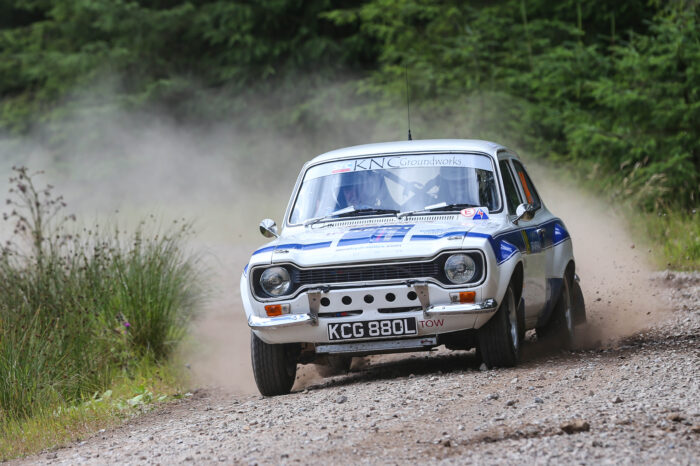 Class H1
Greenock’s Andy Kelly & Waterside resident Roy Campbell were delighted with a class win. Andy reckoned he was braking too early for things out on the stages and needed to be braver but was very happy with how well the car ran all day. 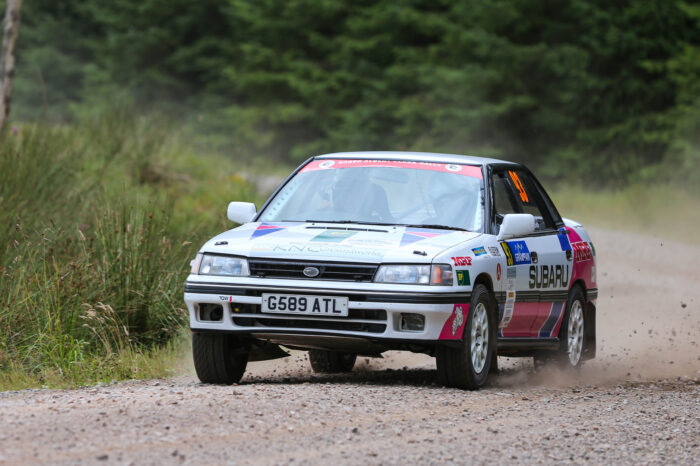 Class H2
When the Galant of Tom Coughtrie from Ayr & Mull’s Ian Fraser retired, Ballater’s Donald Brooker & son-in-law Tony Booth from Inverbervie were there to pick up the pieces, the Legacy finishing a solid 73rd overall and 1st in H2. 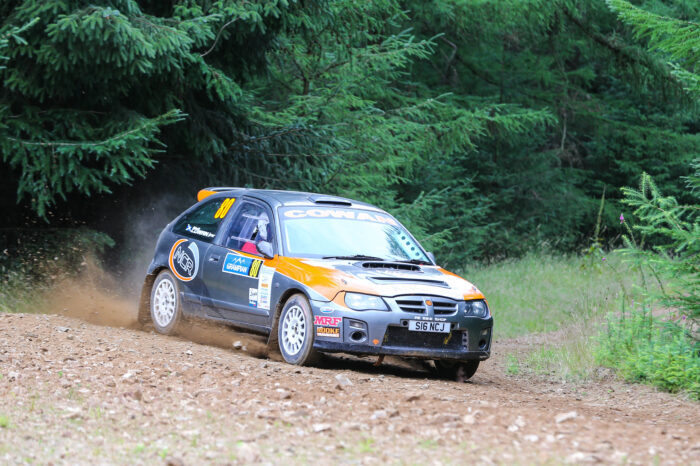 Class M2
The Mg ZR of the Auldgirth/Castle Douglas pairing Niall Cowan Jnr & Callum Shanks took the honours in M2. Catching a car in stage 2, Niall was confused when the horn wasn’t working. Turns out he’d switched the heater on instead and they spent the rest of the stage cooking. Beyond that they had to change a throttle cable in just 6 minutes in service and utilised a sledgehammer to make some subtle modifications to the sumpguard during the day. 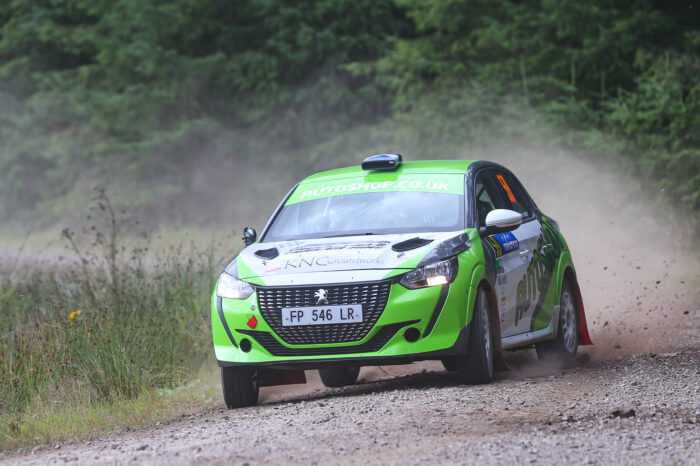 Class M3
Doonhamer Peter Stewart & Thornhill’s Harry Marchbank took a 2nd M3 win in a row in their new 208 R4. It wasn’t as smooth as the Scottish for the team, a puncture in SS4 cost time and Peter wasn’t as happy with the car’s setup. A couple of damper adjustments after advice from Mark McCulloch made things a lot better for the final loop and they would finish 46th overall. 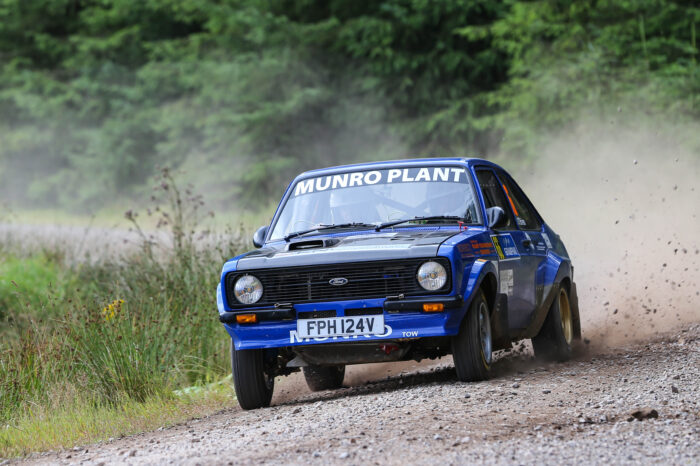 Class M4
Glenshiel’s Paddy Munro & Duns co-driver David O’Brien would take another M4 win. A much cleaner run than the Scottish, the only real problem was a broken windscreen and headlights suffered while trying to overtake another car. 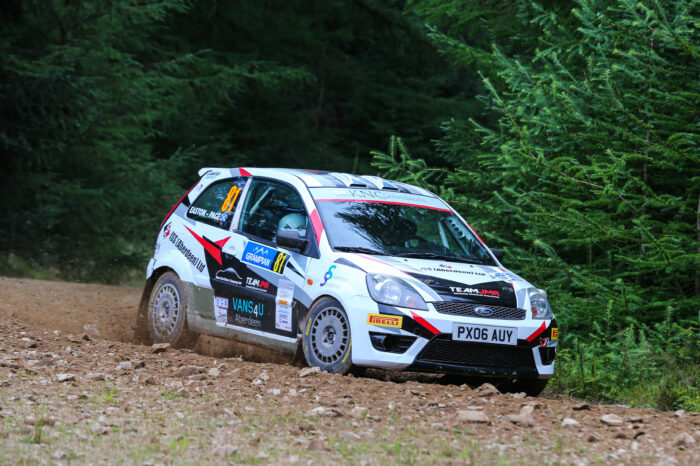 Class M5
Local crew Johnnie Mackay & Emily Easton-Page grabbed the M5 win. Johnnie pretty happy at the end of his home event despite a worry about the gearbox which started jumping out of 2nd gear on the final stage. Of course that’s the gear he needed the most….. 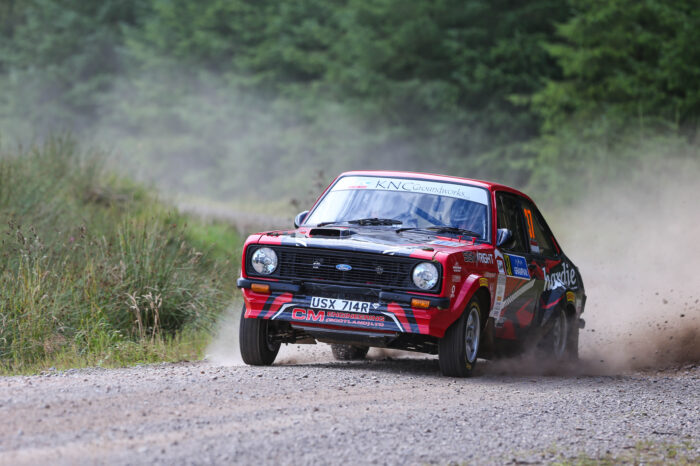 Class M6
The perfect season continued for Dumfries resident Mark McCulloch & Elgin’s Michael Hendry, taking their 3rd win of the season. It wasn’t as easy as it looked, a couple of moments early on when Mark wasn’t listening to Michael as well as he should were survived without damage. The Hardie MK2 team especially happy with beating Irish Escort legend Marty McCormack by just 8 seconds at the finish. 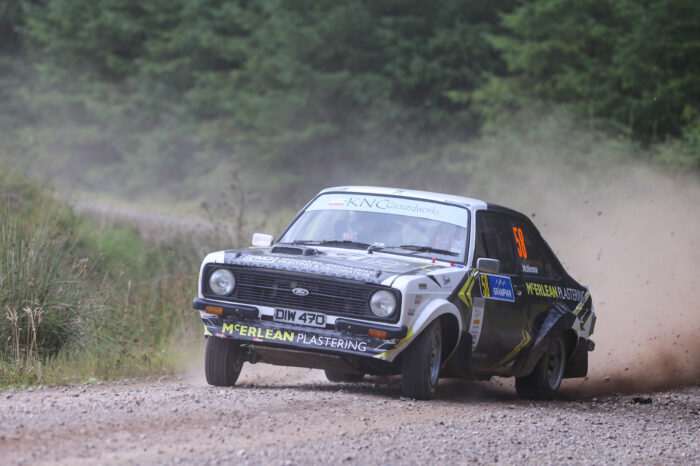 Class M7
Out on the gravel for the 1st time with the new engine, the Northern Irish Magherafelt/Omagh pairing of Paul McErlean & Niall McKenna were surprised to find the car was quite nice to drive on the loose. A broken diff brace was making the fast sections interesting but apart from that the only issue was tyre wear: a set of back tyres only lasting 18 miles….. 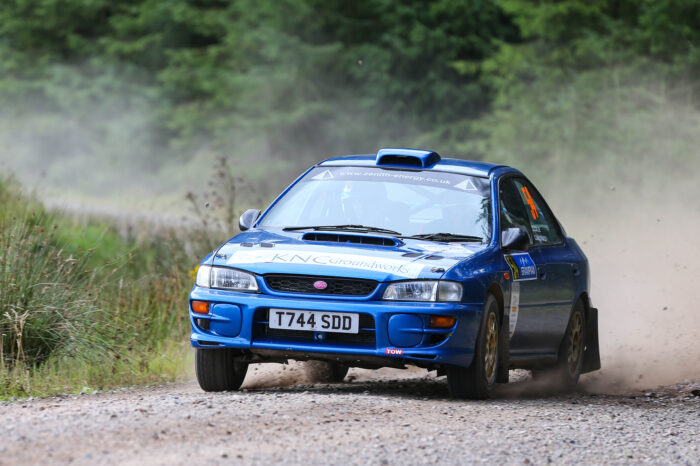 Class M8
Local crew Chris Collie & Gary McDonald went one better than their Scottish result with the M8 win. A small diff issue pre-rally meant no handbrake turns but the event went well, Chris happy to complete his home event with no damage. 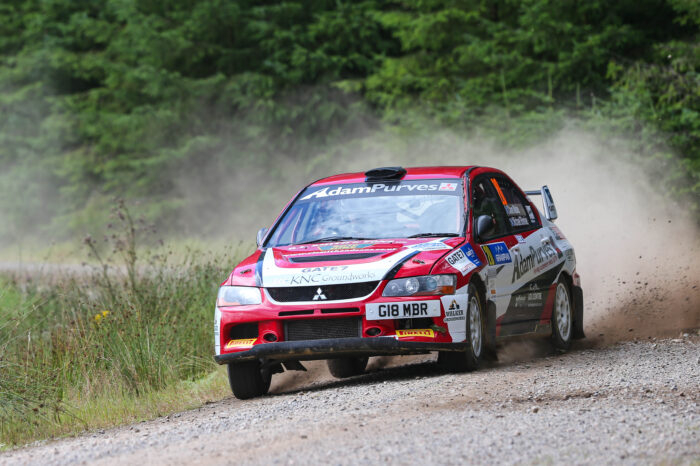 Class M9
Lying 3rd overall in the SRC going into the last stage, Cornhill-on-Tweed’s Michael Binnie & Duns’ Claire Mole were unable to hold the flying Freddie Milne back over the final test. 4th overall and an M9 win was still a very good result for the Evo crew, Michael very happy with how the new car is performing.