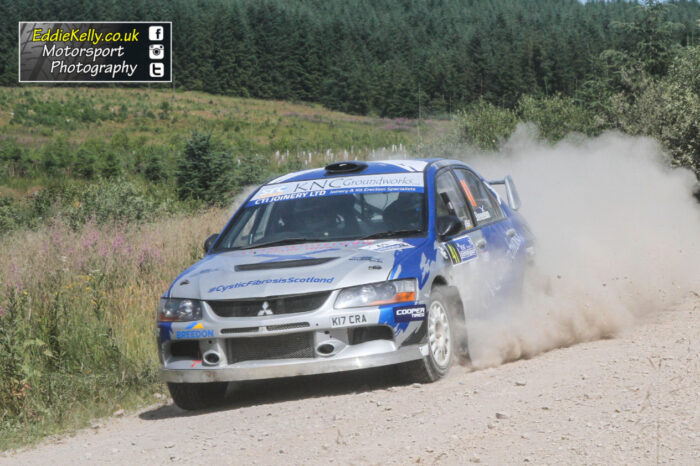 With the late withdrawal of Scottish winners David Bogie & John Rowan, championship leaders Jock Armstrong & Cammy Fair lead the SRC contingent away from the ceremonial start in Banchory from 9am. After an incredibly consistent start to the season with 2 second places, the crew are still adjusting to the Rally 2 Fiesta, with Jock planning a pre-event test to work on both left hand drive and car setup.

Garry Pearson & Niall Burns showed great pace on the Scottish in their 1st event in a Fabia R5 but experienced some bad luck. With both SRC and BRC National points on the line expect a big attack from the Duns driver.

First local driver, Argyll winner Freddie Milne was robbed of a chance to compete on the Scottish with a sensor failure in stage 1. The Fiesta pilot has proven he can win this year and should be one to watch in his home forests.

4th on the Scottish in the Rally 2 Fiesta, Rory Young & Allan Cathers are contesting the Grampian in the latest Rally 3 Fiesta, a 1.5 litre engined, 4wd car designed to be a step below the Rally 2 cars. This will be the 1st time we have seen a car of this spec in Scotland and no-one, including Rory, is sure of how it will go. Rory hoping it will bring back memories of his days in Group N Evos.

We were shown a brief glimpse on the Scottish of the fantastic rivalry between Bruce McCombie & John Wink, tied on time after 2 stages. Now the good friends are set to battle each other in their home forests. With both drivers sponsoring the event as well they will be determined to beat each other, mainly for the bragging rights at the post rally barbecue. That’s sure to be a good time….

Also in that mix we have the army of Evos. Michael Binnie, Donnie MacDonald, Scott Beattie, Richard Hill and Scott McCombie are all quick drivers in good cars, capable of challenging the Rally 2s and WRCs.

Ian Forgan & Chris Lees debuted their Fiesta R5 on the gravel on the Scottish and managed a fantastic top 10. With both crew members in the top 3 of the championship points it will be interesting to see how much quicker they can get as they get used to the car.

Heading up the 2wd crews, Mark McCulloch & Michael Hendry have had an almost perfect start to the season with 2 wins out of 2. With fellow fast Escort pilots Keith Robathan & Paul McErlean on the entry list they will have their work cut out to make it 3 out of 3.

Also in the 2wd mix Peter Stewart & Harry Marchbank burst onto the scene with their new 208 R4 on the Scottish. A fantastic debut for the new car saw them grab 2nd in the 2wd ranks and taking an excellent maximum points in the Albyn Garage Challengers category. With the BRC R4 crews in attendance at the Grampian Peter will be very interested to see how the new car compares, along with trying to annoy the big Escorts.

In the SRC Juniors battle it’s currently 1 each between Johnnie Mackay & Ewan Tindall. Both drivers have led a round this year and ended up on their roofs. Ewan will be another driver comparing himself to the BRC Juniors in similar machinery whereas Johnnie is looking forward to rekindling his Scottish battle with the MG of Niall Cowan Jnr, the 2 young guns separated by just 5 seconds at the end of the event.

In the Andrew Wood Motorsport Subaru Cup all the championship contenders are on the entry list. Scottish winners Michael Renton & John Shepheard repeating the mantra that the camaraderie amongst the Cup runners is fantastic and they have great fun winding each other up outside of the cars, although once the helmets go on, they are determined to come out on top.

The Grampian has been declared a non-spectator event which is understandably quite frustrating for many people keen to get back out to view the cars in the woods. The SRC Facebook page will once again feature 2 live stages throughout the day to hopefully fulfill your thirst for rallying.  Results will also be available throughout the day from flyingfinish.co.uk and you can keep track of the cars progress through the stages via the rallytracking website.

A seeded entry list is available to view/download under the Competitors tab from the event website at www.grampianforestrally.com.

Looking beyond the Grampian the regulations for the Armstrong Galloway Hills Rally have now been released with entries opening on Wednesday 11th August at 20:00.